Mark your calendars for the 2022 Summergrass Bluegrass Festival to be held August 19-21, 2022 at the Antique Gas and Steam Engine Museum in Vista, California. Here are some of the top flight acts on this year’s bill:
Danny Paisley and the Southern Grass 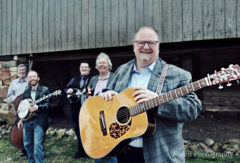 Danny Paisley and the Southern Grass have made their niche in the bluegrass world, producing consecutive chart-topping albums. The group has been given over 15 Bluegrass Music Award Nominations and won the 2009 IBMA Song of the Year for “Don’t Throw Mama’s Flowers Away.” Coincidentally, this award-winning song was co-written by then San Diegan Chris Stuart. In 2021, Danny Paisley joined an elite group of vocalists to be awarded the IBMA Male Vocalist of the Year for the third time, an achievement bestowed only to five others in bluegrass music history.
John Moore and Friends
In addition to having been the mandolinist, guitarist, and vocalist for the internationally acclaimed band Bluegrass Etc., John Moore was also the mandolinist with the award-winning band California, the International Bluegrass Music Association’s Instrumental Band of the Year three years in a row. He has appeared in productions by, and done musical soundtracks for, HBO, Paramount Pictures, Touchstone Pictures, and A&E Television Network. He most recently appeared in the HBO Series Deadwood and has appeared on the cover of Bluegrass Now, Bluegrass Unlimited, and Flatpick Guitar magazines. For Summergrass John has put together an amazing group, featuring John Cowan, Newgrass Revival Alum; Ron Block from Alison Krauss and Union Station; Brad Davis, “The Shredder,” who has toured with everyone from Earl Scruggs to Sam Bush, and Sara Watkins from Nickle Creek and I’m With Her.
Also on the bill are: Fast Track, Volume Five, Phil Salazar & the Kin Folk, Front Porch Music Preservation Society, Vulcan Mountain Boys, Marty Warburton & Home Girls, Virtual Strangers, Prairie Sky, and Sheri Lee & Friends. We’ll tell you more about these groups next month.
BLUEGRASS AND BEER 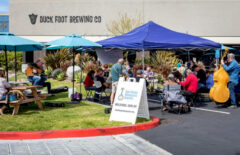 Bluegrass and beer at the Duckfoot Brewery.

For a growing group of San Diego musician and listeners, bluegrass and beer are starting to go together like peanut butter and jelly. Every fourth Sunday of the month, from 1-3pm, this group of folks gets together at the Duck Foot Brewery in Clairemont Mesa for music, food, and, of course, great beer. Duck Foot Brewery owner Matt Del Vecchio is an accomplished guitar player as well as the gracious host for the event, which is sponsored by the San Diego Bluegrass Society, our local nonprofit bluegrass organization. There’s an EZ up set up outside, with picnic tables for food and beer. And, there is seating and more music inside the brewery. Admission is free and all are welcome. Stop by for the fourth Sunday in June, on June 26.
GET INVOLVED

Want to get involved in local bluegrass activities? Consider joining the nonprofit San Diego Bluegrass Society. This all-volunteer organization puts on many events, including concerts, workshops, and jam sessions (including the Duck Foot jam highlighted above), slow-jam teaching sessions, a free school outreach program, instrument lending and donations, and more. Current dues are only $20 for the whole family for a year but are likely to be going up soon, so now is a great time to join. Check it all out at www.sandiegobluegrass.org

How to Enjoy a Bluegrass Music Festival

Live Bluegrass Events are Back!