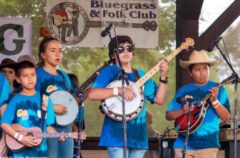 Kids are an important part of a bluegrass festival. Here we see kids on stage at Summergrass 2021. Photo by David Cupp.

If you’ve never been to a bluegrass music festival, you’re in luck. The Summergrass Festival is right here in Vista and coming up August 19-21. It has all of the above and more, including top national performers, a working blacksmith shop, antique farm equipment, a large weaving exhibit, an old school house, and a local train. Read all about it and get your tickets here: www.summergrass.net 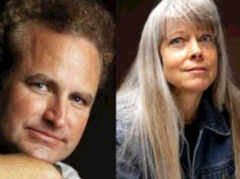 Chris Stuart and Janet Beazley got their start in San Diego.

Here at the San Diego Troubadour we give a shout out to some of our locals who have found great success in the bluegrass world. These folks all got their start in San Diego, and all have moved on to Nashville or places beyond. Going back a bit in time we honor Stuart Duncan who is now considered by many to be the greatest bluegrass fiddler of all time. Likewise, Alison Brown, who grew up in La Jolla, went on to banjo fame, and to become the co-founder of Compass Records. 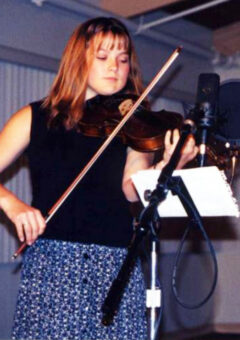 Young Sara Watkins at a SDBS event as a teenager… before Nickel Creek, the Grammy Awards, and the rest.

Also noteworthy from this generation we give a nod to Chris Stuart, Janet Beazley, Dennis Caplinger, and John Moore all of whom built strong reputations in the bluegrass world. We can’t forget Chris Thile, Sean Watkins, and Sara Watkins who took their band Nickel Creek to fame, and then on to even greater heights individually. These three all grew up in Vista. Finally, a tip of the hat to Tyler Grant who grew up in the Jamul area and who won the National Flatpicking Award and to John Mailander whose recent fiddle prowess and success have been remarkable.

Curious who might be the next youngsters from San Diego to hit the big time? Get on out to a bluegrass event or to a festival or concert. Pay attention to the kids and teenagers who are devouring this music and taking it to the next level. These will be the next stars, and you will be able to say you knew them when.