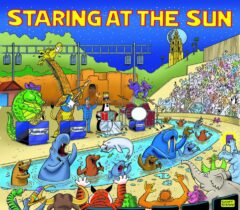 Staring at the Sun Vol. XIII.

The latest edition of Staring at the Sun, the free San Diego music compilation album, debuts this month with a special free event at the Casbah on September 30. Volume XIII celebrates San Diego’s music performers, San Diego’s comics artists, local music program Loudspeaker and Balboa Park, with 47 tracks on two CDs in a special six-panel jacket, featuring exclusive artwork from legendary comics artist Scott Shaw!
It’s an eclectic playlist, with songs from favorites such as the Sleepwalkers, the Monroes, Alvino & the Dwells, the Spice Pistols, Mittens, and the Wayne Riker Quintet, as well as rising talent such as Evening’s Empire, Tamar Berk, Sorry It’s Over, and Nathan Raney. Then there’s Electric Mud, Spiritual Motels, Enter the Blue Sky, the Original Starfires, Sometimes Julie, and the Dinettes. Meanwhile, Manual Scan, Pony Death Ride, Mojo Nixon, and Satanic Puppeteer Orchestra contribute radio station IDs. And that’s not even half of the artists included.
Pick up your free copy of Staring at the Sun XIII at the Casbah on September 30. The free show kicks off at 8 p.m., hosted by Hairy Scary Spice of the Spice Pistols and Bart Mendoza, with performers set to include Nathan Raney, Evening’s Empire, and more to be added. Notably the show will double as an album release event for Nathan Raney’s new album, Season of Serenity. Support Local Music!
www.casbahmusic.com
Five questions for Tamar Berk

Powerpop fans need to pick up a copy of Tamar Berk’s debut album, The Restless Dreams of Youth. An amazingly tuneful collection of songs, the album has real depth both lyrically and stylistically. And it’s full of earworms, such as moody introspective “Shadow Clues,” or bouncy, rockin’ “Better Off Meditating.” The songs couldn’t be more different, but they’re both just as good, the product of solid songcraft and arrangements. This month we ask Tamar Berk Five Questions:
Is there anything missing from your Discogs page?
It’s pretty accurate, although it doesn’t include all the fun little bands and guest appearances I made. One of my favorite tribute bands that I played in was called Deep Joy, a Small Faces cover band.
You have such a stylistically diverse discography – what’s your record collection like?
Everything from Abba to Zappa. For real. Currently, I’m on a big Genesis kick. I’ve a very big fan of the soft rock of the ’70s. The nostalgia of those tunes reminds me of the magic of growing up when radio stations ruled.
Who inspired you to play guitar?
Haha…well, the first guitar I bought was in Cleveland when I was a teen. I saved up for a Jumbo Yamaha acoustic. I was deeply inspired by Edie Brickell and the New Bohemians. I loved her band and her songs.

Was Starball your first band?
Yes, Starball was a power pop band that was my first band I formed when I lived in Chicago. You can still find some of those fun power pop tunes on Spotify!
You’ve performed with your husband in the Pynnacles, while your daughter also has her own band. What’s it like being in such a musical family?
Neither of my parents played music, but they put us in piano lessons as early as five years old! I learned mostly by ear since I had no patience to remember the notes. I would ask the piano teacher to play the songs over and over and knew about enough of the notes to make it happen. I’m very grateful for the background in piano. It’s helped me in all aspects of my writing. The question I thought should really be directed toward my daughter! She’s been hearing my husband and I play, record, and write since she was a tiny baby so it makes sense that she has emerged with her own amazing San Diego-based indie pop band called the Fluorescents. Check ‘em out!
www.tamarberk.bandcamp.com
What’s Your Favorite Cartoon Character?
Tamar Berk: Bugs Bunny because he was a smart ass.
Audrey Callahan: I always had a fondness for Ariel from the Little Mermaid. Her tenacity and courage when it came to MAKING her dreams a reality always spoke to me. Even though her entire community, with good intentions, tried to stop her from achieving something that was so important to her, she persevered and came out on top.
Troy Cook/Ready Set Survive: Popeye! He’s a great husband, he’s always promoting healthy eating habits, and always standing up against the big bully! 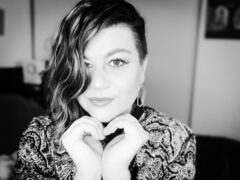 Lauren Leigh Martin: My favorite cartoon character is She-Ra. She was my favorite when I was like three and four years old. I used to call her Sheila and my babysitter would be so upset not knowing who Sheila was, or how to get her to me. My father loved He-Man and saying his catch phrase “I have the Power!” and so naturally I wanted a girl version of that, so She-Ra it was. I think they did an amazing job with the reboot on Netflix, and I watch it with my son.
Dave Preston: C’mon, I mean, who doesn’t love Fred Flintstone? Killer pad, hot wife, rad car, and he gets to operate a live crane!!
Monica Sorenson/Sometimes Julie: Old school: Bugs Bunny; Current: yhe Minions. Both are creative problem solvers with great senses of humor, and they are musical!