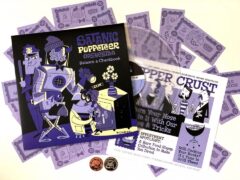 Goodies that come with SPO’s album. 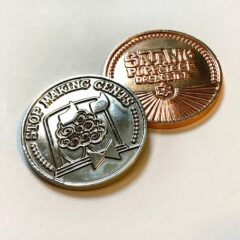 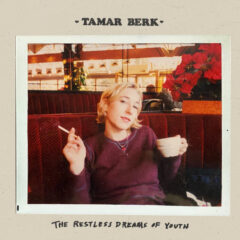 Tamar Berk: Very early on in my Starball years, we were playing a very big show at the House of Blues. My guitar strings broke and I didn’t bring a back-up guitar. Somebody came out with a very heavy Les Paul and while I was trying to adjust it and tune it, which felt like FOREVER when you’re on stage, the drummer got mad and walked off the stage. I started crying. I suppose that’s not very strange, just sad. Ha ha!
Audrey Callahan: You know, I haven’t ever had anything too strange happen at an event. Is THAT strange? Ha ha. My performances these days are all virtual, so maybe THAT’S strange enough.
Jim Basnight: I think the most remarkable thing that happened was when drummer Brad “Mr. D.” Dolsen and bassist Mikel Rollins and I were in Belgrade, Montana on a miserable icy and rainy night. The parking lot of the club (the Belgrade Lounge) was filled with deep potholes of ice and slush and we had to load gear through it, which got us all dirty, as the snow and ice weren’t anything close to fresh and had been blackened by soot. So, we were dirty looking and suitably tired from a series of Montana one nighters, which consisted of doing a gig, going to the room, coming back to the club in the morning to load out, driving on often tough roads for as much as 300 miles, setting up and doing it again for anywhere from 10-18 days in a row, with a day or two off somewhere. So, this guy, with white blond hair, a big guy who looked like a cross between a lumber jack and a polar bear staggers up to my mic as I’m singing a soft part of a song. I think it was “Champagne Supernova,” one of mine like “Summertime Again” or “The Rooster.” He was wearing brand new white gym shoes with not a smudge on them. A 300-pound six-foot-five plus guy, stumbling drunk and right in my face. So, he starts howling, like drunks do before they get 86’d or keel over, with their eyes rolling around in their heads and amazingly it’s on key. We were stunned. It was hilarious. We called him, “The Howler” and continued to play as if he was part of the band. The bartender finally coaxed him to get away from the stage and sat him down and served him another drink, shocking in and of itself. 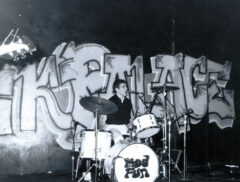 Chris Collins/Mod Fun: We went on tour and ended up playing a great gig at the Rock Palace in San Diego. We’d all recently seen the Three O’ Clock live and I’d even hung out with them in their dressing room at a gig in DC. We were taken with how much makeup they all wore when they were on stage. So, since the Rock Palace was a bigger venue with a lot of stage lighting, we thought we’d try that out ourselves. Unfortunately, we went waaaay over the top –especially me. I think I had some kind of foundation and maybe even eye shadow on in addition to my usual eyeliner. When we started to kick up the energy a few songs into our set and I began to sweat profusely, I really regretted choosing to wear all that makeup. It was dripping into my eyes, getting all over my clothes and generally making it really tough to play—or even see, for that matter. So, at the end of one song when I did a kind of signature flip of my drumstick, I missed catching it and it bounced off the rim of my snare drum and hit me square in the face. Not my most professional moment in front of an audience!
Troy Cook/Ready Set Survive: Back in 2005 my drummer jumped over his drummer at the end of our set and broke his collar bone! That was the end of that band.
Dave Preston: This is a trick question, because almost all of them are XXX rated! Being asked to sign a boob was a little weird, especially with my wife standing right next to me on stage. LOL. Plenty of bar fights, but thankfully not directed at the band, but boy I’ve seen some doozies 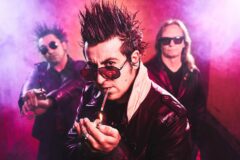 Christopher Leyva/Falling Doves: We were playing on the Wonderbus and we had a stop in the Gaslamp Quarter, so I jumped off the bus to play wireless lead guitar amongst the crowds on the street. I continued soloing and was getting ready to head back on the bus, when I grabbed onto a delivery truck that was at a stop sign and kept playing guitar while hanging off the back. It’s a good thing downtown traffic is so heavy and slow because that’s when the truck drove off, with me still attached. The sidewalk crowd was enjoying the show as I jumped off the moving truck, triumphantly. Unfortunately, my landing wasn’t so triumphant, and I sort of rolled into the middle of the intersection, guitar in hand. Everything sort of paused for a second. The band never missed a beat however and I got up and quickly made my way back to the Wonderbus to finish the song. The point of leaving the bus was to get everyone on the street’s attention. Mission accomplished. There’s a video out there, if you watch it you’ll get to see a real Falling Dove.
Satanic Puppeteer Orchestra: Usually all of the strangest stuff that’s happening on stage is by design. We once did a rock ‘n’ roll seance where we channeled the spirits of rock stars to pull off cover songs we didn’t bother to learn. SPO-20 officiated a wedding for the members of Burning of Rome and then we were at the reception band immediately afterwards. We smashed a pinata filled with rubber snakes. We made a call to Miss Cleo and the Psychic Network while we were on stage at a car wash. It’s tough to pick a favorite. Maybe the duet of a Neil Diamond cover between the robot and Spencer Moody of the Murder City Devils? That one’s pretty high on the list.
Stefanie Schmitz: While playing at the South Park Walkabout in front of a business, a couple walked inside the shop and left their two dogs outside in the front row facing us. Those adorable dogs sat motionless for an entire song. Our most attentive audience members yet!
Billy Tisch: I was up playing on the bar at Foggy’s Notion across from the Sports Arena, stepping between the drinks, and leaned over to play my saxophone to this pretty lady and there was a California License Plate that said “SAX.” It was then I knew that living in California was my dream come true and the crowd went wild!!!! And I didn’t spill a drink.

Staring at the Sun XIII