This month we ask five questions of new world music group, Slack Key Ohana, featuring Brian Witkin and Kamaka Mullen. As the name implies, the duo specializes in modern Hawaiian music via slack key guitar and a vocal sound that echoes the likes of Hawthorne’s Wilson brothers. On December 3, Slack Key Ohana releases their debut self-titled Pacific Records EP. Notably, the album’s front cover art is by Tom “Thor” Thordarson, a Hawaiian artist who is known for his work with Disney. First up though, Slack Key Ohana releases a single “Hanalei Moon,” exclusively with Apple Music / iTunes on November 17.
Slack Key Ohana
What was the first song you recorded for this project and how did you choose it?

Kamaka: The first song we recorded was called “Hanalei Moon.” My Kumu Hula was from Kauaʻi and the last song she taught me was “Hanalei Moon,” for hula dancing. So, to honor my Kumu and my last Hālau (Hālau Hula o Kāʻeo), I thought we should record that particular song. I already had the harmonies and call-and-response laid out. I knew that nobody had ever created a version like mine. But then Brian took his own notions and sweetened the pot. Brian just kept adding layers of instrumentation and harmonies to it, and it became the Brian Show for a bit. So naturally I tried to one up him and add more cool stuff to it. Once we were done, we looked at each other and said, “That’s it!” We were like, “There is no way we can replicate this again!”
Did “Hanalei Moon” set the template for the rest of the EP?
Kamaka: Naturally, Brian’s producer side clicked in. He said, “Each song we create from now on has to be as good as ‘Hanalei Moon.’” I thought it wasn’t possible, but the next song was even better. We called it the “Hanalei Treatment” when we made that magic happen again. Then for each subsequent song we kept raising the bar again and again. Now it’s the “Slack Key ʻOhana’ Treatment.” You know when we make the song as great as our standards can be, I just hope our fans love our music as much as we love performing it.
How did pedal steel player Rand Anderson contribute to the sessions? 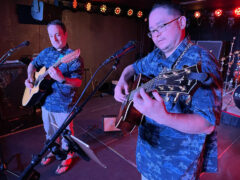 Kamaka: The second song on Side A is “Kahuku Slack Key,” which is the first song my Kumu Slack Key Patrick Landeza taught to me. It was also the first slack key song I taught to Brian. It felt only natural to put it on our first album together. Brian wrote the slack key guitar harmonies to it and then we added pedal steel by the multi-talented Rand Anderson to give it that old Hawai’i vibe to it. Once we heard the pedal steel, we were like, “Should we have him do the rest of the album too?” It was a unanimous “yes”!
How traditional is your sound? Do you incorporate Beach Boys-type vocals?
Kamaka: We tried to channel a little bit of Elvis Presley and the Beach Boys into our harmonies. We figured, if we want to sound vintage, let’s go all the way with it. As for traditional, our instrumentals are very true to their origins as part of our slack key lineage, we just added vocals on top of it to give it an exciting layer to enjoy. As for the slack key open tuning, they are true to our roots and are not much different than the way my Kumu’s (Patrick Landeza) Kumu, Raymond Kāne would have played the same songs. We stay true to our roots while also pushing the envelope as to what slack key can mean to a new generation of slackers.
What’s your favorite thing about Slack Key Ohana?
Kamaka: It’s rare to have a fellow musician with whom you can mesh together so easily; you never know if you are going to clash with someone until you play with them.
Brian: Ditto on the harmonies, that’s the best. Any excuse to play music is great, too, and we do vibe well musically together—we’ve got chemistry. “
Catch Slack Key Ohana’s live schedule or preview a song off their upcoming record by visiting: https://slackkeyohana.com