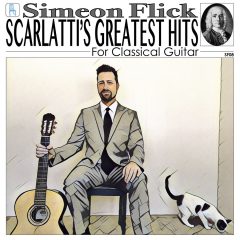 I am thankful that Flick chose to record pieces by Scarlatti. During the 1930s through the 1970s, the Naples-born composer enjoyed a great deal of popularity in this country’s concert halls, suffering a reduction in performance only during the years that the U.S. was involved in World War II. Concerts and recordings skyrocketed during the 1980s, largely due to music programmers and musicians taking note of Scarlatti’s 300th birthday.

(The divorce of music and class goes back further than the 2000s; after all, Town and Country chose to feature the Rolling Stones with a debutante on the cover of their magazine way back in1966. The cover was meant to be at least partially ironic, a class juxtaposition, but the editors certainly knew that something was afoot as their daughters chose Paul Revere and the Raiders to play on the hi-fi set over the LPs of Scriabin and Bruckner.)

Now, in 2020, the coronavirus pandemic has emptied concert halls and left the fate of classical music—well, for that matter, the fate of all live-performed music—in the hands of epidemiologists, politicians, and the makers of decent facemasks. The strains of Scarlatti are a rarity now, so it’s I am delighted that Flick chose to release this CD at this time.

These sonatas were composed for the keyboards of Scarlatti’s day: the harpsichord and the early pianoforte, the forerunner of today’s piano. Performed on piano, the clarity and brilliance of Scarlatti is revealed. In the hands of a Horowitz or Lang Lang Sacarlatti can be as bracing as cool sea spray at dawn.

The influence of guitar, however, on the Baroque composer is unmistakable. You can hear it in the composer’s use of tremolo notes as well as the use of tonalities and dissonances associated with Iberia, which is thought of as the home of classical guitar. When Scarlatti is performed on classical guitar, it’s almost as though the guitar could have been the instrument originally intended by the composer. The warmth of the guitar brings out the Scarlatti’s lyricism. The richer timbres evoke subtleties and emotions of the compositions that can be obscured by keyboard instruments. Performed on piano, the tremolos can sound busy; on guitar, they are beautiful.

Scarlatti’s sonatas are dense. Flick’s transcriptions open up these compositions with a little more space. His playing, as well, is delightful. We San Diegans are familiar with Flick’s performances as a singer/songwriter as well as being a member of noteworthy musical projects, but he holds a bachelor’s degree in classical guitar performance from the University of Redlands and trained with the distinguished classical guitarist Christopher Parkening.

The recording—all the microphone placements, knob turning, and recording studio technics—were performed to a fare-the-well, with just enough reverb to give a sense of the ambience of a small performance hall without muddying the clarity of the guitar. The tonal quality of the guitar is balanced throughout, from the lowest bass to the highest notes on the fingerboard.

Scarlatti’s Greatest Hits for Classical Guitar is a welcome addition to the catalogue of guitar transcriptions of Scarlatti and is highly recommended for any serious music lover.

STEFAN HILLESHEIM: On My Own