February 2023
Vol. 22, No. 5
San Diego Was Smokin’ by Lyle DuplessieApril 2018
Examining Bob Dylan’s Love Sick Blues by Ted BurkeApril 2018
John Densmore: An Invitation to Dance on Fire by Terry RolandApril 2018
A Father’s Day Story: The Courtship of Harry Nilsson’s Son, Zak by Terry Paul RolandApril 2018
Jazz 88 Keeps Pumping Out the Tunes: Station persists despite numerous challenges over the years, including Coronavirus by Michael J. Williams and Jim TrageserApril 2018
Me and Ronnie Earl by Eric LiebermanApril 2018
Lawrence Ferlinghetti: America’s Poet by Ted BurkeApril 2018
Q & A with Gabe Lapano: After the Rain and Beyond by Andy RasmussenApril 2018
Remembering Sam Hinton by Paul HomiczApril 2018
Band of Brothers: The Liggins Brothers by Bart MendozaApril 2018
Advertisements 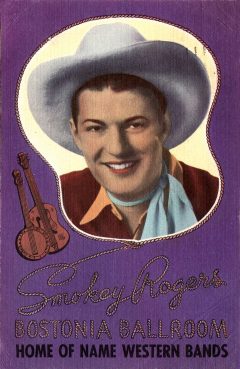 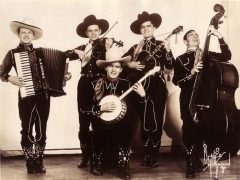 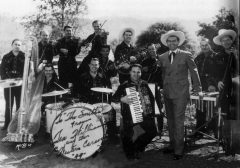 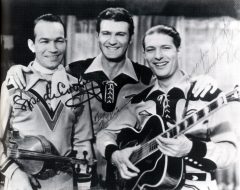 Back before Nashville became “the home of country music,” and the music was still called country and western, the San Diego area was a major center for the genre. The 1930s brought thousands of Dust Bowl refugees into the state, while the 1940s and the outbreak of World War II brought even more folks from all over rural America to California. Many of these people wound up in the San Diego area as part of the U.S. military or worked in the defense industry. When these people arrived in town, they brought with them their culture, including their musical tastes. One of the characters to arrive on the local scene during this period was Eugene “Smokey” Rogers. Smokey became a colorful fixture in the area from the 1940s through the early part of the 1960s. Smokey first hit the big time in 1935 when he began playing banjo for Texas Jim Lewis and His Lone Star Cowboys. Texas Jim was one of the pioneers of Western Swing but became most noted for his novelty numbers. His music centered around his cacophonous invention called the Hootenanny, an odd collection of washboards, horns, bells, sirens, clackers, whistles, guns, and just about anything else that could stir up a ruckus.

When Texas Jim was drafted in 1942, he turned over the reins to his fiddle player, Spade Cooley. Spade promptly changed the band’s name to the Spade Cooley Orchestra, and Smokey went to work for Spade. But ol’ Spade had a lead vocalist and guitar player by the name of “Tex” Williams. Besides being a talented performer, Tex was a handsome devil, which landed him starring roles in several B westerns of the day. Smokey was often featured in these movies as well. In short order, Tex became a star in his own right and the inevitable rift developed between Tex and Spade. Soon Tex lit out and took with him Smokey and most of the band.

In 1946 Tex formed his Western Caravan. Smokey, along with buddies Andre “Cactus” Soldi and Larry “Pedro” DePaul, became equal partners with Tex. They soon formed a home base to play the Palace Barn in Riverside. In 1947 the Western Caravan scored a major hit with “Smoke, Smoke, Smoke That Cigarette” (that’s right, the same song was covered by Commander Cody and his Lost Planet Airmen in the early 1970s). With this hit, the band produced more radio shows and movie shorts and toured all over the country. Upon returning to Riverside, they found themselves hosting a weekly NBC television show. You could say that the boys hit pay dirt. But by 1949 the wheels came off this wagon, too, with Tex moving on in search of greener pastures.

When Tex rode off into the sunset, Smokey went into full gallop. Smokey, along with his partners Cactus and Pedro, was soon staking claim to San Diego’s Western Caravan entertainment scene. Smokey and the boys also took over the ownership and operation of one of the nation’s foremost country and western watering holes and entertainment hot spots, the Bostonia Ballroom in El Cajon. From about 1950 to the early years of the ’60s, every major country-western entertainer passed through the Ballroom. Hank Williams, Hank Thompson, Patsy Cline, Johnny Cash, Johnny Horton, Lefty Frizzell, Marty Robbins, Brenda Lee, Terry Preston (aka Ferlin Husky), a very young Willie Nelson, and Jerry Lee Lewis were just a few of the featured acts to play there.

Also in the late 1940s, Smokey lassoed another gig with local KFMB-TV. Smokey and the band hosted an afternoon variety show five days a week. In the beginning, the show was on four hours a day, but as more network shows moved in, the show was cut to three hours, then down to two. The show lasted six and a half years.

While hosting the TV show, Smokey still had plenty of other chores. The Western Caravan played every weekend at the Bostonia Ballroom, adjacent to which a radio station was soon broadcasting. Smokey and his partners bought Valley Music, still owned and operated by the Soldi family to this day (in 2001).

In 1957, Ferlin Husky scored a major hit with the Smokey Rogers-penned composition “Gone.” In addition to being one of the most melancholy country songs ever recorded, it marked the beginning of the new, more polished and less twangy Nashville sound. “Gone” was a masterpiece, with heart-wrenching lyrics, a stellar vocal delivery by Ferlin, and a polished studio production, which was not strangled in sap and syrup. As a result, the song became a hit on rock radio as well.

But alas, all good things come to an end. In the early 1960s, Smokey, Cactus, and Pedro dissolved their partnership. Smokey took over full ownership of the Bostonia Ballroom but sold it a couple of years later. Though Smokey continued to perform and record, the momentum was gone. In the 1970s Lou Curtiss was able to get Smokey to perform at three San Diego Folk Festivals. Indeed, by that time Western Swing was becoming a forgotten American musical art form.

Smokey passed away in November 1993. He was the consummate entertainer and a major figure and link in the history of the San Diego-area music scene.

(Special thanks to Liz Abbott, Lou Curtiss, Andrea Long, Jim Soldi, and Tommy Turman for information used in this article. NOTE: This article is a reprint from November 2001.)

NOTES FROM A TRUCK STOP: The Drunken Fool