January 2023
Vol. 22, No. 4
NOTES FROM A TRUCK STOP: The Drunken Fool by Jimmy â€œDieselâ€ WhiteMay 2018
Examining Bob Dylan’s Love Sick Blues by Ted BurkeMay 2018
John Densmore: An Invitation to Dance on Fire by Terry RolandMay 2018
A Father’s Day Story: The Courtship of Harry Nilsson’s Son, Zak by Terry Paul RolandMay 2018
Jazz 88 Keeps Pumping Out the Tunes: Station persists despite numerous challenges over the years, including Coronavirus by Michael J. Williams and Jim TrageserMay 2018
Me and Ronnie Earl by Eric LiebermanMay 2018
Lawrence Ferlinghetti: America’s Poet by Ted BurkeMay 2018
Q & A with Gabe Lapano: After the Rain and Beyond by Andy RasmussenMay 2018
Remembering Sam Hinton by Paul HomiczMay 2018
Band of Brothers: The Liggins Brothers by Bart MendozaMay 2018
Advertisements 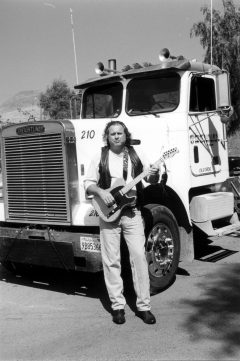 The desert is a hot place. A hot place to work. A hot place to sleep. A hot place to do anything, but there we all stood. Yes, we, just a bunch of us hard-core desert truckers, waiting outside a desert bar oasis known as the “Whispering Palms.” A sort of whiskey oasis for the local desert folk. One of those obscure “joints” you see in those lonesome movies, where trains howl and click-clack in the distance. We were all waiting to hear a local musician who drove from dive to dive desert bars to sing and howl honkytonk songs in a rare language, known only to a few as “Texican.” When heard by the human ear, well, it has a kind of drawl mixed in with some broken Spanish and coyote sounds. So when you sing like that with an old beat-up guitar, it’s mesmerizing, to say the least, especially when one is on the swill!

So, there we stood waiting in the hot solar winds, waiting for this honkytonk fool. I spent my wait talking to an old hippie-type trucker friend named Larry Sunquist and his mangy dog Alice. One of those Queensland type bitches that bark at the wind. Larry was a true vintage trucker. He drives a 1948 Kenworth with big fat straight stacks that are loud–very loud–so loud that Larry wears ear plugs. As we talked and waited for this singing joker, I shared some things with him about the truck-driving song articles I had written in the “Troub” and as I inadvertently stooped to pet Alice, the mangy dog, I heard Larry scream “Nooooooo, don’t do that!” Apparently the last poor soul who tried to pet Alice, the mangy mutt, had severe, and I do mean severe, lacerations to the hand and wrist. A terrible incident that Larry and the mutt wanted to put behind them forever, so we just threw an old flattened bicycle inner tube for her to chase and bite!

Finally, an old Cadillac Coupe de Ville pulls up and parks crooked. We thought nothing about it, just another bum crawling in for his daily shot of mescal. He appeared to be someone in his mid-40s, who hadn’t shaved for a week. The shirt he was wearing was a typical western-style shirt with some Indian design on it, but the shirt was buttoned crooked. Boots? Oh, yeah! But worn, very worn, with a hole in one of them. Slicked back hair and a gap between his front teeth told me he was probably just fired from some carnival where he was running the tilt-a-whirl too fast and made some preacher’s daughter throw up. Nevertheless, just another desert bum. But it was him.

Taking out a guitar case from the trunk of the Coupe de Ville and staggering a bit made us want to color ourselves gone. How could this guy pull off a gig like this? How could he win our poor lonesome souls to the drunken guitar twangs we loved so much? I had heard about these types before, you know, like Lefty Frizell who would walk to the stage many times with the shakes yet perform without a flaw. Or how about no-show “Jones”? We were here to eat cheese cut by a rusty knife, eat raw jalapeÃ±o peppers and wash them down with rot-gut tequila. Then we would sweat to the sound of good honky tonk. But this guy! I don’t know. When he passed us, you could smell the spent liquor on his breath, blood-shot eyes, and two days worth of cigarette smoke on his clothes. His name? Well, I asked the bartender. Back came a booming response with a definite tone of disgust. “Calvin Collier is the name of this moron, and he better not start another fight like he did the last time.”

Down went the sun and then came the dusk of the desert I love so much. The wind still blew and rattled the doors. We all waited for some down-home tunes. This guy was known for taking some of the old country-style Rolling Stones songs like “It’s All Over Now” and “Dead Flowers” and making them sound like real “country tonk.” Then came the sound of a stool being dragged across the stage floor as though on purpose, along with a stupid smirk on Calvin’s face. Tuning his guitar was a performance in itself. I knew about different tunings for play, so when I hollered out “whad’ya tune ‘er to?” he just smirked again and, with a shrug, said in Texican, “What’ eva I ahfaalen like I guessum,” so I chalked it up as another lost cause. At least we had our tequila and “peppas.” And so Calvin started to play, and we sat there, not moving, and wondered was it the tequila or the music? This guy was beltin’ it out with all the soul and dusty grit he could muster up. We sat for two long hours cryin’ in our drinks and feelin’ so bad that suicide was the only option of escaping the song’s sad feeling. How can a man look so down on his luck and sound so good when he sings? Calvin did a version of the late great Roy Orbison song called “Blue Bayou” that could make a cactus cry at noon.

Our good time was cut short, however, when I saw the look in his eye. A look of “upcoming events” if you know what I mean! In other words, the liquor tank was full and overflow was imminent. He vomited on stage right in front of God and the audience! The swamp cooler quickly carried the fragrance throughout the joint and the barkeeper kept yellin’, “Get out now!” Poor Calvin. He tried to regroup and start a new song, but the party was over. Everyone milled about and slowly drifted away toward the dusty desert air for a breath of fresh dust.

I felt sorry for Calvin, sorry for the years of a great talent gone to waste. The scourge of alcohol, the lack of money, and no doubt many lost loves. Why did he continue, why go on and on, not knowing what the next gig will bring or take out of him? As Calvin walked past me, I nodded and smiled. “I love your stuff man,” I said, while at the same time an old lady could be heard sayin’ “the drunken fool.” Those words passed through him like the Texas wind. Walking past me, I saw him take in a deep breath of the desert air and look long and hard up at the starlight. He gave so much when he sang, I wondered to myself what secrets he kept to himself.

So there went Calvin and, as he walked toward the rusty old Coupe de Ville, he couldn’t help but notice that 1948 Kenworth of Larry’s, and I could hear Calvin say, “Ah love dem ol bhaaaag trucks.“ So, for a moment, Calvin savored the old beast until he noticed the mangy dog and wondering what her name was, he asked me, “Whet’s the name a da nice pooch?“ Without warning he leaned down to pet Alice and as Larry ran to his aid, I heard Larry say, ”the drunken fool.” “Well,” I said with a sigh. “Time to take this white trash on down the road.”

C’mon Baby Take a Chance with Us: Breaking Down the Doors

My Brother Was a Mother: A Zappa Family Odyssey