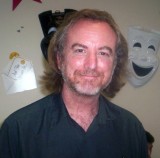 It’s another sleepless night. It’s 3am and Warren Zevon sings, “keep me in your heart for a while.” My writing assignment for this month finds me wishing we could all stay in each others hearts for a while, or for more than a while. To the founders Ellen and Lyle Duplessie, Liz Abbott, and Kent Johnson I offer gratitude for the opportunity the San Diego Troubadour has given me to immerse myself in the music and its makers. At first glance it’s been a chance to rub shoulders with such talented, legendary, and famous artists. But, taking a deeper look, writing for the Troubadour these past three years, has been much more. Five years ago, after decades of writing songs and poetry and sending it to the wind, a fire lit inside of me to shine a light on the unsung heroes of the music I’ve loved for the last 50 years. I wrote three articles. The first was for L.A’s FolkWorks about Richie Furay of Buffalo Springfield and Poco. The second was also for the same FolkWorks, about my friend Barry McGuire and his new show, Trippin’ the ’60s. The third article, unpublished at the time, it has since been posted online through No Depression, was a memorial tribute to San Diego native and one of the key founders of Americana music, John Stewart of the Kingston Trio and “Daydream Believer,” fame. I sent all three to Liz and I was hired, even though I live in the L.A. area, to cover out-of-town artists for the Highway’s Song column. The first thing Liz said to me was, “We don’t pay much.” My response was, “You mean, you pay???”

That opened the door to a series of features and interviews on some of the artists I’ve most loved and to be able to answer the call I felt as a writer to bring to light those artists who just don’t always get the notice they deserve. Along the way, in no particular order, I can tell you in a word salad my impressions and experiences along the way.

One of the great advantages of working for the Troubadour has been the names its allowed me to drop. This article is that golden opportunity to pick a lot of those names up and see just what they’ve meant to me and perhaps to a few readers out there.

One of my first assignments was Terry Hendrix. She is a Texas Hill Country singer-songwriter whose mentor taught her how to survive by educating her in the business of goat farming. A Texas Buddhist teacher-mentor relationship that brought her growth as an artist. My first interview was with Herb Pedersen who gave me the low-down on just what pure bluegrass is in style and performance. He said something about one-mic and limited electronics. Chris Hillman then painted his own picture of a 15-year-old kid taking a train from San Diego to San Francisco just to learn mandolin after seeing Clarence and Roland White in the Kentucky Colonels at the Ash Grove in Santa Monica. He also gave me his most famous quote: “Back in the early ’60s real surfers didn’t play surf music. Real surfers played bluegrass.” During an interview with Geoff Muldaur, he told me how, as a very young man, he got drunk and drove to Texas and found Blind Lemon Jefferson’s grave, bought a broom, and swept it clean as the blues great had requested in his song, “When I Die See That My Grave Is Kept Clean.” Then there was the pleasure of spending hours interviewing John Stewart’s widow, Buffy Ford-Stewart, relating her insightful stories of John and his final days in San Diego. Interviewing Ian Tyson by phone while he sat in his box canyon cabin in amidst the blue winter winds of Canada, was quite a challenge. He talked about the disappearing wilderness and the unfenced frontier. I didn’t think I we had much of an interview. He nearly out-silenced Gary Cooper. But, it stands as one of my best published interviews.

Then there were those interviews with like-minded artists who I feel such a connection from it seems like a fate encounter. David Wilcox inspired me to get out and write my own songs. His insights were stunning. His attitude certain, humble, but right-sized and real. With knees shaking and voice at near a quiver, I talked with the Doors lead guitarist, Robbie Krieger, last year. He was cooler than cool. The very definition of cool in attitude as he talked of how Miles Davis inspired his guitar playing and how his latest project was modeled on Miles iconic Sketches of Spain. I found a kindred spirit in Iris Dement who grew up listening to her mother sing old gospel hymns, which is where she found her strongest connection for her own songwriting to develop and grow. The article I wrote about her in 2009 was also about her mother’s influence. She was born into a large Arkansas family but raised in Orange County, California. I was born into a large, Texas family and raised on the South Bay in California. When we met she held my hand and gave me an appreciative squeeze, letting me know she got the message about her mother. Talking to Sarah Lee Guthrie on the phone from Florida while kids laughed and shouted in the background and her mom, Jackie, made espresso, was quite an experience. We talked in the early morning about the impact of Woody and Arlo on her life and spirit. Then there was backstage at 2010’s, The Guthrie Family Rides Again, show with Arlo, Sarah Lee, and generations of Guthries walking by me, around me, even stepping on my feet(that was the grandkids). I think my whole world lit up as I was being introduced to Sarah Lee and her husband Johnny and Sarah Lee finished my name before the person doing the introducing could.

If I had not written the feature piece on Booker T Jones, I never would’ve known how important he was to both Civil Rights (one of the first integrated bands) and to keeping real good music alive during the pre-Beatle ’60s. Seeing him and meeting him in Poway was beyond cool. The man was sheer elegance and eloquence, a strong but quiet talent leaving plenty of space for his band of young musicians. Brian Wilson’s daughter, Carnie Wilson, was open and candid and came to tears when she talked about Brian, but also with pride when she described her own musical accomplishments with Wilson Phillips and her solo records. Singer-songwriter, Jesse Winchester, spoke with humility and somewhat apologetically about leaving the country for Canada during the Vietnam War. He also nearly busted my eardrum when he found something I said that was funny. He had a great laugh. There was a strong sense of connection with the great Mary Gauthier when we chatted about spirituality, recovery and her latest project, last year’s fine The Foundling, about her struggles with being adopted and her search for her birth mother. After a great interview with dobro and steel great, Cindy Cashdollar, she made sure she called me back to let me know she had failed to mention a key influence on her steel playing, Marion Hall, a musician from an obscure L.A. country music television show broadcast in Compton, California during the late ’50s. Marion was someone she did not want to be lost in the more familiar influences she named during the interview.

Working for the Troubadour has also given me the gift of being able to hear so many of San Diego’s great local talent first hand. I remember the first Adams Avenue Roots Festival in April of 2008. It was amazing to me that a city would actually allow their streets to be closed off for a promenade devoted to music for two days. Something that’s never happened around my home in Los Angeles. That’s when I first heard Ross Altman sing “Midnight Special.” It’s also the first time I heard Gregory Page who seemed to be from England by way of Piedmont, Bluestown U.S.A. Robin Henkel played his goodtime blues and got up out of his chair like a Pentecostal preacher caught by the Holy Spirit trying to spread music smiles throughout the crowd. Chris Clarke and Plow, that weekend, sang songs that sounded a hundred years old, which could have been migrated by way of his native West Virginia. I was fortunate enough to hear Steve White at a song circle playing rhythm on his box and sounding out his rasping beat poet colored lyrics out like a local Tom Waits. The weekend finished with a few sets by Chris Hillman, Herb Pedersen and Chris’ first band, the Scottsville Squirrel Barkers, which also included Bernie Leadon formerly of the Eagles, and original members, Ed Douglas, Kenny Wertz, and Larry Murray.

Then, there was February, 2009 when Liz, Kent, and I went to Point Loma to see the Richie Furay Band at writer’s symposium. We sat font-row center with fellow writer, Steve Thorn, while Richie and his band brought his past legacy with Buffalo Springfield, Poco, and Souther, Hillman and Furay into the present with passion and energy. It was a stunning and celebrative performance by Richie and his entire band. I’d call it inspired. We didn’t know it at the time, but Richie had just been told that his old friend and band mate from the Springfield, drummer, Dewey Martin, had just passed away a few days before.

Finally, I can honestly say, one of the greatest discoveries I owe to Liz and Kent is Antonio Carlo Jobim, Joao Gilberto, and the roots of South American, Bossa Nova. I took an oddball assignment, at least for me, to write an article about the Brazilian songwriters and jazz icons for an upcoming spring tribute concert. Although, I’ve been eclectic in my tastes and knowledge most of my life, these guys somehow got passed me. Now, when I hear references to Jobim from Jazz enthusiasts, I have first-hand knowledge of how a genre of music was created way south of the U.S.A. back in the early ’60s.

I’m still sitting at my computer. It’s 5am. Sleep never came to visit. I’m still listening to the late, great Warren Zevon’s The Wind. I’ve listened to the album three times through as I’ve written this. Warren wrote it when he knew his life, as he knew it, would soon come to an end. It’s a reminder of how precious we really are to each other. The music connects us, but the muse, the poet, the musician’s flare and craftsmanship, all lead us to deepen the moments and our connections to each other. As the final song, “Keep Me In Your Heart,” reminds me of mortality, the passing moments, those who have gone and those of us who remain and all we can do in the end is with faith and hope embrace and appreciate our time here. If anything, this work has given me that insight. How important it is to be able to put down in words, well, hell…like Elton John says, “how wonderful life is while you’re in the world?” That goes for you, San Diego Troubadour, and those word embrace all of the talented writers, musicians, advertisers, merchants and most especially dear, dear Liz and Kent for keeping the flame of this music burning for this last decade, even when it would have been easy to let it go. They both held on to each other and to us and the world is a better place for it. Thank you, Liz and Kent.

The Creole Choir of Cuba: A Glimpse into the Folk Tradition of Afro-Carribean Music