This month we talk to four SDMA nominees about the upcoming event and pose five questions to Donna Larsen
SAN DIEGO MUSIC AWARDS / 30TH ANNIVERSARY
Voting is now taking place for the 30th Annual San Diego Music Awards! Anyone from anywhere can vote for their favorites once a day, across over a dozen categories. The celebration is likewise open to the public, taking place on August 24 at Humphrey’s, with all proceeds going to the San Diego Music Foundation to help keep music in San Diego City Schools. It’s the local music community’s biggest event of the year. Performers set for this year include Cindy Lee Berryhill, Marujah, Electric Mud, Brisa Lauren, Ed Kornhauser, Chickenbone Slim, and the Frets. We spoke to a trio of nominees about the event. 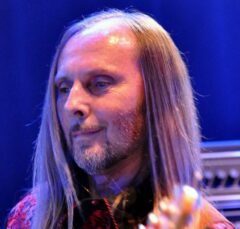 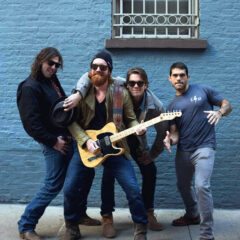 “I had to pinch myself to believe I had really been nominated, said Dave Preston (Best American or Country Album). “It’s such an honor to be invited to the dance, man. I am thrilled to just be a part of it all.” For him, the reward is in the event. “Shoot, again, just being part of the thing is an award in and of itself,” he continued. “I guess for me the best thing, and what I’m looking forward to the most, is hanging out with all the people I know and respect. We all work so hard at this thing we do, making music, and to have such a respected entity like the SDMA take notice and give a pat on the back truly makes a difference. And I love the fact that the proceeds of the event give back to the community and help fund music education in San Diego.”
Electric Mud (Best Rock Album and Album of the Year) has the distinction of actually performing at this year’s ceremony. “What we’re looking forward to most is definitely playing live to an audience on the night of the awards,” said guitarist Marc Hansen. “It’s been almost two years! Beyond that, it’s amazing to be nominated especially for album of the year as making great albums is probably our biggest goal. We haven’t had a chance to make a plan yet for the night—we’re all still just pumped to be a part of the 2021 SDMAs!”
Enter the Blue Sky (Best Americana or Country Album) is just as thrilled to be involved with the proceedings. “We had high hopes for this album and to be nominated is such a big deal; it’s a bit surreal,” said guitarist Sande Lollis. “Everyone puts in their best and we’re pretty darn proud of it. Still, there are so many talented artists in San Diego, and to find ourselves ranked up there with the rest is both humbling and affirming. It really is such an honor.” Her bandmate Tina Dee concurs. “For me it feels awesome because I was a guest vocalist at that point but now that I’m fully part of the group, I’m just excited!”
It’s Wayne Riker’s (Best Blues Album / 2017 SDMA Lifetime Achievement Award) eleventh time being nominated. “Much credit goes to the composite total of 79 local musicians that I’ve asked to join me over the past 11 years, with a special tip of the cap to the exceptional recording crew at Studio West,” he said. As with most of the musicians, the award itself is special, but the chance to interact with peers once more is the biggest attraction. “It will be refreshing to mingle once again amid fellow musicians after the past year and a half of uncertainty,” Riker said. “It should give us all a deeper appreciation of not only performing music, but a new perspective on our interactions on a human level.”
www.sandiegomusicawards.com
FIVE QUESTIONS FOR DONNA LARSEN 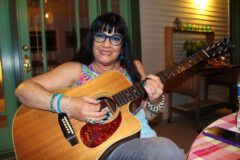 Walk In A.R.T. takes place every first Thursday in Hillcrest’s Mural Alley, on University Avenue, between 4th and 5th Avenue. Singer-songwriter Donna Larsen is up first on June 3, with a set at 7:15 p.m. Larsen has recently been in the studio with noted producer Josquin Des Pres, working on her sophomore album for release later this year. In the meantime, we ask five questions of Donna Larsen.
Who inspired you to play music?
My Grandfather was an opera singer. He also played every stringed instrument you could put in his hands, and accordion, too. I just have always really loved music, so I suppose it’s just a natural thing for me. Joni Mitchell and her music captivated me, and I wanted to play like her. I still wish I could! Thank God I have Randy Hodge to play lead guitar for my band, Messengers
How old were you when you gave your first performance? What song did you play and how was it received?
After being in theater in middle school, high school, and college, at 19, I played for tips for the first time at a tourist stop in Old Town. It was so exciting just to make a few bucks! They used to have these “Easy Made for Guitar” books, so I bought a few of those and went to town singing Joni Mitchell, the Eagles, and Linda Ronstadt—anything with three simple chords.
How would you describe your music?
That’s the million-dollar question! “Different” is what most people say. I like to let genres flow in and out, and I confess that I don’t like following the rules so much. I mean, I know what they are, but kind of throw them out the window when I’m writing. I’m just trying to capture what I hear in my head. It’s fun to experiment with different chord voicings, which drives my band crazy. We have a lot of discussions regarding the names of chords and how many times we change keys. I’ve been told a few times by other people, “You can’t do that,” but I know if I hear it in my head that it is indeed possible. There’s even a song we play called “And So What If I’m Wrong” that’s about that situation. Another song we have on our CD is “Every Song Is a Miracle,” which describes how music can go on its own limitless journey of freedom, transformation, and expression. 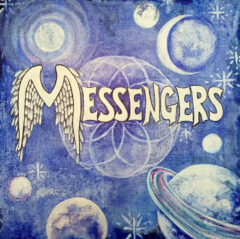 What music have you released?
Our 12-song Messengers premier CD. I’m so proud of what everyone did on it. Josquin Des Pres at Track Star Studios produced it and it was so positive, I never once uttered the word “can’t.” It felt like he really shared my vision. Ian Sutton was lovely to work with on mixing and mastering. It was a beautiful experience all around. Track Star also recorded some of the cuts, and mixed and mastered the children’s CD for my picture sing-along songbook, In My Own Backyard. It’s all family friendly music.
What’s the best thing that’s happened to you through music?
There have been some amazing experiences that I feel so fortunate to have experienced. There is one that stands out, though. My husband and my then five-year-old child and I traveled to Kazakhstan to adopt our daughter, Vika. She was almost three and was living in what they termed a “Baby House.” We would call them orphanages here. My daughter turned three while we were there, and we wanted to give all the kids a party—an American birthday party—for Vika. Of course, by the time that day came they had informed us that they would do the traditional dances, eat the traditional food, play the traditional games, wear the traditional native costumes, and sing the traditional songs! But, we were able to give the kids a concert! It was just so amazing to see all these kids listening to the music from In My Own Backyard, my children’s music. They were dancing and smiling—so joyful! It’s a beautiful memory. I also loved opening for the Beach Boys with the Revels. I think that was way back in 1987. It’s hard to say what is best. It’s pretty cool being a musician.
www.donnalarsenmusic.com
Donna Larsen’s children’s picture sing-along songbook, In My Own Backyard, is available at: www.IMOBYforKids.com