This month we have a Q&A with Monica Sorenson of Sometimes Julie, offer up some details on the 2021 San Diego Music Awards and review new musical offerings from The Armoires, The Beat Farmers and John Lennon’s Plastic Ono Band.
FIVE QUESTIONS FOR MONICA SORENSON OF SOMETIMES JULIE

Indie rockers Sometimes Julie’s fourth album, Where Are You? was recently released (reviewed in this issue), with a mix of rock and a touch of Americana, highlighted by radio-friendly songwriting and the vocal interplay of Monica Sorenson and guitarist Rick Walker. This month we check in with Monica Sorenson about the new album.
What’s the best thing that’s happened to you through music?
I have gained a wonderful circle of friends that has developed through writing, performing, and supporting other musicians— people who I likely wouldn’t have met had I not been involved in music. Some very talented people appear on Where Are You? as guest musicians, and they are all super cool. Being able to connect with—and support—creative people who share my passion for music is truly extraordinary.
What’s your favorite thing about being a musician?
Writing and singing… I realize I just cheated and named two things. I sit down to write and play every day. It is a compulsion really. I identify most as a songwriter—this whole Sometimes Julie journey began for me as a songwriting project, and writing it is how I spend most of my musical time. Yet, singing is practically like breathing for me. I have to sing. Sometimes I sing without even realizing I’m doing it. I sing all day long—my own songs, other people’s songs, or just the words and melodies that tend to pop into my head seemingly out of nowhere.
What do you listen to for fun?
I listen to a lot of music, and I try to find something new that I love every day. I listen to a variety of genres. Today it was “current indie,” but tomorrow it could be ’70s soul music. But whatever type of music it is, I almost always choose to listen to songs I can sing.
Which studio was your new album, Where Are You? recorded at?
We recorded the initial tracks for Where Are You? as a band at Pacific Beat Recording in Pacific Beach. Alan Sanderson, the studio’s owner and engineer, is a seasoned professional with a very impressive resume, and walking into his studio for the first time would be intimidating if it weren’t for Alan’s playful, laid-back demeanor. He puts everyone immediately at ease. Pacific Beat’s slogan is “it’s all about the vibe.” Alan creates a vibe where everyone is relaxed and can focus on being creative, having fun, and giving their best performances. And when you add Alan’s experience and engineering expertise into the mix, you have something really special. I honestly believe that Where Are You? wouldn’t be nearly as good if it had been tracked in another studio, and at this point Sometimes Julie would be hard-pressed to consider recording anywhere other than Pacific Beat. We are true believers.
What sets Where Are You? apart from your previous releases?
There is a lot of talent and musical expertise in Sometimes Julie, and we all love playing music together, which I think comes through loud and clear on Where Are You?. Most of our current lineup—Rick Walker, Bruce Paul Allen, Alberto Moreno, Anthony Sarain, and I—have been together for more than five years. The only exception is our awesome new drummer, Dave Fuller, who has stepped in seamlessly and been a great fit. At this point, we all know each other’s musical abilities and tendencies inside and out, so we zig and we zag together as a single unit. Probably most important, we know who we are as a band, and, while we love to dip our toes into several musical genres, we have now developed what is clearly the “Sometimes Julie” sound. No matter which song you listen to on Where Are You?, you know it is Sometimes Julie.
www.sometimesjulie.com

Nominees for the 30th Annual San Diego Music Awards will be announced on May 2, with online voting open to any music fan worldwide. The celebration itself will take place on August 24 (7 p.m.) at Humphrey’s Concerts by the Bay, with performers and details on tickets TBA. In the meantime, 30 years of clips from the event can be found on the San Diego Music Awards Youtube channel, including live performances from the Beat Farmers, Jason Mraz, the Paladins, Jewel, Candye Kane, Peter Sprague, Rocket from the Crypt, the Scottsville Squirrel Barkers, Charles McPherson, P.O.D., Big Mountain, the Schizophonics, Karl Denson’s Tiny Universe, and many more!
www.sandiegomusicawards.com
www.youtube.com/user/slammsd1
REVIEWS
The Armoires: Incognito (Big Stir Records) 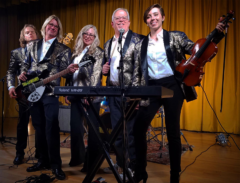 The basics: 15-track (plus three hidden) power-pop disc featuring songs released as singles under pseudonyms over the last six months by the Armoires, aka Big Stir head honchos, Rex Broome (vocals/guitar) and Christina Bulbenko (vocals/keys), alongside bandmates Larysa Bulbenko (viola, violin, backing vocals), Clifford Ulrich (bass, backing vocals), and John Borack (drums).
For Incognito, the Armoires are joined by an all-star group of friends including Khoi Huynh and Karla Kane of the Corner Laughers, labelmates Chris Church and Dolph Chaney and Karen Basset of the Rebel Pebbles / Pandoras. Produced and engineered by Broome; behind the mixing board you’ll find Michael Simmons (Popdudes), Joel Valder (the Shambles) and more.
Built around Broome and Bulbenko’s harmonies, the first thing that’s clear is that the band has impeccable taste in cover material, starting strong with opener “Paris 1919,” originally by John Cale, and including gems such as XTC’s “Senses Working Overtime” and 2020’s “The Night I Heard A Scream.” The originals hold their own in good company. Jangly “(Just Can’t See) The Attraction” is a wonderful, cloudy day listen, the violin melody adding just the right tough of folk to the melody.
Much of Incognito is mid-tempo, but there is some solid rock included, such as garage rocker “Walking Distance,” which reminds me a bit of the Dandy Warhols. Extra points as well for titles such as bluesy minor key rocker “Awkward City Limits” and harmony driven rocker “I Say We Take Off and Nuke the Site from Orbit.”
It’s hard to pick a single on an album made of singles, but the one-two punch of “Paris 1919” / “(Just Can’t See) The Attraction,” track one and two on this disc, is a terrific place to start. All the Armoires’ albums are recommended for powerpop fans, but novices would do well to start the collection here. Longtime fans already know they need this.
www.bigstirrecords.com
The Beat Farmers: Tales of the New West Deluxe (Blixa Sound) 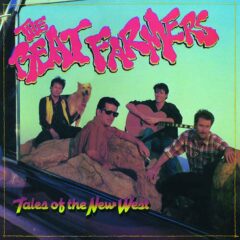 The Basics: an essential 12-song disc released circa 1985 now reissued with a second disc, Live at the Spring Valley Inn 1983, featuring an additional 21 tracks. The roots rock debut album that started the legend. Country and punk hybrid. Or just plain good ol’ rock ‘n’ roll. Any way you slice it, the original 12 songs still kick, from the opening blast of classic single “Bigger Stones” to the closing notes of iconic sing-a-long, Dr. Demento-approved “Happy Boy.” The deluxe part of the new collection is the band in their prime, with a killer live set that includes covers of tunes by Johnny Cash, Willie Dixon, and Bruce Springsteen. Well recorded and paced, it clearly captures the band’s magic, with guitarist Jerry Raney in full flight.
As great as all the music is, I give extra bonus points for the 24-page booklet, which is full of flyers, articles and other memorabilia, as well as excellent liner notes from Dan Perloff, the man who brought the band to national attention. if you are a fan, it’s worth the price of admission alone. This welcome reissue is the perfect introduction to a band that deserved far more acclaim than they received at the time.
www.amazon.com/Tales-West-Deluxe-Beat-Farmers/dp/B08SZ1F5D7
John Lennon: John Lennon/Plastic Ono Band: The Ultimate Collection 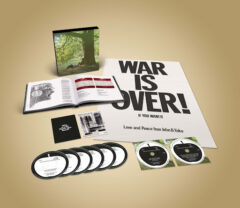 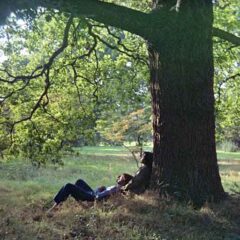 The basics: six CDs, two Blu-ray HD discs, a hard-back book, and memorabilia from 1970s-era John Lennon, with 159 tracks, including demos, outtakes, new mixes, and jam sessions. Absolutely essential for any Lennon or Beatles fan, with the bonus that many of the promotional tracks for the album, released to date, have new videos that feature rare and previously unseen footage. Notably, that includes “Look at Me”, which includes wonderful footage of Lennon at his Kenwood home on June 9, 1968, taken during the creation of “Film No. 5” (‘Smile’) and a crystal clear “Instant Karma” from BBC-TV’s Top of the Pops (February 11, 1970) in an alternate version to the one released for his Ultimate Collection comp in 2016.
The original Plastic Ono Band album itself remains a riveting listen. It’s a testament to Lennon’s songwriting prowess at this point that the original 11 tracks are so well known, despite there being no hit singles. Yet songs like “Working Class Hero,” “Love,” and even “Mother” are now classics in their own right, the latter two have even been covered by the likes of Barbara Streisand. A nice extra here is that the album now includes three at-the-time non-LP singles from the same time frame, “Give Peace A Chance,” “Cold Turkey,” and “Instant Karma.”
The remaining discs each recast the same 14 songs in the same order, but with the album now in all demo or outtake or new mix incarnations. For fans, it’s pure gold, with plenty of gems and aural revelations amongst the tracks. Meanwhile, by arranging the songs thusly, it theoretically makes each a more appealing listen to the more casual music aficionado.
The exception to the above track listing setting is disc seven, The Jams. Likely the first disc many who acquire this box set will play, its 22 tracks are a collection of off the cuff musical moments captured while warming up and in between songs. As such, many of the recordings here are brief and unrehearsed, but they are still wonderful “fly-on-the-wall” moments, with romps through “Honey Don’t,” “Mystery Train,” “Matchbox,” “Johnny B. Goode” amongst the treasure to be found.
Bottom line: This release is aimed squarely at the collector / die hard fan and it’s a home run, from packaging to music.
www.johnlennon.lnk.to/PlasticOnoBand2021

Questions for the Spice Pistols/CD Reviews