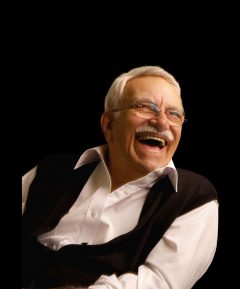 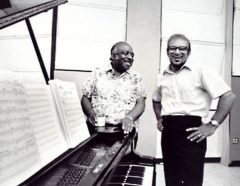 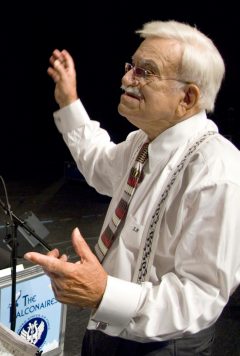 Sammy Nestico wasn’t just a star when he moved to San Diego County in 2000—he was the very definition of a legend. His greatest fame came as staff arranger for the Count Basie Band from 1966 on, filling the shoes of predecessors like Neal Hefti, Thad Jones, and Quincy Jones. Work with Sinatra and Sarah Vaughan followed in the late 1970s. But even before the Basie gig, he was already well known in big band and jazz circles for his stints with the top Army, Air Force, and then Marine Corps service bands.

He has recently retired from public events at age 96, turning 97 this coming February.

Picking up the trombone as a kid growing up in Pittsburgh, Sammy enlisted in the Army at age 18 (1942) and did a three-year hitch playing in an Army band.

After the war, he returned home, and was hired by Charlie Barnet. After only a few months, though, he enrolled at Duquesne University, graduating in 1950 with a degree in music education. After a year teaching, he re-enrolled in the service—this time in the Air Force, where he spent a decade in the Airmen of Note (originally founded by Glenn Miller in World War II as the Army Air Corps dance band). After he became musical director of the Airmen of Note, the Marine Corps took notice—and he was soon leading the United States Marine Band. Known as “The President’s Own,” this military band was and is assigned to the White House, where Nestico was soon arranging shows for Presidents Kennedy and Johnson. (The number of Air Force personnel the Marines have ever coveted is likely limited to Nestico, the recently deceased Chuck Yeager, and maybe Eddie Rickenbacker.)

After the war, he connected with family relation Sal Nistico, who was then playing in the Basie band. One thing led to another, and Sammy Nestico went on to arrange music for 10 albums with Basie, along with innumerable songs used in concert but not recorded.

His impact on San Diego predated his relocation.

Trumpeter and cornetist Bruce Cameron, who led one of the most popular jazz outfits in San Diego in the early 1980s, recalled first playing Nestico charts when Uncle Sam brought him to San Diego in one of the Navy show bands.

“I was in the Navy West Coast Show Band with a lot of people who are still active around town. Our repertoire included a whole bunch of Sammy’s charts, which we played very often. There were lots of them floating around in various bands I played with. He was so prolific, he wrote so much stuff. When I was at the Navy School of Music, I’m pretty confident we were playing some of his charts as well in the school band.

“There were a lot of other great arrangers, like Neal Hefti, who were busy at that time. But the thing about Sammy’s charts is they kind of played themselves. Good musicians could look at those things and kind of sing them in their heads without even doing anything with their instruments. [The charts] were so logical. Some arrangers would have seven bars on one line and nine on the next. His stuff was just laid down so perfectly, it was effortless. They just made sense. It was really remarkable how good he was—and how much the musicians appreciated it. Sometimes they were a little bit challenging, but most of the time you could just hand those out and it would sound perfect the first time through. We always enjoyed playing his stuff.”

After Cameron left the Bruce Cameron-Hollis Gentry Jazz Ensemble (which would rename itself Fattburger), he put together a new band that found steady work weekends at the Coyote Grill in Carlsbad. Cameron recalled that he’d see Nestico—whom he knew from having played earlier in the Coastal Communities Concert Band when Nestico was conducting and arranging—in the crowd at the Coyote.

“When we started playing up there, he wrote some charts for my bands. He came in a few times, and he was really fun to talk to and very enthusiastic. He obviously liked my band a lot—and there were a lot of other great bands there, like Hollis and Peter Sprague. He wrote three or four charts for us, which was quite an honor.”

In February of 2014, ahead of a 90th birthday tribute show by the Coastal Communities Jazz Band, Gary Adcock,  trombonist for the band, told the San Diego Union-Tribune: “Sammy Nestico is probably the most well-known big band arranger in the world. Whenever we play his arrangements, musicians just love him. His arrangements lay down right. Some things you play are herky-jerky but his are always smooth and they sound right.”

Ira B. Liss, who has led the Big Band Jazz Machine in Escondido and San Diego for the last 40 years, says he first met Nestico about 35 years ago.

“Of course, everyone knows who he is. I probably have everything he’s ever written for big band, because I have a library that exceeds 20,000 arrangements now. A lot of people didn’t know he was here for a long time. He likes San Diego, I think, because it isn’t Los Angeles. It’s a little less frantic.

“He still wrote for many years after he retired here. He had all the years with Basie, then he had several bands that he called the Sammy Nestico Orchestra. He did some studio albums like that. Then he did some things in Germany, with German radio orchestras.

“He’s done it all. He was the arranger for Frank and did a lot of work for Frank later in Frank’s career. He did albums for Toni Tennille. She was an awesome big band singer.”

Jeannie Cheatham, who is only a few years younger than Nestico, said she never met him or worked with him—but was well aware of his work, particularly given that she and her late husband, Jimmy (who also played in an Army band in WWII), played a Kansas City-style swing that was similar to that of Count Basie.

“He had a quite a few that were hit songs for Basie. He wrote good for Basie—they fit pretty good!”

A documentary is in the works on Nestico’s life: Shadow Man: The Sammy Nestico Story is being produced by Diane Estelle Vicari. Learn more at www.sammynesticofilm.com.

Adrienne Nims Keeps on Keepin’ On