February 2023
Vol. 22, No. 5
Enrique Lopetegui: Snark, Slam, and Rocanrol by Catherine BarnesJanuary 2021
Jeff Beck: A Tribute by Ted BurkeJanuary 2021
Marcus Petronius Bashore: The Best Seat in the House by T.E. MattoxJanuary 2021
Pacific Wave: A Surfin’ Safari January 2021
The Winter Dance Party 1959: The Night the Music Lived by Terry RolandJanuary 2021
Back with a Bang! Java Joe's Reunion at San Diego Folk Heritage by J.T. MoringJanuary 2021
Book Review: The Philosophy of Modern Song by Bob Dylan by Ted BurkeJanuary 2021
Rick Nash: Bass Man in Demand by Wayne RikerJanuary 2021
Mod Revivalists the Trebels to Reunite for 40th Anniversary Show by Jim TrageserJanuary 2021
If Music Be the Food of Love, Play On: Dually Noted Pairs Fine Food and Fine Music by Paul HomiczJanuary 2021
Advertisements 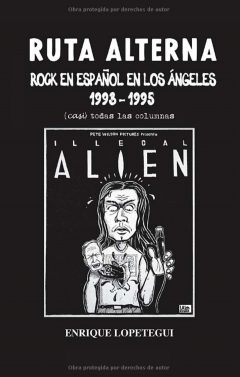 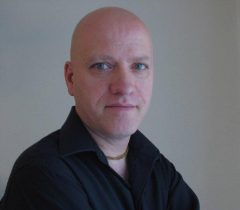 In 2012, I discovered Spanish-language rock, or “rock en español,” as I drove all over San Diego County with my radio tuned to 98.9. I loved the songs I heard, but since I couldn’t stop driving to Google the lyrics, I remained ignorant about band names, release dates, and song titles. Eight years later, music journalist Enrique Lopetegui published the book I wish I’d had back then: Ruta Alterna: Rock en Español en Los Ángeles (1993-1995), a collection of columns he wrote for Nuestro Tiempo (a now-defunct Spanish-language weekly published by the Los Angeles Times) during the peak of the rock en español movement in the city.

Forget Lester Bangs as the archetype of the eccentric music critic. Lopetegui could be the bald, blue-eyed Uruguayan Hare Krishna love child of Joan Rivers and “Ask a Mexican” (and indeed, Gustavo Arellano himself wrote a quote featured on the back cover, calling Lopetegui “a true rockero God” and “un uruguayo muy gallo,” or a brave, trouble-making Uruguayan). Whether he’s calling Maná fresas (preppy snobs), telling Los Olvidados to practice with a drum machine, or throwing shade to anyone who eats meat, Lopetegui can out-snark any Millennial journalist. At the same time, he writes with respect for the music; it’s worth learning to speak Spanish just to read his column predicting the importance of Café Tacuba’s second album Re, where he suggests that the band members can do any number of outlandish career-destroying moves typical of rock stars (such as taking a photo with the Pope and recording an EP of norteño-Gregorian chant fusion) as long as they keep making albums like that one.

But why Los Angeles? In his introduction to the book, producer, Golden Globe and two-time Academy Award-winning composer Gustavo Santaolalla writes that although the albums Lopetegui covers in this book originated throughout Latin America, many were recorded and mastered in Los Angeles. In addition, Lopetegui writes about Los Angeles-based rock en español bands such as Los Olvidados, María Fatal, and Voz D’Mano. The majority of the artists mentioned in the 386-page book come from Mexico (Maldita Vecindad, Maná, Caifanes, Café Tacuba, El Tri, Alejandra Guzmán…) or Argentina (Charly García, Los Fabulosos Cadillacs, Luis Alberto Spinetta, Fito Páez, Miguel Mateos…), but there are also Chileans (La Ley), a Colombian (vallenato pop-rocker Carlos Vives), and even a Cuban (from Cuba!), Carlos Varela. Of the Mexican bands, I most enjoyed Maldita Vecindad, especially “Morenaza,” a song about cat calls that predates the #MeToo movement by 17 years, and their frenetic cover of Juan Gabriel’s “Querida.” I enjoyed Lopetegui’s interviews with Rita Guerrero of the Mexican band Santa Sabina and Mexican Alejandra Guzmán, as well as their corresponding tracks on the Spotify playlist. However, if you only listen to one song on the playlist, make it Charly García and Pedro Aznar’s “Sólo Dios Sabe,” a haunting Spanish-language cover of Brian Wilson’s “God Only Knows.”

Reading Ruta Alterna, I felt nostalgic for the days of MTV and landline phones. “[We had] no Facebook, no YouTube, no Internet,” Tucupá Delgado, singer for Los Olvidados and a San Diego resident since 2007, told me over the phone. “If we [said], ‘Oh, Los Olvidados are playing, [lots of] people [would] show up like out of the blue in places with no security.”

Other themes in the book include difficulty getting clubs to book rock en español acts, security guards refusing to respect the slam dancing of rockeros, dealing with racist state laws like Proposition 187, and struggling to get rock en español songs on the radio.

The days of having an exclusive rocanrol radio station in San Diego have ended; turn your dial to 98.9, and you’ll now hear an unsatisfying mix of current Anglo and Latin indie rock. What would it take to start hearing rock en español on English-language stations like 91X? It appears they still have a request line.

“No, rock en español is dead,” some feckless DJ would say.

Yet, rocanrol is relevant enough for Argentine trap star WOS and Puerto Rican rapper Residente (formerly of Calle 13), who are among hundreds praising rock en español in the new Netflix series Rompan Todo, which chronicles 50 years of Spanish-language rock in Latin America. Whether or not rocanrol makes a comeback, Ruta Alterna at least made sure to document those glory days in L.A. for generations to come.

The Nontraditional Tradition of Gabriel Sundy