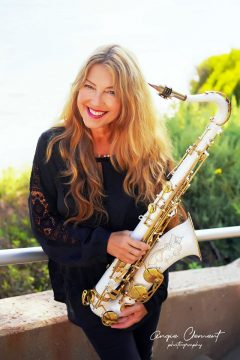 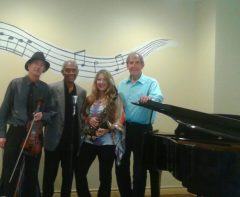 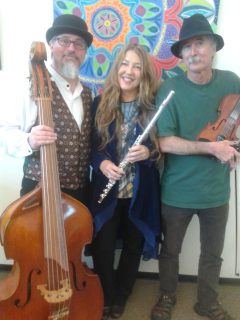 “No boundaries and no problems.” That is how Adrienne Nims sums up her life and her music. Whereas other musicians clearly and proudly define themselves as country performers, jazz artists, hip-hop creators, or musicians preserving the legacy of mediæval feminist composers, Nims confidently places herself outside the box of musical pigeonholing. “People want to categorize other people,” she says. “But I’m the one defining me. I’m not going to limit myself.”

I normally like to speak to the folks that we profile in the Troubadour personally, meeting over a cup of joe at a coffee shop that doesn’t have a mermaid hanging on its wall, but due to the restrictions that the coronavirus has placed on us all (more about this latter) Nims and I spent part of a recent morning on the phone.

As we talk, it becomes more and more apparent to me that Nims is not someone who is out to break down musical boundaries. Her reaction is more akin to, “Musical boundaries? What do you mean there are musical boundaries?” One minute we are talking about classical music, and the next Nims is waxing as to how much she loves Duke Ellington or Pat Metheny or Stevie Wonder. This ability to see and appreciate music beyond the boundaries that people have set for centuries is just not part of her world. “I just have a genuine love of music,” she says. “And there are so many types of music!”

Nims is one of the most versatile and successful musicians in San Diego. From the deck of the Star of India, to the Seafire Restaurant and Bar in Carlsbad, to a recurring gig at Encinitas’s Mr. Peabody’s Bar and Grill, the North County resident has performed all over San Diego County. She has opened for rock icons Joe Cocker and Steppenwolf as well as Spyro Gyra, Al Di Meola, Fourplay, and Boz Scaggs.

Many San Diegans, particularly folks in coastal North County where Nims bases herself, are familiar with Nims’s ensemble Spirit Wind, which plays a mix of jazz, Latin, and R&B. In true “I see no boundaries” fashion, the ensemble takes their influences from all over the world, what might be called a sort of world beat approach. Nims accentuates this eclecticism by performing not only on the traditional jazz wind instruments of the soprano, alto, and tenor saxophones, but also incorporating Native American, Indian, African, and Asian flutes into the band’s performances. Besides Nims, Spirit Wind includes the talents of keyboardist J.R. Betts, guitarist Jimmy Patton, and percussionist Warren Bryant.

Nims began serious study of music with classical training on the flute. While she was in high school, she began an association with the New England Conservatory of Music, the oldest independent music conservatory in the United States and one of the most prestigious in the world. Nims continues with her love of and performance of classical music today, performing classical concerts with pianists or cellists throughout San Diego County. She has preformed as part of pit orchestras in a number of local theater productions, working with such companies as Lamb’s Players and the Diversionary Theater.

Okay, so there is jazz, Latin, pop, musical theater, and classical. What else? Nims also performs with her Celtic ensemble. She plays the flute, but she is also one of the meanest pennywhistle players I’ve ever heard. Among the three CDs that she has recorded and released, one, Lady of the Loch, is devoted entirely Celtic music.

Nims has released a CD of music by Spirit Wind. Her other CD, Now and Zen, comprises new age compositions, or meditations, performed on Native American, Asian, and Indian flutes.

Nims grew up in the middle of the natural world, which has served to inspire much of her music. Her hometown of Barre, Massachusetts, population 5,400 (For reference, that’s about one seventh the capacity of our Petco Park in downtown San Diego.), is completely surrounded by forest. The town is the essence of bucolic, providing a quiet setting for the Hidden Barre Meditation Center and the Barre Center for Buddhist Studies, which has been teaching Buddhist practice for the last 30 years.

Nims grew up in an Italian community, leaving her with a lifelong love Italian music. (Did I mention that she also plays Italian music?) She remembers some of her first exposure to music at the Woods Memorial Library in her hometown. As a result of those early experiences, Nims makes sure to perform a great deal at our local libraries, the San Diego City branch libraries and the county libraries. She appreciates how inclusive the libraries are and that anyone, no matter an individual’s background or income, can attend. “And that concert at the library could be the first concert for someone else,” she says.

When I asked further about her love of music, Nims said, “I have a physical need to play.” I’ve heard it from other musicians. For them not to play music is akin to birds being unable to fly or kangaroos not being able to hop. Her influences on the saxophone include David Sanborn, Grover Washington, and Bradford Marsalis. Oh, and her grandfather, too, who also played the sax.

Besides her musical talents, Nims was blessed with natural good looks. She has long, blonde hair that flows past her shoulders, and when she’s not playing her horn or flute, she displays a confident smile.

After a concert or on a break during a gig at a café Nims often hears the same question from folks: “Did your parents make you practice a lot?” The listeners correctly assume that musical talent is earned after years of daily practice, with the musician spending hours and hours practicing his or her instrument.

The folks’ assumptions are correct for Nims, but only partly. Yes, she did spend hours and hours at the piano or with her flute or saxophone, but they are wrong about her being forced to practice. It’s something that she did gladly from a very early age. From the very beginning she loved music. Her love of music is so much a part of her that she cannot remember when she first fell in love with her lifelong passion. “People have commented on my playing, saying that I have a commanding technique,” Nims says. “They don’t realize I’ve spent so much work to get here.”

Nims is always finding new sources to learn from or to make music. “I’m never bored,” she says. “I find inspiration from other arts. For example, Paul Winter recorded animals, and he wound up with new compositions based on these recordings, on sounds based in nature. It is those kinds of things that inspire me.”

Nims came to San Diego as a new adventure. The change of geography gave the Ithaca College graduate new opportunities at collaborations and opportunities to perform at some of San Diego’s best music showcases, such as Humphrey’s and the Belly Up Tavern.

In our conversation the inevitable topic comes up: Covid-19. For many, the year 2020 has been compared to a dumpster fire. The pandemic has affected everyone. Grocery clerks work behind Plexiglas shields now. Restaurants are restricted to serving only takeout. Schools are open, then they are closed.

Among the hardest hit, professionally and financially, are musicians. A few weeks back, it seemed as though things might be opening up for musicians. I was able to make it to a few open street concerts, the bands playing outside, busking, with the audiences masked and keeping socially distanced.

But that has changed for the current lockdown. And the usually upbeat Nims confesses that things are rough for her. “People assume somehow that during the pandemic that all the musicians are somehow taken care of, but that’s far from the reality of the situation,” she says.

Despite the downturn in gigs, Nims is using this lockdown time to the best of her abilities. “I’m using this time to go through the creative process. I’m sure all musicians are doing that now,” she says. However soon the lockdown is unlocked and we can once again gather for musical performances or enjoy a band while we go out for dinner, Adrienne Nims will be playing music past the boundaries that others box themselves into and exploring new musical horizons. As she said, “No boundaries and no problems.”

The Romantic Harp Guitar: An Instrument Like No Other