January 2023
Vol. 22, No. 4
The Romantic Harp Guitar: An Instrument Like No Other by Derek ShawDecember 2020
Back with a Bang! Java Joe's Reunion at San Diego Folk Heritage by J.T. MoringDecember 2020
Book Review: The Philosophy of Modern Song by Bob Dylan by Ted BurkeDecember 2020
Rick Nash: Bass Man in Demand by Wayne RikerDecember 2020
Mod Revivalists the Trebels to Reunite for 40th Anniversary Show by Jim TrageserDecember 2020
If Music Be the Food of Love, Play On: Dually Noted Pairs Fine Food and Fine Music by Paul HomiczDecember 2020
Harold in the Land of Jazz by Bart MendozaDecember 2020
Sephardic Dance and Music by Yale StromDecember 2020
Loretta Lynn: A Special Tribute to the Queen of Honky Tonk by Terry Paul RolandDecember 2020
Ben Grace Gilmore: It's All About Building Community by Sandé LollisDecember 2020
Advertisements 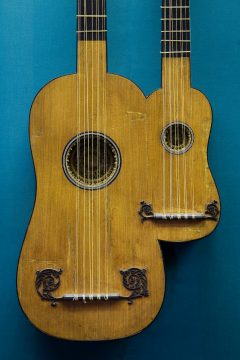 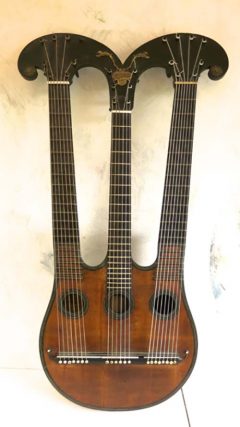 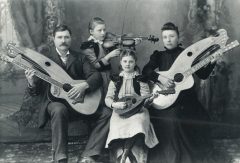 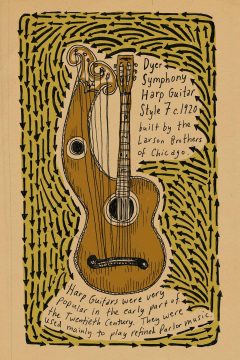 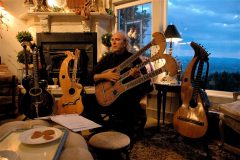 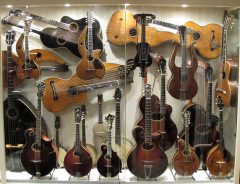 The Museum of Music in Carlsbad had a wonderful exhibit of harp guitars a while back.

This enchanting story begins in Europe during the romantic era when western civilization was on the rise, following the age of enlightenment. However, a movement away from those norms resulted in a period of intellectual and artistic rebellion. The turn of the nineteenth century saw legitimization of the individual imagination as a critical authority that allowed freedom from classical notions of art, instead stressing emotion as the source of aesthetic experience.

Society became spellbound by the folk music that resonated throughout this vibrant epoch. Metal strings allowed for greater amplification as the guitar was rediscovered and reformatted in the lyre, lute, and mandolin. These manifestations beautifully complemented the flamboyant virtuosity and lyrical melody of the romantic age, contributing distinctive sensory and tonal colorings to the dreamy music.

Roma gypsy music and Spanish flamenco emerged as the most popular styles of the mid- nineteenth century. France, Russia, Austria, and Italy went nuts for folk, securing the guitar’s mainstream popularization once and for all.

The harp guitar was the most outlandish of free-form instruments developed during that period of cultural awakening and inventive fortitude. An extended-range guitar, unfettered and unfretted, the harp guitar is an arena for boundless combinations of polyphonic notes, unconventional melodies, and complex chords.

The W.J. Dyer & Brothers and Larson Brothers companies licensed the production of the harp guitar and proliferated Knutsen’s models throughout the Midwest and Southern California. Gibson and the Jenkins Company later introduced harp guitars with jumbo bodies and sub-bass strings attached to a supplemental neck or extension.

These American instruments responded to a need for greater volume and diffusion of sound. The parlor era of acoustic guitars was forsaken with the rise of twentieth-century country western music as more performers pumped up the decibels.

The city-slick 1920s and 1930s introduced the world to big band, swing, jazz, and blues. The dawn of radio forever changed the face of music as loud electric sounds gained favor over understated traditional styles.

It wasn’t until the cultural upheaval of the 1960s when America was again ready to appreciate the subtle splendor of extended-range acoustic guitars. San Francisco was the hub of democracy and experimentation, shifting to an inner quest for spirituality, consciousness, and lucidity. Music defined identity, and the guitar became the revolution’s spokesman.

The modern resurgence of the harp guitar was spawned from the movement by ingenious artists who began looking for new ways to improve on old classics. The harp guitar was rediscovered and honed to meet the needs of contemporary music. The focus shifted away from synthetic styles and industrial development toward refined artisan expression, craftsmanship, and natural settings.

Harpguitars.net is an amazing website founded by renowned expert Gregg Miner. The popular domain provides the most comprehensive information about this rare instrument on the Internet. It’s supported by hundreds of voluntary subscribers, which keeps the website devoid of ads, banners, or pop-ups. And it’s all-access except for the interactive forum, which links harp guitar enthusiasts around the world.

“This instrument, unlike any other, embodies a free inventive spirit,” said Miner, collector and specialist on American harp guitars. “Due to the broken canons of instrument design, it lends itself to creative self-expression.”

Because of its inconsistent features and many names, the harp guitar thus lacks precise form from a musicological perspective and remains difficult to define from the point of organology (the science of musical instruments). It’s so uniquely diverse that a variety of artistic hybrids and related forms simply defy classification.

Stephen Bennett is a premiere musician and founder of the Harp Guitar Gathering. Showcasing an eclectic blend of traditional and contemporary styles, he presents original compositions as well as Beatles tunes and Dvorak arrangements. Inherited from his great grandfather, Bennett’s knack for precision and artistry is testament to decades devoted to the craft of harp guitar playing.

“I acquired my great grandfather’s 1909 harp guitar in 1988 after it had sat in a basement for 20 years following his death,” Bennett recalled. “As a solo guitarist, it took me less than five minutes to realize the enormous possibilities inherent in the instrument…the sounds that emanated from the beginning intrigued me, and I was aware that compositions were going to flow forth from it.”

On Saturday, March 24, Oregonian John Doan will perform 20-string portraits of sound, taking samples of everyone from John Fahey to Jimi Hendrix. With his playing, his audiences are taken on an international odyssey that traces the roots of harp guitar and reinvents its contemporary applications. Playing on a rare three-necked harpolyre, a predecessor of the harp guitar, Doan evokes a time when people used to dream without the help of film, television, and the Internet.

William Eaton, an accomplished luthier, is acknowledged as one of the world’s greatest designers of guitars, harp guitars, and stringed instruments. From quantum physics and string theory to the one-string shaman’s bow, Eaton has written scores for chamber orchestras and world fusion ensembles.

Adrienne Nims Keeps on Keepin’ On