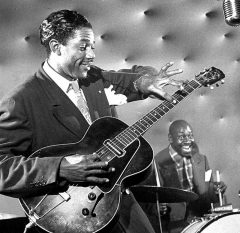 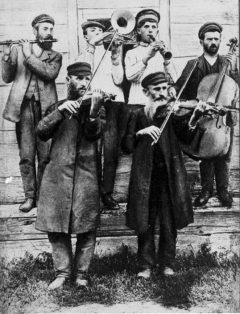 Like other workers, musicians had their own jargon. This professional argot provided a sense of camaraderie for jazz musicians. African-American jazz musicians called this jargon “jive talk” or “Harlem talk.” Some of the more famous practitioners and experts on this jargon were Cab Calloway, who published the first dictionary of jazz jargon called Cab Calloway’s Cat-ologue: A Hepster’s Dictionary in 1939 and Slim Gaillard’s Vout dictionary he compiled in the 1940s and ’50s. He called it Vout, which originates from a jazz slang word “voot,” meaning money. In this vein, the Jewish folk musicians of Eastern Europe (Klezmorim, Yiddish pl.) had their own argot. The word argot, by the way, is from the French langue des malfaiteurs—language of criminals. It differs from slang in the relative size of the group, which uses it, and is distinguished from a dialect, which is usually understood to have geographic rather than professional and chronological boundaries. An example of generational slang is that I grew up saying “that was bitchin’,” while my father’s generation said “that was cool,” and my daughter’s says “that was awesome.” A dialect, moreover, normally differs from the standard language in phonology and grammar as well as in vocabulary, while argots and slangs are typically made up of words and phrases that are not part of the standard language. Argot, slang, and dialects may influence one another and may affect the standard language as well. For example, the word “gig” went from African-American jazz musicians (to white jazz musicians) to mean any music job to everyday use as any kind of paid work.

The klezmorim often traveled far from their hometowns for gigs, stopping at inns or taverns to eat, drink, or sleep, so conversing in klezmer-loshn (literally klezmer—tongue) allowed them a certain privacy, particularly among other Jews or even gentiles who spoke Yiddish. When the klezmorim performed for non-Jews (who often became drunk, leading to fights among themselves and with the klezmorim), using klezmer-loshn provided a certain amount of security, particularly when they spoke about their employers and payment (usually in derogatory terms). For example, one klezmer told me, “Once when we were playing for the gentiles I remember hearing the leader of the band speak about the bride’s sister and how she had nice firm krelikes (breasts). He said sleeping with her would be great and that it would cost less than five dances. I really didn’t understand all that he had said, but I laughed with the rest of the musicians so I wouldn’t feel left out.” (Interview from Duvid Kagan from Bedzin, Poland)

Since weddings formed the backbone of most earnings, it is not surprising to find many words in klezmer-loshn about money, sex, and wedding guests but surprisingly few musical terms. “Indeed, the income of the musicians was largely dependent on the largesse of the wedding guests, who had to be encouraged to pay for tunes. This often required the machinations of the musicians.” (Robert Rothstein)

The following saying sums it up: Yeder vus tanst mit der kale varft arayn in tsimbl far di klezmer shabes. (Everyone who danced with the bride paid the cymbalist, because there was no dancing with her on the Sabbath.)

Being able to speak klezmer-loshn allowed one to be an insider in the world of the klezmer, accepted by one’s professional peers. This was similar to jazz musicians in America who created their own slang to be used among themselves. However, slang, unlike a professional argot, was less specific to one particular group and became known and used by the general public. Jazz slang also did not have the same depth in terms of a large vocabulary like klezmer-loshn. The following piece of conversation could have been heard almost anywhere during the bebop era of the 1950s. “Dig this, man. This cool cat really blew his ax and earned a bill for the gig.” (Translation: Understand this, man. This smooth musician really played his instrument and earned a hundred dollars for the job.)

Klezmer-loshn derives many of its words from the criminal’s argot, the most international language in Europe, incorporating words from many different languages, including Yiddish. Traveling the highways and byways of Eastern Europe (with stops at inns and taverns along the way) brought the klezmer into contact with the criminal element, which only reinforced the negative stereotype some Jews already had of the klezmorim. For example, take the following remark by philologist Avrom-Yistkhok Trivaks: “In the klezmer language we observe many words that in the first place are of sinners. It is a language only used by debauched males.” This observation is reinforced by the large number of obscene words in the vocabulary.

Another example of this negative connotation of a klezmer came from an informant Hannah Friedman, with whom I spoke 1983, and who at that time was 90 years old.

“When I was 12 I had a good friend, Nosn, who played the violin. When I used to tell my mother I was going to see my friend she would say, ‘Oy dos klezmer yungt.’ (Oh, this klezmer youth). Several years later I went and saw Toscanini conducting the NBC Radio Philharmonic, and who did I see sitting in the first violin section but my old friend Nosn, now known as Nathan Arkoti. When I got home and told my mother she replied, ‘A klezmer yungt nokh.’ (Still a klezmer youth).”

Here are some sayings about the klezmorim that indicate their low social status and the difficulties of the profession:

Dray mentshn oyf der velt zingen far tsures: a khazn, a betler, un a marshalik. (Three people in the world sing out of need: a cantor, a beggar, and a wedding bard.)

Khasene gehat mit a klezmer iz geveyn a khusn mit knap yikhes. (Marrying a klezmer is like a groom with hardly any pedigree.)

AND MY FAVORITE: Er hat a ton vi azoy men pisht oyf blekh. (He has a tone that sounds like a man pissing on tin.) 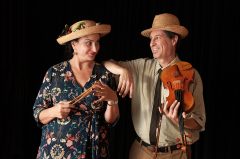 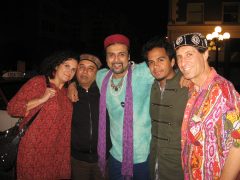 Yale and Elizabeth with members of Hot Pstromi.

Then there is the word for the klezmorim’s secret argot itself and that is labushinske. The word for klezmer is labushnik. By the way, to further indicate the rather low status of the klezmer reputation, a labeshnik is a cardplayer—the words are almost interchangeable for a reason. To “play music” in klezmer-loshn is labren, laben and labern, which also means to play cards. Most likely, this comes from the Russian labat, to play a musical instrument but not in a complimentary way, or the word labukh, which means musician but one who can only get a restaurant gig and nothing more prestigious. Perhaps these words originate from the German word labbern (to babble). This got me thinking about the word blab—to utter, to tell in thoughtless manner, to chatter, to prattle, loose chatter—gossip, all this from the Danish word blabbre. And a blabberer is from the Middle English word blaberen, to stammer; and in klezmer-loshn “to speak” is labern. All of this seems to mean that the klezmer referred to himself as one who was not a lofty player but one who just jabbered on the instrument. Many regarded klezmer as high-level but it seems the musicians themselves didn’t suffer from self-importance. In the last third of the 19th century, many klezmer musicians were advancing from the shtetls to conservatories and playing classical music, which offered better pay and social status. (David Oistrakh, for example, began his studies with a klezmer instructor).

The Yiddish philologists who researched the klezmer-loshn before 1930 found that younger klezmorim were already forgetting much of the vocabulary. (Not unlike young jazz musicians today who may only use a smattering of jazz slang.) Klezmer-loshn was an important part of klezmer lore in the shtetl, and found its way into literature and song, including the works of Yiddish writers such as Sholem Aleichem (in his novel Stempenyu), Mendl Mokher-Sforim (in his story “Fishker der Krumer”), Irme Druker (in his novel Klezmer), and songwriters such as Shloyme Prizament and Moyshe Broderson.

Come hear some klezmer argot along with songs and melodies from around the world that celebrate the winter solstice on December 21 at 7:30pm. To be sure, all these musicians have chops: Yale Strom, Elizabeth Schwartz, Mark Dresser, and Tim McNalley. The concert will live stream from the San Diego REP Theatre. Go to: sdrep.org to get the link to live stream.

The Romantic Harp Guitar: An Instrument Like No Other