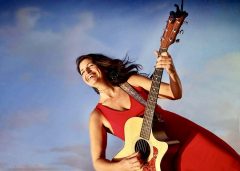 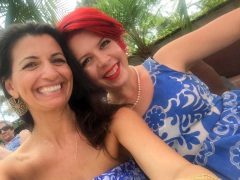 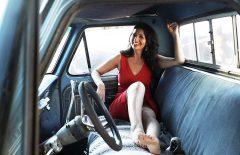 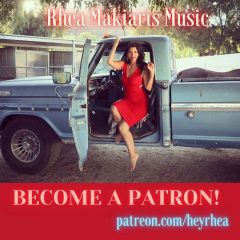 “I always wanted to do music. I wanted to spend as much time doing music as I could.” Rhea Makiaris is sitting cross-legged in a wicker chair outside her new digs in Lakeside, excited to find a new direction and a new commitment in her life. She is now a full-time musician. “Music brings joy to people, and I love to bring joy to people,” she says.

Wearing a loose magenta sweater and blue jeans, her black hair framing her Hollywood movie good looks, Makiaris described how recent events brought about her decision to embrace a life of music. It’s a bright Tuesday afternoon. We sit socially distanced in the shade of an old and gnarly peppertree. Chickens, really big chickens, scamper about in the dusty soil. The Santa Ana winds stir up leaves and make the tall eucalypti sway. There is an electric spark to the air.

Makiaris is a performer, one of the most talented singers in San Diego. She is used to delighting crowds with her renditions of oldies, pop standards, and selections from the great American Songbook. With Whitney Shay, San Diego’s award-winning singer, Makiaris performs as The Same Dames, an act that is high-energy, raucous, and joyful.

But for the lifelong San Diego resident music was always a hobby, a pastime to enjoy once she finished her work as an American Sign Language interpreter. Being a full-time musician seemed out of reach for her. “Ever since I was a little girl I thought it would be too hard to make a living at making music,” she says.

Back in March all of Makiaris’s work as an American Sign Language interpreter had dried up to zero. Her gigs were cancelled, too. Like so many Americans, so many folks across the globe, she was left unemployed because of the novel coronavirus pandemic.

There was much that seemed to be going right for her. She was living in a beautiful house in Kensington, with a beautiful grand piano. Makiaris still had family and friends. “But I was feeling hopeless. I found myself feeling trapped,” she says. “Everyone went through it. I’m used to being around loved ones, going to the park. And all the news that you heard everyday about the virus, it was scary.

“I was stuck. I was unemployed. I needed a purpose.”

But Makiaris was stuck for only so long. She inaugurated Makiaris Music Mondays, hour-length home concerts live streamed on Facebook. Originally conceived as a way to maintain her connections to family, friends, and fans, the response has been overwhelming. As with all the live stream concerts, Makiaris had Paypal and other cyberspace tip jars. She says that viewers have been very generous. With the money that she made from her Music Mondays, “I was able to pay my rent!”

I was lucky enough to catch one of the Makiaris Music Mondays soon after they began. It was delightful. While some of the excitement of a live performance was lost—there were no cues of shared excitement or laughter, and there wasn’t the communal feeling of sharing in applause with others—there was more intimacy, with Makiaris sitting just a few feet from the camera. It was also sweet to watch Makiaris as she checked out the names of the folks who had dropped in on the streaming and said her hellos.

Besides the Music Mondays, Makiaris also realized that, despite the beautiful surroundings of Kensington and having a grand piano, her living situation was not conducive to weathering a pandemic. She pulled up stakes and moved to Lakeside, where she could experience the outdoors and an almost country lifestyle.

A big factor in Makiaris making this decision was her discovery of Patreon, an online subscription service that allows musicians and other creative individuals to actually get paid for creating online content. We’ve all heard about the YouTube stars who are making the big bucks with the video supersite. But those folks comprise just a small number of folks who create content on Youtube. Most performers—even the ones whose videos get tens of thousands of views—don’t really make money off of YouTube. As a subscription service, Patreon gets dollars into the pockets of the artists who use their service, even if that artist is a local performer with a local fan base. “Patreon lets you build an audience. You make songs and get paid,” Makiaris says. “And anyone can do it. Fans want to support you. Like a lot of people, I’ve had trouble with self-promotion. Patreon is cool. Right from the start I had 200 to 500 viewers.”

She has recently started to include some of San Diego’s finest talents in the Makiaris Music Mondays, including Whitney Shay and music Renaissance man Simeon Flick. “I adore collaborating with other people and want to do more of it,” Makiaris says. So far, the collaborations have been in-person, Makiaris and her guest sharing the performance space, but she is open to collaborating online as well.

Though she has shown a great deal of sophistication when she puts together her music videos, Makiaris is now doing the post production on her recordings, all the button pushing and knob twisting that is done in the music studio; she has found that she enjoys it tremendously. “I love it. I get so into it I get lost. It’s a different way to be creative,” she says.

Acts aren’t booked yet, as a matter of fact things are still in the preplanning stages, but Makiaris, as part of her online performances, is interested in reviving the old variety shows of yesteryear, ones like the old Ed Sullivan Show. Perhaps she may make show business history, as she utters a phrase as earthshaking as “Ladies and gentlemen, the Beatles!” or maybe even introduce Petrushka, the Dancing Bear.

“There’s this internal dialogue that we have with ourselves, and just a few months ago this inner dialogue was telling me to be scared, to not try anything new, but I knew at the time that what I was hearing wasn’t real,” Makiaris says, “It’s important how you react in the face of adversity.” She leans back in the wicker chair and smiles. “I took action.”