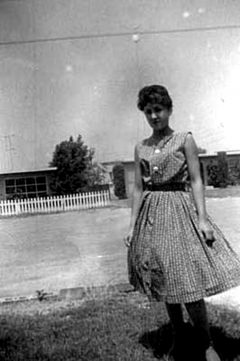 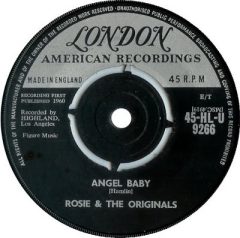 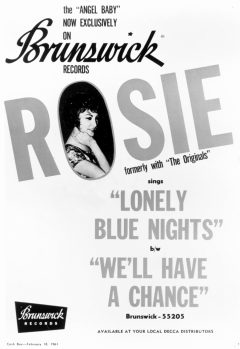 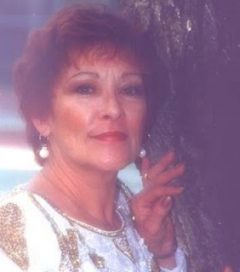 Rosie in her later years. 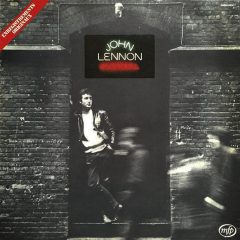 The majority of rock historians agree that rock ‘n’ roll hit a dry spell between 1960 and 1962. The charts told the story: leather-clad rockers were out, acne-free boys and girls were in. There are several key reasons why the music retreated from the intensity of Little Richard to the conservatism of Connie Francis—the deaths of Buddy Holly, Eddie Cochran, and Ritchie Valens; Chuck Berry’s bitter court trial; the payola scandal; and last but not least, Elvis Presley’s military obligation. These events provide an insight into why the record charts of the early 1960s were being represented by such major “rock” personalities as Lawrence Welk, Steve Lawrence, and Anita Bryant. Artists like Roy Orbison, Ricky Nelson, and Gary “U.S.” Bonds did their best to keep the rock ‘n’ roll torch lit, their singles being a welcome relief from all the “safe” music that was pushed down listeners throats.

However, safe, soft romantic ballads were huge, and one of them, the oldies-low rider classic “Angel Baby” by National City’s Rosie and the Originals, was the perfect, albeit lo-fi, example of this. The song, which reached number four in the national charts, would be Rosie and the Originals’ only hit. Their story is worth telling, for it is a prime example of the music industry’s most common casualty: the one-hit wonder.

Like another famous female singer connected to San Diego to follow some 34 years later, Rosie Hamlin spent part of her childhood in Anchorage, Alaska, although she was born in Oregon. Her family eventually settled in National City, and she attended a number of area schools, including Mission Bay High. Her family was very musical and by the age of 13 the performing bug had bitten. Borrowing her sister’s makeup in an attempt to look older, she auditioned for and joined a country band while performing for family functions alongside a group of cousins. In 1960 she discovered a love for the piano, which led to a family friend helping her begin her musical career by introducing her to fledging group—the Originals—David Ponci as well as Noah Tafolla on guitar and Tony Gomez on bass. Later on Carl Von Goodat (drums) and Alfred Barrett (sax) were added to round out the sound.

The group made a local recording  “Kinda Makes You Wonder/My One and Only Love” with the help of another National City-based group—the Cascades—on the flip side, and at the age of 14 Rosie wrote the song that would make her a staple of oldies radio: “Angel Baby.” The song was representative of the type of music that was being played on the radio in 1961. Syrupy sentimentality was selling big, but at this point the group was still unsigned.

In late 1960 the group headed to an old airplane hanger, located in San Marcos, which was being used as a two-track recording studio, and taped the song. Sadly, the group’s saxophone player’s mother wouldn’t let him attend the session because he had to do yard work, so Tony improvised the sax. Amazingly, the group didn’t have a song prepared for a flip side, so they improvised a tune and had a friend, the wonderfully monikered Bluefurd Wade, ad lib lyrics. The song became “Give Me Love.”

John Lennon, quoted in Rolling Stone (11/23/68), said about the song, “It’s an amazing record. It’s one of the greatest strange records, it’s all just out of beat and everybody misses it—they knocked off the B side in ten minutes. I talk Yoko’s leg off telling her this is it, this is what it’s all about!” He would go on to tell Life magazine in a 1969 interview that Rosie was his favorite female singer. Meantime, since the group had a difficult time finding a label, they took a copy of their disc to the local Kresges, and when it was played in the store kids loved it! In a scene right out of a movie, a label rep happened to be in the store and, without a contract, the group handed over its master tape. This would prove problematic in the ensuing  years, but “Angel Baby” became a certified smash in 1961, racking seven weeks in the national top 10. It was even released in the UK on London Records. Amazingly, when the master tape of the single was requested by their British label, the wrong master (an alternate take) recording was sent, so the two singles are different. To date most comps have used the British master, making the original hit and San Diego version of the song the rarer of the two. Collectors will also want to search out a Canadian release on the Zirkon label.

The height of fame found the group opening for the Rolling Stones on their first visit to San Diego, major airplay, and more, but this would be the band’s peak.  Rosie and Noah soon went to New York City to open for Jackie Wilson at the Paramount, to perform six shows a day, with session players rounding out their sound. And she signed to Brunswick.

In March 1961 Rosie made a record for the Brunswick label after impressing Wilson. The A side was titled “Lonely Blue Nights” and despite an appearance on American Bandstand in February 1961, it unfortunately didn’t come close to achieving the success of “Angel Baby.” Another aspect of the Brunswick contract stipulated that she would be managed by Wilson’s agent, Nat Taranpol. Considering Jackie was voted Entertainer of the Year for 1960-61 by Cashbox, it seemed that Rosie would have continued career advancement under her new management. She made one more single for the label that same year, “My Darling Forever,” and followed it up with an album, which met with little chart success.

But that’s all right. The following years found “Angel Baby’s” legend growing, racking up more than 30 compilation album appearances and continuing as a cult favorite of major acts. Led Zeppelin gave Rosie a name check in the song “How Many More Times?” on their 1969 debut. John Lennon would also go on to record “Angel Baby” for his 1975 Rock ‘n’ Roll album. Although bootlegged at the time in a national TV campaign on an album dubbed Roots, the cut wouldn’t see an official release until a posthumous vinyl only compilation, Menlove Ave., in 1985.

In 1973 Rosie released another 45, “I Don’t Understand,” which became extremely rare, but save for a name check that same year on the Led Zeppelin album Houses of the Holy, (on the track “Dyer Maker” as well as the sleeve notes) that would be the last the general public heard of Rosie and the Originals for nearly three decades. She did stay involved in music, however, appearing at the occasional oldies show and, more important, establishing a music program for Logan Heights youth at the Barrio Station, which helped to mold further generations of musicians.

The year 1995 saw the band included in the One-Hit Wonder section of the Rock ‘n’ Roll Hall of Fame, and this began a revival of sorts. The following year Linda Ronstadt recorded a version of “Angel Baby” for her Dedicated to the One I Love album. Longtime fans were thrilled when, in 1999, renowned U.K. label Ace unearthed an entire unreleased album of demos recorded circa 1969, which were placed alongside the singles for a best of package. The new millennium saw Rosie become a favorite at festival stages all over the U.S,. the clear highlight of her more recent touring days being her appearance on the 2002 PBS music special, Red White and Rock. In the meantime, the releases kept coming. In 2000 new material from Rosie brought “Steppin’ Out in Style,” recorded with her current touring band, while Ace put together a wonderful career retrospective with more rarities, including vintage radio station promos, in 2001. Topping things off, Lennon’s “Angel Baby” finally made its belated CD debut in remastered form on the Rock ‘n’ Roll reissue as a bonus track in 2004.

Rosie spent her last days in New Mexico, making the occasional live appearance, although a lifelong love of painting had taken precedent. She had been battling fibromyalgia, a disorder that causes widespread muscular skeletal pain, since 2000. While it’s true that Rosie and the Originals fall squarely into one-hit wonder territory, it’s also true that “Angel Baby,” with its incessantly catchy, yet simple melody and teen-angst vocals guarantees pop culture immortality for this group of former National City teenagers. Rosie passed away in her sleep, in 2017, at the age of 71.

The Transformation of John Lennon