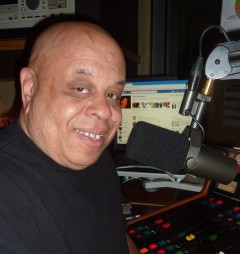 It’s always been about the radio for me.
–Ron Dhanifu

“I feel like I was born to do this,” says Ron Dhanifu. Dhanifu mans the afternoon slot, from 1-4pm, on KSDS, the local jazz station. When he says he was born to be a disk jockey, he speaks from experience. He’s spent 40 years in radio, 30 of them (in two installments) at KSDS.

Most radio stations have a program manager who determines the selection of music, as well as when those tunes will be played. KSDS does not work on that principle but rather allows its disk jockeys to play what they prefer. Dhanifu takes the lack of dictated playlists as both a privilege and a responsibility. “One of the reasons I can be here for so long at this radio station is the freedom, so to speak, of putting the show together, on your own merit — your own listening — your own ears. That’s one of the big plusses you really can’t find anymore.”
Dhanifu, a name given to him in 1969 when he started in radio, is West African, which means thinker or thoughtful; he doesn’t plan his shows. Before taking to the microphone, he saunters over to the Jazz88 library, picks out three or four discs, heads into the announcer’s booth, makes a selection, and auditions the others. Many times, he’ll reject selections and go back to the library. He makes his announcements without a script, all delivered in his relaxed and burnished tenor.

“What I try to do, each and every day, is put a well-rounded listening experience together. Since I’m on in the afternoon, I make a conscious decision to not play things that are challenging, because jazz is already challenging for the average person anyway. I don’t want to blast anybody away with John Coltrane’s Live In Seattle. I mean some people would like to hear that, and I would like to hear that but not in the afternoon. There are other times at the station where people can dig that.”

Dhanifu frequently sports a straw porkpie hat atop his immaculately shaven head, and he walks with a measured gait — the result of hip-replacement surgery. He cracks a smile easily and is always quick to laugh or engage people into a serious discussion on the state of music, a favorite subject for the man who has witnessed most of it develop.

Born in 1945, in Detroit, “around the same time as bebop,” he notes, his family moved to Los Angeles before his first birthday. He spent his first eight years in the Compton area before moving to Pasadena. “Those years in Compton were great for turning me onto music. My mother was a great collector of records, and I was also fortunate enough to live next door to a lady who owned a record shop whom I claimed her as my aunt. I used to go around and pick up stock and stuff, so I learned a lot about the music business, artists, and labels at a very early age.

“I heard the blues and everything on a little radio station in LA, called KGFJ — that was my focal point, my model. I said, ‘One day, I’m going to be a disc jockey.’” Dhanifu first “cracked the mic” at the Pasadena City College radio station, in 1965, at the age of 20, learning the mechanics of radio and picking up some valuable experience.

“The next radio thing didn’t happen until 1969 when I got on the air at KPFK, one of those left-wing radio stations; it was in North Hollywood. That was my first experience having my own show; they picked me to do a jazz show. I wasn’t getting paid, I was a volunteer, so I did that for about two years, and then, a man came on board by the name of Phil Watson, and he had the idea to set up a satellite station in the Watts area, which happened four years after the revolution. There were still burned out buildings and storefronts. I became assistant director, plus I was getting a paycheck, my first paycheck in radio.

“I played a lot of music that we called progressive. Not only artists like John Coltrane, but Archie Shepp and anybody who had it in their mind to be free and open, and to play music relevant to those times — Albert Ayler, Leo Smith. I called my show, “Sounds and Voices from the Black World.” I was there for almost five years.”
After a brief move to Oregon, where he spun country western and R&B, Dhanifu returned to LA, where he hooked up with KJLH. The owner, however, had a very restrictive aesthetic, and Dhanifu was eventually fired for playing a Bobby Womack record.

“I picked up a newspaper in 1976 and in the want-ads I saw this posting that read “operations-manager who knows jazz” and it hit me like a ton of bricks. I thought, ‘I’ve got to have this job,’ and it was in San Diego, at City College. So I came down here for the interview and I got the job. I got hired as the operations manager in 1977. I was here in the day and in the nights, I was also the music director.”

He spent almost ten years at KSDS. But in 1986, the combination of missing his kids and the lure of a much larger paycheck forced the radio man to make a tough decision. “So they offered me almost twice what I was making here. I thought about it for about three weeks, and I decided to go back to Los Angeles. I thought I could be with my kids, and it had been my childhood dream job to be on KGFJ, so, I took it. I left San Diego in 1986.”
Unfortunately, after a year at KGFJ, an upheaval in management left him out in the cold. In the ensuing years, he tried his hand at other aspects of the music business. “This buddy of mine started a record company, so we signed a few artists and tried to get that off the ground, and did that for a couple of years. So that was a good experience, I knew about the record business, and I learned more about it — but I still wanted to be on the radio. It’s always been about the radio for me. I still wanted to do that. I thought I wouldn’t miss it, and I tried to do other things, but it’s one of those things I realize now that I was born to do.”

He came back to San Diego in 1991, reconnecting with jazz radio, and exploring some commercial broadcasting opportunities as well. “I was on satellite radio for about a year. I did two programs for Sirius Radio in 2000. I did an R&B classics show and another one, it was a New Age show.” Dhanifu returned to KSDS and the afternoon slot in 2005.

After losing his second wife to cancer in 2007, Dhanifu shares his home with his dog Aja. Cooking is a passion but he still finds time to support local musicians, often making introductions for trumpeter Gilbert Castellanos or emceeing concerts by international artists like Joshua Redman.

“The thing about Ron is that he has really big ears… musically, I mean,” says KSDS Program Director Claudia Russell. “He can hear generations of music, genres of music, and see how all that plays into jazz and blues. That’s what makes him such a good programmer. And he’s just so real on the air. Nothing scripted, nothing phony. He’s one of the best radio hosts I’ve ever heard.”

Joe Kocherhans has the early morning slot and produces the excellent daily “Portrait in Jazz,” a one-hour musical bio show that airs at noon, directly preceding Dhanifu’s entrance. “Ron is one of our most knowledgeable hosts, with a long history in the jazz community, both in San Diego and Los Angeles,” Kocherhans said. “ His experience and insights into jazz are matched by very few.”

Through the power of his show, or by direct involvement, Dhanifu’s presence is felt. Listener Barbara Wise is well-known in jazz circles and is a personal fan. “I love listening to his show,” Wise said. “Because not only does he pick great music, but he teaches me something in the process.” Local vocalist Sharon DuBois says, “Personally, I have a profound respect and gratitude for the man and his support of local musicians,” said DuBois. “ He’s a great asset to the community.”

Being in jazz radio all of these years has had it share of perks, like meeting some famous musicians. “I met Miles a couple of times, [laughter]; he never said nothing. I got to be pretty good friends with Freddie Hubbard. He didn’t like too many people, but for some reason I could always spend some time with him. As a matter of fact, he came to my wedding.”

“This music has been the culture of me since forever. And I’m glad that I’ve had an outlet for it. And the outlet that’s physically here is KSDS. The only reason I’m in San Diego is because of the music. I was here 10 years the first time and 20 years the second time, so I just want to be recognized for what I’ve done.”

A Conversation with Ingrid Croce and Jimmy Rock