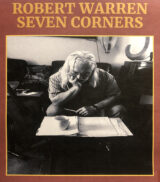 Robert Warren is a storyteller as revealed in his ten-track CD Seven Corners, produced, recorded and mixed by Wolfgang Grasekamp. Much in the style of Harry Chapin and Leonard Cohen, Warren accompanies himself on acoustic guitar, gracefully embellished by Grasekamp’s piano, accordion, and keyboard orchestrations.

The opening track, “Ida May,” tells the story of one roadside waitress, accompanied nicely by Mike Alvarez’ cello motifs. “She knew each driver’s name…and what whiskey they were drinking…and the secrets they were keeping…but no one felt her pain,” followed by “King of Pain,” with the austere verse: “I can be unkind and heartless…the reason for your shame…I am the king of pain.” And, in “Saint Cecilia,” a moment of repentance: “Saint Cecilia… sing a song and ease my pain.”

There are songs with stories of unrequited love as in “If I Had Wings,” “Angel on Berger Street,” and “Slow Dance.” The minor-key track “Brown Leaf” is a moment of life reflection: “Brown leaf falling down…surrenders to the winter…slowly spinning round until the autumn ends.” The touching “Hello Dad” is an homage to all paternal relationships. “I remember what you said…a father’s love will never end…even if you break his heart in two.”

“7 Nights in Austin” is a well-crafted diary of a week in and around Austin’s infamous 6th Street corridor. “I played my songs on 6th Street…for the junkies and the barkeeps.” The CD concludes in regal fashion with the track “Dear Jane” (music and lyrics composed by Jim Aitken), a fitting ending with a soldier’s correspondence from a war-torn arena. “You hear the church bells ringing…triumphant voices singing…you can take it I’m on my way home… though the deep blue water parts us…they’ll never separate us…for your letters made sure I was not alone.”