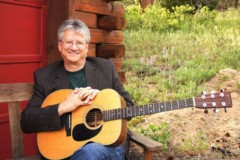 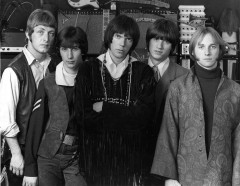 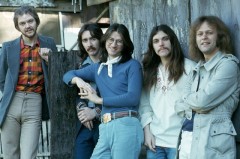 The story is, by now, a worn-out clichÃ©. It even shows up on network television shows like Nashville: the influential elder statesman who helped establish a form of music popular today is granted meetings with record label A&R executives “out of respect” to hear his newest, vital work, only to be told “no” regarding label support for release, promotion, and distribution. Oh, the A&R executive loves the music, mind you. “It’s great,” they say. “The best of your career,” they add. “But, we can’t help you.”

This has been the experience for veteran Rock & Roll Hall of Famer, Richie Furay.

It’s a story that’s hard to fathom. Especially when the work is as good as his latest soon-to-be-released album: Hand in Hand has a February 14th release date. His experience shopping for interest in this new album is reason for pause in Americana music, a genre known for its appreciation of timeless, age-defying, and cross-generational music. That it took this long to find a label for the co-founding member of the Buffalo Springfield and Poco; a peer of Neil Young; Stephen Stills, Jim Messina, and Timothy B. Schmidt, is even more enigmatic and frustrating.

While ageism is all too common in the world of music today, the Americana scene has offered shelter from such clichÃ©d responses to many veteran artists like Johnny Cash, Levon Helm, Rosanne Cash, Loretta Lynn, and Dr. John. Richie Furay deserves better. His new album is as vital, fresh, and passionate as any of the new releases by younger artists. It stands alongside the best work of his peers today. Hand in Hand can also serve as an introduction to Furay, whose career spans over five decades.

The album begins at the beginning of his story, which goes back to his Poco days when it looked like the sky was the limit.

This first song, “We Were the Dreamers,” opens with a lead guitar intro that echoes Paul McCartney’s simple riff from “The Two of Us” on the Beatles’ Let it Be album, but then crashes into a familiar electric major 7th chord change, which is unmistakable in its Springfield essence. He rocks us through lyrics that reflect the simple truth about Richie Furay’s legacy, best summed up in the term “visionary.” His words are a testament to the sound he helped create and his influence reverberates today. “We Were the Dreamers” is more than an exercise in nostalgia or a history lesson; it is a quicksilver lightning-lit journey through the past to present day Americana music. Furay starts us with his past glories, referring to his earliest days with Poco when they were the hottest country-rock band out of L.A., on the threshold of phenomenal national success.

It’s been 40 some years, 1969 Â
On that Troubadour stage, it just seemed like our time Â
Laurel Canyon and Sunset that’s where we called home
We made certain our music had a sound all its own

Then he leads us to a present-day country music scene, where acceptance of rock and cultural undertones is a given — something he helped create:

Today, out in Nashville, it echoes the sound
But back then redneck and hippie wouldÂ  never be found
on the same stage together, a few got it for sure
Today it’s just music, nothing less, nothing more

For Furay, who is undeniably humble and grateful for his place in music history, these words are not a matter of pride or arrogance, but a statement of fact. “We Were the Dreamers” sets the pace as he sings about the redeeming and healing power of music, faith, love, and unity in the face of troubled waters ahead.

The Rock ‘n’ Roll Hall of Fame inductee, who recently turned 70, was an important balancing member of the Buffalo Springfield. He made the all-too-brief historic 2011 reunion possible and creatively plausible. As in times of old, he offered a counterpoint to the critical, often tense creative energy between Stephen Stills and Neil Young — rivaling guitarists and singer-songwriters. Back in 1967, it was Furay who sweetened the sound with high-harmony vocals, a dynamic stage presence that usually found him dancing with guitar in hand to his own unique songs. He led the band into a full-fledged country-rock sound that was as adventurous as it was inventive.

To many, during the 2011 tour, Furay was the element of surprise, the artist many Springfield fans had lost track of since the time he first blazed the country-rock trail. As he sang lead vocal on familiar classics like “On the Way Home,” “A Child’s Claim to Fame,” and “Kind Woman,” he stepped out from the shadows of the iconic Stills and Young to a spotlight of his own, less worn and tattered around the edges than his Springfield comrades. The reviews of the shows in San Francisco, Santa Barbara, Los Angeles, and Bonnaroo, Tennessee uniformly praised Furay’s presence, energy, vocal power, and contributions to the band during the tour. In spite of a scheduled 30-city national tour, the band would return to their 40-year silence after their final appearance at Bonnaroo (a decision made by the ever changeable Young). But Furay was still restless with the creativity the tour had sparked.

Today, as Nashville producers casually bring in elements of rock music with popular young artists, as the Eagles forge ahead on established sold-out arena tours with constant radio and Internet airplay, and as new artists build on the country-rock sound forged so long ago under California skies, Richie Furay’s influence is tangible.

Even so, the most common response when people hear Furay’s recent albums is, “Man, he sounds like the Eagles!” To be more accurate, the opposite is true. The Eagles adapted Furay’s sound long ago. As he tells it today, it was Glen Frey who once helped Poco draw up their set lists for their early appearances. He and Don Henley were present at the band’s early rehearsals.

Poco’s original engagements at Doug Weston’s Troubadour in Los Angeles were a high-water point for much of the fledging Southern California country rock scene, where artists like Rick Nelson and the Eagles would take their cue from Furay for their own musical direction. The Poco shows and the subsequent tours were dynamic, energetic, passionate, hard rocking performances that took no prisoners. Furay was the undisputed front man for this trailblazing band that saw two future members of the Eagles pass through its ranks (Timothy B. Schmidt and Randy Meisner). Poco never attained the level of stardom found by imitators like the Eagles, but their mark was felt and capitalized upon.

Furay was so important to the country-rock sound that Eagles’ label owner, David Geffen, signed him to Asylum Records, where he released a pair of albums with “supergroup” Souther, Hillman, and Furay (SHF), scoring a Top 20 hit with his own song, “Falling in Love.” SHF never quite worked as a cohesive band and disbanded during the recording of their second album. This was followed by a series of critically acclaimed but commercially failed solo albums, released between 1975 and 1981, most notably I’ve Got a Reason and Dance a Little Light.

It was after 1981 that Furay quietly withdrew from mainstream popular music, raising his family and taking on a Calvary Chapel pastorate at his home in Broomfield, Colorado. During the intervening years, he released two devotional Christian-based albums — In My Father’s House and I Am Sure — with the help of Poco members Rusty Young, Paul Cotton, and Jim Messina.

When he remerged in 2003, the country-rock focused Heartbeat of Love was the fulfillment of his post-Poco career promise. His soulful energy drove the good-time surface of many of the songs. But, it is that soul beneath the style that gives his work its timelessness. It was his prodigal return to country-rock, which also included Stills and Young on separate tracks.

Heartbeat was a reminder of the strength of Furay’s signature vocal sound. It is the natural, effortless style of his voice upon which others have built their own vocal styles. While the sound may be similar, it’s the soul beneath that is impossible to recreate. He merges Buck Owens and Otis Redding. In his own unique way, he is as much a soul singer as he is country.

It’s the authenticity of his voice that makes Hand in Hand is such a pleasure. His voice is in full force, driving the melody and the rhythm through familiar territory and into the rough terrain of life today. Not so young anymore, but quite a bit wiser, he is always ready to rock.

On this new album, he sounds more like an impassioned artist in his ’30s rather than a seasoned vocalist who just turned 70. Hand in Hand adds nuance and dimension to what he started on Heartbeat of Love. It is an album of signature Furay country-rock that calls up the best spirit of the Buffalo Springfield and Poco. While the album still carries the expected love songs and good time rockers (“Still Fine” “Love at First Sight”), much of the album reflects his latter day Poco and ’70s solo work. He moves into deeper waters with a global message to America as a country of people divided and disillusioned by economic woes and political controversy.

After “We Were the Dreamers” aptly opens, Furay turns back to his “Kind Woman” for inspiration on the title track, “Hand in Hand,” and delivers another classic love song that stands alongside “Good Feeling’ to Know” and “Just for You and Me,” from the peak of his Poco days. There is a gospel-soul feel to his interpretation of an obscure Dan Fogelberg song, “Don’t Lose Heart,” which is infectious, inspiring, and goose-bump producing.

The album turns on three songs about the American journey in the second decade of the 21st century, a trilogy of sorts. These are the center piece of the album. “Don’t Tread on Me” is a call to patriotic unity over the politics of partisanship and speaks to today’s polarization and divisiveness. This is Furay transcending his familiar love song themes. It’s the same artist who once reached out to his friend Gram Parsons as he was fading into his own self-destructiveness with the impressionistic epic “Crazy Eyes.” On “Don’t Tread on Me,” Furay sings to the people of America. It is a call to unity: “My heart bleeds red, white, and blue as I recall / united we stand, divided we fall.” It asks us to bypass political bias to remember our collective “heart of gold.”

“Wind of Change,” with an underlying fiddle and banjo, speaks to the hope of a new day in the aftermath of a current discouraged and burned-out America:

When the sun shines in the morning,
Bringing the dawn of brand new day…
If we can just hold on until tomorrow,
Maybe we can set things straight again
Before we lose it all to the wind.

“Someday” completes the trilogy with hope and an upbeat tempo that is danceable in the best Poco sense. It’s a celebration of the soul familiar to Furay’s best work, pointing us to healing, hope, and faith as we return to our better angels.

Hand in Hand is among Richie Furay’s strongest albums with a clear statement of both musical vision and personal growth through dark economic and spiritual times. Its soul rests on the hope found in what Furay has communicated throughout his career: the heart of musical expression centered on faith and celebration is our greatest resource, be it for a night of good time music or a life built on the hope of things unseen but known to be true. Its appeal is in the melodic energy and inspiration found in one of America’s founding fathers of country-rock.

A Conversation with Pepe Romero