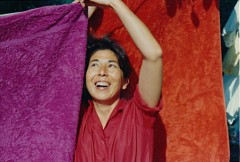 Toshi Seeger in her younger days

If Americana music is about connection, then when one of us passes away, we all feel the loss. I feel it today in a distinct if distant way. In the story of so many artists of the last 100 years, little is ever written about the soul of many of our greatest contributors to the American songbook: That soul would be best described as those closest to them, who keep them going in a muse-like fashion. For Pete Seeger a deep part of his own spirit and his ever-present partner and supporter was his wife of 70 years, Toshi Aline Ohta-Seeger, who died last month at her home in Beacon, New York, just days away from her 70th wedding anniversary. She was 91.

Pete Seeger’s life has always been devoted first to the passage of folk songs from generation to generation. But, like any great artist aware of his time, he has been equally involved in activist movements that impacted on the environment and help for the socially oppressed. Toshi was quite literally the embodiment of his songs. Toshi’s father came from Japan, an exile by proxy for his father, who had found the disfavor of the Japanese fascists in the early part of the 20th century. He met her mother, who was running a tea-house in Washington D.C. to pay for the health care of her ailing father, when she hired him as a dishwasher. They were married soon afterward. Born in 1922, Toshi grew up as the Greenwich Village progressive movement and musical renaissance was in its infancy. That world of celebration, creativity, and compassion became her life-blood. And so, it would be natural, when a young, lanky banjo-playing folk-singer named Pete Seeger sauntered in to play for her square dancing group, that a life-long connection would be born. Together Pete and Toshi Seeger became part of one, united soul who brought to their world a sense of compassion and joy through the celebration of music and constant involvement with healing the earth and its people. This was especially true in their efforts to clean up the Hudson River.

They were like no other couple of the last one hundred years, leaving a positive legacy that took fruit in the Great Hudson River Revival. Toshi was the artistic programmer for the annual music festival. She was known to be a great organizer. Pete Seeger has said, “After 66 years of trying to organize me, it’s no wonder!” She was also known to be the finest of mothers, the grandest of grandmothers, a skilled gardener and, based on popular legend, conveyed through Pete’s well-loved song “A Little Bit a This; A Little Bit a That,” a great cook. On his spoken word recording, Pete said, “To say Toshi is a good cook is like saying Louis Armstrong is a good trumpet player.” She cooked her famous stone soup for over a thousand people at the first Clearwater Festival when the participants contributed the ingredients.

My personal encounters with Toshi Seeger were remote at best, but bear repeating. Twenty years ago, a DJ friend scheduled a phone interview with Pete. She was to call him at a certain time in the afternoon. When she called, Toshi answered. “May I speak with Pete Seeger?” Toshi replied, “Pete? Oh, he’s doing the laundry.” Then she put down the phone and called out, “PETE! It’s for you!!” It seemed for Pete and Toshi that dealing with the press was no different than doing the laundry.

In 1993, I attended the annual Arlo Guthrie and Pete Seeger Thanksgiving Concert at Carnegie Hall in New York City. My friend Dee Jeanne, who is a disabled PhD from New Jersey, was in an electric wheelchair. As we arrived back stage with help of the elevator, we came into through a hallway to a room full of people. There to greet us was Toshi Seeger. She played the airport runway attendant mocking flashlights in each hand as she shouted, “CLEAR THE WAY!” waving both hands in straight lines.

With the passing of Pete’s life-long wife and partner, though the loss is subtle, it’s saying goodbye to an important part of the legacy of folk music over the last 100 hundred years. As her grandson, Tao Rodriguez-Seeger recently told NPR, “Without my grandmother, there would be no Pete Seeger the way people understand it. That’s not an exaggeration. She kept everything working so that he could focus on the world-saving, civil rights, anti-nukes, Clearwater — all of the projects that my grandfather worked on.”

The best way for anyone reading this to honor Toshi AlineOhta-Seeger may be to listen to this warm remembrance of his wife by America’s most beloved folk-singer, Pete Seeger: http://soundcloud.com/hachetteaudio/peteseegerstormkingtoshi

This article first appeared in No Depression online magazine. Reprinted by permission from Terry Roland.

After a Decade, AMSD Concerts Continue to Raise the Bar