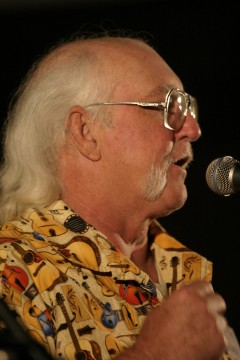 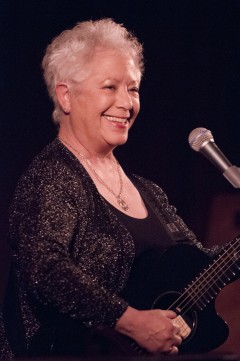 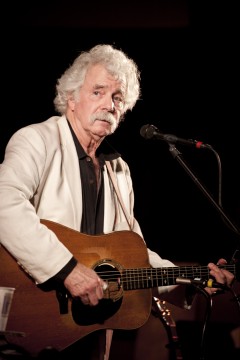 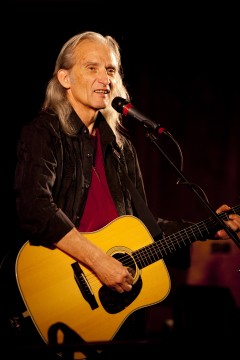 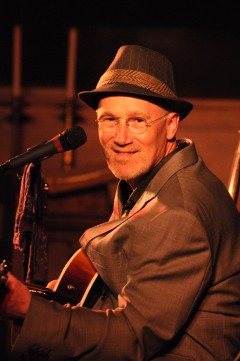 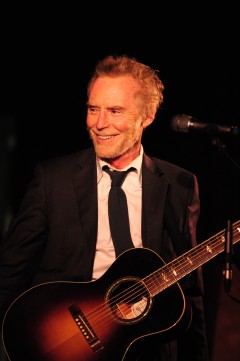 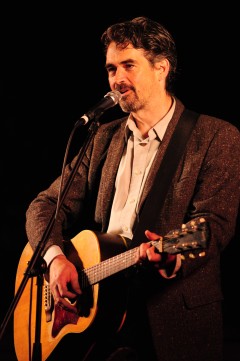 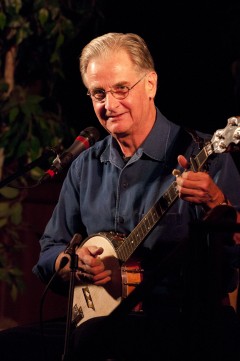 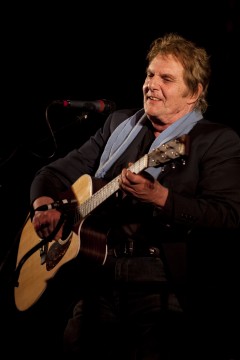 Dave Cousins of the Strawbs told the audience what a privilege it was to have Sandy Denny in his band before the legendary British folk-rock icon joined Fairport Convention. Jimmy Webb revealed in his sold-out appearance that “Galveston” was really about Vietnam. And an animated Al Kooper shared his initial feelings of despair when he learned that Gary Lewis — of all people — was going to cover his soul composition “This Diamond Ring.” (His agony to turned to ecstacy when Lewis took the song to number one in 1965 and Kooper was handsomely rewarded.)

There’s something about the peaceful confines of an old Normal Heights church which brings out the storyteller in a musician. Over the course of the decade, audiences and artists have forged a bond in one of the most successful concert series in local music history: AMSD Concerts. Since August 2003, founder Carey Driscoll and his dedicated volunteer staff have seen audiences warmly embrace a new act and give a hero’s welcome to the familiar face and name.

It’s interesting that San Diego (SD) is in the title of the series, for Driscoll is a high school grad from the South Bay, and that practically makes him a “native” in these parts. He is modest about his own accomplishments and prefers to talk about AMSD rather than himself. But for the tenth anniversary, the Troubadour felt it necessary to provide a brief biographical sketch of the guy in the ball cap who serves as the host for every AMSD show. “I was born in August 1950 in Rhode Island, because my dad was stationed there in the Navy, but I think we left within months of my birth,” said Driscoll. “I went to Marian High, a now-closed small Catholic high school in south San Diego, near Imperial Beach. I went to San Diego State.” Just like many Baby Boomers, Carey was drawn to the radio. “I lived in Memphis from 1956-1959, when I was 6-9 years old. I don’t remember anything specific as far as music, but I remember listening to the radio every night as I fell asleep. If it was baseball season, it was to the play-by-play of the Memphis Chicks, a minor league team, but if it wasn’t, then it was to whatever local radio station I’d become attached to.” After baseball came rock and roll. “Around the time the Beatles hit it big, I wanted to learn to play guitar, so my parents bought a used guitar for me from a local pawn shop where we lived at that time. It was a hollow body electric — more of a jazz guitar than a rock guitar. After a few weeks of frustration, thanks to strings that were impossible for me to press down, probably because I’d become obsessed with the drum set owned by a school friend, I convinced my dad to return the guitar and exchange it for drums. But all we could get in a straight exchange was a snare drum, hi-hat, and ride cymbal — so that’s all I had to play for awhile. In retrospect, my parents must have been even more supportive than I’d probably realized at the time — when you think about the torture of having to listen to their kid play along to records in his bedroom on nothing but a snare drum and cymbals.

“But I progressed very quickly, thanks in large part to an older teenage neighbor who was in a band, and who let me borrow — and keep at my house — a spare drum set he had. I formed a band and we quickly began to play gigs — at the enlisted club on the base we lived on and at local teenage clubs around the town the base was near.”

Carey said it was “a few years later, after moving back to the San Diego area, I started trying to learn guitar again, mostly by picking up a guitar owned by one of the guys in the band I was in during breaks in our practices. By then, I was a mid-teen, going to parties and seeing the girls all flock to the guy who’d brought a guitar; a set of drums just wasn’t quite as easy to bring to a party, so I was probably a little more motivated to learn how to play guitar than I’d been a few years earlier.”

With the biographical sketch completed, the discussion changed to all things AMSD.

San Diego Troubadour: When and why did the idea to create a acoustic-based concert series bear fruit?

Carey Driscoll: I blame it all on the internet. I don’t even remember when it was, but probably mid to late ’90s I got a computer and then found some online groups [Yahoo Groups] for fans of certain artists I was a fan of. That enabled me to see where those and other artists played and, more relevantly, where they didn’t. For many of the people I listened to, San Diego fell into the “where they didn’t” category.

After awhile, including going to house concerts to see some of the decidedly lesser known artists I was interested in, it was clear that the people who were putting on house concerts could only do five-ten shows a year — with half of those shows being returning artists and a few being local acts — and I felt that there were far more artists who should be playing in a market this size than that. The final impetus was when a singer-songwriter I was a fan of, and had helped get a couple of gigs here a year earlier, couldn’t get re-booked when he was coming back to the West Coast. The house concert he’d played was no longer in operation, and the venue he’d played was also closed. I tried and tried and tried to find a place that would book him, and when I couldn’t find anyone who would, I found a place I could rent and did it myself. From there, it grew very quickly — so much so that in the first full year of AMSD, we did almost 60 shows.

SDT: The very first show in 2003 was held in a music store. It featured Jack Williams and you said it sold 27 tickets. Shows two through seven were held at the Normal Heights Community Center. After that, you moved into a permanent home, the Normal Heights United Methodist Church.

CD: I knew the church was used for things like the Adams Avenue Street Festival and Roots Festival, so once I knew I’d have to find a place other than the community center, I began trying to convince them to let me rent the church for my shows. Rental income times 50-60 or more shows a year versus an empty building was my main sales pitch.

SDT: For many years, the concert series was known as Acoustic Music San Diego. What was the decision to switch over to just the initials AMSD? Â

CD: After hearing too many times “I didn’t come see so-and-so because I didn’t think of them as an “acoustic’ performer” about acts that had played electric instruments, including full bands with drums and amps in some cases, at AMSD, I did what I’d thought about doing since much earlier: remove the word “acoustic” so it wouldn’t be interpreted as 100% literal and for every show.

When I did it was before one of the Ambrosia shows… I was preparing flyers to pass out outside Humphrey’s when a group that was playing there seemed like their audience would be the same audience that Ambrosia would draw.

SDT: Selecting the artists to play is, I can imagine, never a perfect science. How has this evolved over the last decade? Are you finding more artists contacting you based on the reputation of AMSD? There seems to be a high percentage of artists who are enthusiastic on returning for future shows.

CD: From very early on, contacting me (by booking agents) replaced contact from me for the majority of my bookings.

SDT: You have loyal concert goers who will attend a show without having seen the act based on your e-mail posts. I guess we could bring up the recent Vagabond Opera show as an example.

CD: Well, that’s true but not nearly to the extent I thought it would be after ten years. Part of the problem is that we’ve lost a lot of formerly good customers — mostly due to moves away from this area — and it’s been years since a new customer became a fairly frequent concert-goer.

As for Vagabond Opera: I had to resort to offering tickets at half price and begging, but we ended up with a decent number. Far from what everyone who came — and I — felt we should have had, but that’s the norm except for known names. The fact that it’s still so hard to get people to come see anyone they don’t know and/or that’s different in any way is the single biggest surprise and frustration I continue to experience.

SDT: The post-concert “meet and greet” is a unique aspect of AMSD. Was this a tradition from the very early shows over something which evolved over time?

CD: It’s been that way since the first show, and I can only think of one or two artists who’ve refused to do it.

SDT: You have a volunteer staff who are essential to the AMSD operation.

CD: The staff we have now has been with us, by far, the longest of any volunteers we’ve had at any time, and they’re beyond great. Not to diminish the contributions of anyone who’s no longer volunteering with us. And my need for the help has increased a lot, as I’ve become physically less able to do things. Even in my long-past most articulate days, I’d have had a hard time coming up with words that adequately expressed my appreciation for what they do for AMSD.

SDT: It’s been a fast 10 years. There could conceivably be a time when the curtain will come down on AMSD. If I don’t get to ask you then, I will ask you now: what has been its legacy, it’s major accomplishment?

CD: That seems like a question for others — one that, depending on how I answered it, could easily come off badly and rub people the wrong way. Having said that, I guess my hope would be that its legacy will be consistent with comments I’ve received, in some cases over and over from the same people about how much some people love and appreciate what AMSD has tried to provide: quality artists, in a reasonably nice and intimate setting, at reasonable prices. Good sound quality and a focus on the music, not a place where the music is secondary to drinking, meeting members of the opposite sex, or any of the things that push music to the background at a lot of other venues. Unfortunately, the reason that some people are drawn to AMSD also keep a lot of other people from coming to our shows.

I’m proud to have done as much and as well as we’ve done with very little in the way of resources — other than the best resource of all: a great group of people who’ve given a lot of their time to AMSD.

AMSD celebrates its 10th anniversary this month with John Reischman and the Jaybirds on August 3; the Honeycutters on August 14; and Billy Joe Shaver on August 23. Visit http://www.amsdconcerts.com/ for ticket information.