February 2023
Vol. 22, No. 5
Music: Life After 40 by Charlie RecksieckJune 2015
Lady Brain Presents “Home is Where the Art is” Holiday Party and Clothing Drive by Lindsay WhiteJune 2015
How Did You Get Here? by Chuck LapinskyJune 2015
Aging Rockers and Fixed Incomes by Paul RosengardJune 2015
Doors of Change: An Environment of Trust June 2015
Notes from Desert Trip by Matthew BurkeJune 2015
Hail the Conquering Groovies! by Steve ThornJune 2015
The Spring Harp Festival Blows into La Mesa on Saturday, March 26 by T.E. MattoxJune 2015
MARTIN GRUSIN: A Loving Tribute from his Daughter by Aryn GrusinJune 2015
Ballads and Blues with Jeffrey Joe and Eric Freeman June 2015
Advertisements 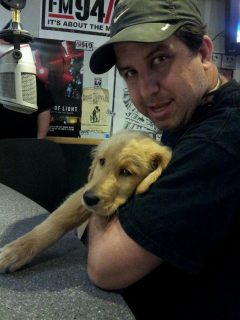 I write in this corner of the Troubadour about performing and writing music. In this installment I’m divulging the dirty little secret to you about one of the most important facts about ME performing: I’m over 40.

Okay, maybe my age isn’t a secret to anybody’s who’s seen me in person. Anybody taller than me or who I’ve bowed to can see a growing Friar Tuck bald spot metastasizing on my head.

Playing music is really only a small part of playing music. What I mean is the actual performing, in my case singing and playing the piano. And I’m proud to announce that that part gets better and better. Over the years you pick up licks and tricks about how to play your instrument. I’m always learning about how to read a crowd and playing to them (and playing with them) … I’m better than I was five years ago and not as good as I’ll be five years from now.

And when it comes to singing, I’m a huge believer that singing is something you can learn. Sure, none of us can will ourselves to become Aretha Franklin, Art Garfunkel, Mariah Carey, Sam Smith, or Adele. But one does learn how to sing and phrase. That’s a whole article for another time. The only concession to age is the sticky fact that your range shrinks, you can’t hit high notes as well as an old man. I’ve heard quotes from tons of aging rock stars lamenting that if they had known they’d still be singing those songs 20-30 years later, they would have written them in a lower key. If you want an example of who was a genius at that, listen to Frank Sinatra. His songs were all arranged to be downright gutteral, my grandfather could have sung “Summer Wind” or “It Was a Very Good Year”.

The performance portion of playing live music aside, the rest of being an indie performer outright stinks as you get older.

For starters, there’s the fatigue of what it takes to play live. I’m talking about load-in and load-out of gear. Unless you’re just a singer, harmonica player, or trumpet player, this is a huge pain. You are dragging cases of equipment in and out of restaurants, bars, improvised festival stages, and often in a hurry if there are multiple acts on the same night. (In the future I promise to write my tirade about the next band getting in your way when you try to load out. My blood pressure is rising just thinking about it, so I guess high blood pressure is old musician symptom #23.) You’ve got to do this in a hurry, hopefully without causing you to break out in a sweat. And there are inevitably stairs. Stairs are the enemy of every indie musician. I used to just carry my 100+ pound keyboard case like a freakishly large briefcase back when I was strong; now it takes a team of three or four to have me park at the curb and get gear into the gig.

There’s an aphorism in music: “You don’t get paid to play, you get paid to move your gear.” That gets truer as I get older. Once my gear is in and I’m on stage, I’m totally fine playing for four hours. It’s all a stall tactic. Deep into shows, I wanna play encore after encore when I think about having to pack up and get keyboards (plus P.A.s, speakers, cables, mics, stands) back into the car. Short of literally dying onstage, there’s literally no escape from a load-out.

Here’s another thing I miss out on by not being a young indie musician: having friends who aren’t parents and/or exhausted. Why do clubs love booking a young, first-time band? 22-year-olds tell their friends that there’s a show and they all come? Do you know how rare that is for an older performer? Ask your musician friends for the excuses they get from people who said they’d come to their shows. Later in life, a lot of your friends’ excuses start to be of a gastrointestinal nature.

Sex, drugs and rock ‘n’ roll are not for the old, or faint of heart. Okay, the rock ‘n’ roll part is still great. The sex tends to anger your wife. In my case, the drug of choice is thyroid medicine. (Can I take a bow for being a thyroid cancer survivor here? I keep forgetting to look for cheap sympathy that is totally unnecessary. All good here.) Or the other good drug is proactive Advil after you’ve had a few drinks.
And just flat out staying up late can be a problem for us geezers. Not a problem, just an annoyance. Despite having played some bigger audiences and been on great and semi-prestigious stages occasionally, here is my favorite gig and see if it resonates with other performers in my boat. Winston’s happy hour gig in Ocean Beach on a weekend from 5-8pm. Three hours of fun playing with the band, free beer, enjoying time with people who like the music, taking the door money to Hoodad’s for burgers, driving home and being drunk in bed by 9:15pm. Rock ‘n’ roll! (Hey kids! For the record, don’t drive drunk.)

I truly hope it doesn’t sound like I’m complaining. I’m not. Music is an addiction. A wonderful addiction that just about all musicians truly love. To quote a not yet fat and old Van Morrison, “It’s too late to stop now.”

Charlie Recksieck is a San Diego songwriter and musician with Leaders in the Clubhouse, The Bigfellas, and some soundtrack work.
Twitter: @thebigfellas @litclubhouse

Fourth of July Festival in Escondido!