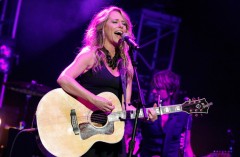 Mary Chapin Carpenter is a rare artist in the fickle and too-often pre-packaged world of popular music. She is a successful songwriter who never set out to write hit songs. But, she did. Early on she was ear-marked for the country music market place. She did remarkably well, scoring a multiple platinum hit album during the period of country music Steve Earle has called, “the great credibility threat of the ’80s.” It was a time when country radio out of Nashville, for a reason still not explained or understood, championed artists like Earle, the Desert Rose Band, Lyle Lovett, Roseanne Cash, Dwight Yoakum, Sweethearts of the Rodeo, Emmylou Harris, and k.d. lang. For a few short years, it seemed that intelligence and a focus on quality had hijacked mainstream country music radio. The “threat” didn’t last long, but for a short time a series of fine artists were nurtured with airplay and support from the country music establishment; many of them have made a successful transition to the emerging Americana music scene during the years since 1993 and now maintain elder statesman/veteran status as respected and still-vital artists.

Mary Chapin Carpenter was among the most successful and enduring stars from this golden era of country music. Her road always seemed destined for something special.

After being raised in Washington D.C. she drew most of her early music influence from her older sisters’ album collection, which included the Mamas & the Papas, the Beatles, and Judy Collins. It was during high school that the guitar and piano became her quiet obsession.

During her adolescence she was painfully shy, making her music an intimate and solitary venture. It was Carpenter’s father who nudged her into playing a local open mic night in a suburb of Washington D.C. While she described her feelings at the time as, “I thought I was going to barf,” it was a transformative experience that allowed her to break through her shyness and become a performer of the songs she was writing at the time. In the end, she hosted an open mic night near Washington D.C. for many years.

For singer-songwriter’s who have had the kind of success experienced by Mary Chapin Carpenter, it all boils down to a combination of talent, hard work, good timing, and luck. For her it all began to fall into place when she met guitarist John Jennings, who would go on to become and collaborator. He encouraged her to emphasize her own songs over covers. As fate would have it, she was a gifted songwriter with a warm, embracing voice suited perfectly for the kind of folk music familiar to Joan Baez and Judy Collins. So, when she landed a record contract with Columbia Records, it was natural to market her to an audience savvy to folk music and the singer-songwriter tradition championed by James Taylor and Carole King a decade before. So, her debut album, 1987’s Hometown Girl, focused her folk side. The result was a strong debut of original and carefully selected covers, such as Tom Waits “Downtown Train,” two years before Rod Stewart’s #1 hit of the song. She also recorded a version of John Stewart’s “Runaway Train,” which later became a #1 country hit for Rosanne Cash. Carpenter’s version of the song was scrapped.

With her second album, Columbia found that Carpenter’s success was destined for the country music market. The year, 1989, was at the peak of the “great credibility threat” when some of the finest country artists were at the top of the charts. The timing was perfect for the East Coast singer-songwriter to take hold and gain the kind of audience most artists only dream of having. The 1989 album, The State of Heart, demonstrated for Carpenter and her label, to their surprise, that her path to fame was going to be as a country star. With four songs charting in Billboard’s Top 20, it was clear that her blend of folk and country music, with an emphasis on original songs that were as reflective and thoughtful as they were upbeat, had found its audience.

Her follow up album, Shooting Straight in the Dark, added four new songs to her hit arsenal, including “Down at the Twist & Shout,” which charted at #2 and gave her a Grammy for Best Country Vocal Performance. The song also included the Louisiana-based Cajun band BeauSoleil.

All the while, each album was filled with original songs that still stand as timeless examples of a singer-songwriter on a successful career path without compromising her vision or straining to be what was expected of a country music star at the time. A rare thing in today’s country music scene.

But, it was 1992 that would find Carpenter hitting the sweetest spot of all for an artist who began as a singer-songwriter: a hit album that is today regarded a classic in not just country music, but also in popular music in general. Come On Come On yielded seven hit songs for the singer-songwriter and a quadruple platinum-selling status, becoming the most successful album of her career. But, it wasn’t only the popularity of the album that made it so successful. It is today deemed a classic of the era with uncompromising country-rock songs that explore themes not often found on country radio. An example is the hit “He Thinks He’ll Keep Her,” which portrays the plight of modern women who are regarded as objects and property by their husbands. The song was inspired by a Geritol commercial from the 1970s where a man boasts, “My wife. I think I’ll keep her.”

The song also helped to bring singer-songwriter Lucinda Williams to the light of day when Carpenter covered the hit “Passionate Kisses.” Prior to this, Williams had not found the kind of notoriety she gained after the song hit the charts. Today, she is an established icon in Americana music. It is this kind of supportive relationship with other songwriters and musicians that has marked Carpenter’s career since 1992.

Today, Mary Chapin Carpenter has continued to be an artistically successful songwriter without the burden of country music stardom to follow her. Her commercial success was never something that defined her, so when, as with so many of her contemporaries of the “credibility threat” era of the ’80s and ’90s, the record sales stopped being as successful, she simply continued doing what she has been doing since she began: writing honest heart-felt songs that carry the mark of intimacy and lyrical insights all delivered by her one-of-a-kind embracing and comforting vocal. There is a fine continuity to the string of critically successful albums since 1992.

The recent release of Carpenter’s new album, The Things We Are Made Of, finds the artist more contemplative than in her early days, but with no less a sense of insight and compassion. It is a narrative of an artist that has lived through seasons of change and still finds comfort in the reflections of her life in the present.

This time out, she is working Dave Cobb, who has most recently produced Chris Stapleton and Jason Isbell. Cobb is a producer who well represents a new, more authentically focused Nashville sound. The relationship between Cobb and Carpenter is similar to the one that was so successful between Rick Rubin and Johnny Cash during the country legend’s final days. Cobb allows Carpenter the freedom to explore her own lyrical and musical depths without interference.

For Carpenter, the relationship with the successful Nashville producer was gratifying and encouraging. As she recently told Billboard, “He wants you to be happy. For example, he was say the only answer to every question is yes. In other words, everything is possible. He never sees any roadblocks or insurmountable difficulties,” she said. “Every idea is worth airing and he’s just open that way. I think his belief is to let each artist be who they are. He’s not trying to impose upon them some notion of what he thinks would be best for them but, rather, he lets the artist bring what makes them unique into the studio. He’s utterly egoless that way.”

Based on her comments, Cobb was the perfect match for the Mary Chapin Carpenter, who paved the way for this kind of honest and egoless collaboration on her albums that began 29 years ago.

A stand-out song, “Map of My Heart,” is revealing and touching. The words run far deeper than the country hits of today. The song and the album illustrate how Carpenter has been a bridge between the singer-songwriter and the country star of the last 30 years. But, she’ll always be the star without the rhinestones, diamonds, and lace more typical of female country legends. Instead, she carries poetry that reveals deeply felt lessons of a life that has met as much sorrow as it has joy. The final verse illustrates the growth this artist has shown on this new collection of songs demonstrating how she has outpaced the country songwriting market of today. All the while the words reflect how she has grown as a human being with a spirit that is boundless as she soars along on the strength her own musical wings–a solitary soul who has gracefully opened her interior world to us all.

“And I can’t stop trying to hold in my hands, that moment I could feel my heart expand with more love than I thought could exist in the world. The hollows were gone, the emptiness filled a life transformed down to the bone, this map of my heart.”

Mary Chapin Carpenter will perform at the Belly Up Tavern in Solana Beach on Wednesday, September 28. Show starts at 7:30pm. For further info: bellyup.com

An Appreciation: Kris Kristofferson–Wide Awake and Feeing Mortal at 80