February 2023
Vol. 22, No. 5
Local Artists to Come Together for Gillian Welch Tribute July 2013
Lady Brain Presents “Home is Where the Art is” Holiday Party and Clothing Drive by Lindsay WhiteJuly 2013
How Did You Get Here? by Chuck LapinskyJuly 2013
Aging Rockers and Fixed Incomes by Paul RosengardJuly 2013
Doors of Change: An Environment of Trust July 2013
Notes from Desert Trip by Matthew BurkeJuly 2013
Hail the Conquering Groovies! by Steve ThornJuly 2013
The Spring Harp Festival Blows into La Mesa on Saturday, March 26 by T.E. MattoxJuly 2013
MARTIN GRUSIN: A Loving Tribute from his Daughter by Aryn GrusinJuly 2013
Ballads and Blues with Jeffrey Joe and Eric Freeman July 2013
Advertisements 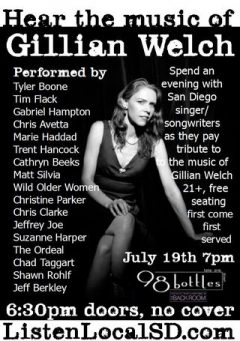 For those of you living under a rock, Cathryn Beeks is a local music promoter who, since 2003, has worked tirelessly to bring San Diego artists together for celebrations of community and music through her organization Listen Local SD. One particularly cool event at one particularly cool venue will take place this Friday, July 19th at 98 Bottles in Little Italy, where 17+ local musicians will gather to pay tribute to the music of Gillian Welch.

For those of you living under an even bigger rock, Gillian Welch is a lauded American songwriter who has been performing and recording professionally with her musical partner David Rawlings since the early 90’s. Â She has released five albums under her name, some which feature widely-acclaimed tracks like “Orphan Girl” and “Time (The Revelator).” Welch’s music is rooted in a familiar old-timey Americana/folk tradition but finds its own unique identity via dark tones, sharp lyrics, and haunting vocals.

It will be exciting to see how the many talented musicans of San Diego will interpret Welch’s trademark style this Friday. The lineup includes local talents such us Chris Avetta, Marie Haddad, Chris Clarke, Jeffrey Joe, Shawn Rohlf, Jeff Berkley and many more! I highly encourage folks who might not be familiar with the local music scene, or with the music of Gillian Welch, to get out from under that rock and experience one of Beeks’ famous all-you-can-hear music buffets! The best part? It’s free!