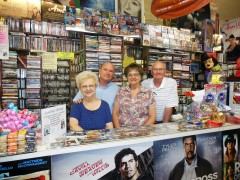 San Diego’s contributions to the film industry date back almost 120 years, to a time when the future Hollywood was just a collection of cantinas and horse ranches. In the 1890s, Thomas Edison chose San Diego as one of his first locations to test out his new invention: the movie camera. The result was some street car footage shot around where Horton Plaza stands today. Then, there was La Mesa’s Flying A studios where future Hollywood A-lister Allan Dwan would shoot over 150 Westerns starting in 1910. Over the next 100 years, nearly 800 films and TV shows were shot in San Diego. San Diego would also provide a weekend get away where stars could escape the increasing bustle of Hollywood.

It should be no surprise then that San Diego is home to one of the premier video stores in the country: Kensington Video. Now, this is no surprise to locals who have been frequenting the store since it first opened 28 years ago. But, few know that Kensington Video also serves regular clients and customers as far away as, yes, Hollywood, Mexico, and Arizona not to mention Scandinavia, England, and Japan. They are San Diego’s go-to place for renting hard-to-find, foreign, and little known movies.

Guy Hanford opened K-Vid (as it’s affectionately known) in 1985. His parents Winnie and Rich were running a Hallmark gift shop in the building since 1963. (In fact, the Hanford family is celebrating its 50th anniversary in the same building this year.) But, as interest in the gift shop waned, Guy, already a film buff who had worked next door at the Ken Cinema, convinced his parents that a video rental outlet was just what the community needed right at a time when VHS players were becoming standard fare in many American households.

The formula for many of the upstart video stores was to “buy narrow and deep,” meaning rent only the top Hollywood hits and rent a lot of them. But, Guy wanted to create something more genuine, a real movie archive, or library, that would cater to film aficionados, the college and intellectual crowds, and people looking for the more obscure titles. He began buying up silent, foreign, art house, and classic films. And, many of these films were seeing the light of day (thanks to video) for the first time in decades. Soon after, Guy added oddities such as the BBC collections. This was at a time when VHS and Beta were still duking it out.

It wasn’t long before Kensington Video had created a niche and had a reputation throughout San Diego County. “Everyone sent their customers to us,” Guy explains.

Another thing that set K-Vid apart was the family atmosphere. No chain store anonymity. A member of the Hanford family is on premises every hour that the store is open. “We even set up our Thanksgiving dinner in the Sci-Fi aisle one year and took turns manning the counter,” Guy adds. And, it’s this family commitment that makes customers feel like family also. “We had customers cry with us over the death of a loved one. We’ve seen couples meet and eventually marry. We’ve seen children grow up and become adult customers. The mom and pop family experience is disappearing throughout America and is such a cherished experience by those who appreciate it.”

In addition to Guy, Winnie, Rich, and sister Pam, Kensington Video always has a couple of young employees on hand. The turn over is low. In 28 years, they’ve only had about 20 employees, most who stay with the store throughout their college careers.

Their dedication to personal service has led to a repertoire of interesting stories: “One lady brought her VCR in to the store for cleaning. She could no longer get a picture. As she was looking around, I asked her if she had a white cat. She replied, ‘Yes, how did you know?’ I told her, ‘because half of his fur is inside your VCR.’ Once we removed all of the hair and cleaned the video heads, everything worked perfectly.”

Now, the greater San Diego community recognizes Kensington Video as not just a retail store, but an institution. Mother Winnie was recently awarded a Winnie Hanford Day by the City of San Diego. The store has also donated generously to local causes while Guy volunteers with various organizations. And, each holiday, sister Pam Cisneros helps put out the flags along Adams Avenue.

Kensington Video has appeared on film in its own right and was featured in episodes of Stu Segall’s Renegade and Veronica Mars. The store is also visited by fame from time to time as movie stars such as Joan Allen, Carl Weathers, Luke Askew drop by to visit.

Today, Kensington Video is going strong and Guy has no plans to retire. With over 65, 000 titles in stock, somebody has to stand at the counter to answer questions.

Nothing New Under The Sun: The Eternal Life of Jeff Buckley

All You Need is Love: The Story of Popular Music