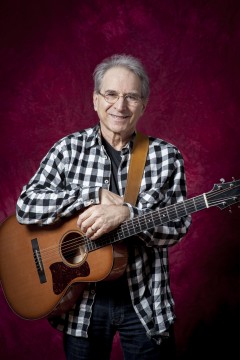 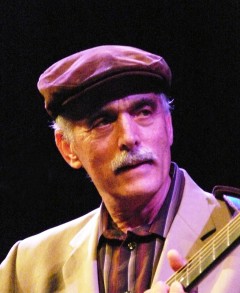 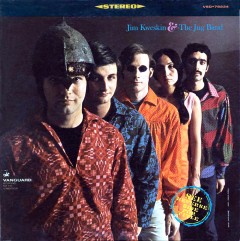 Jim Kweskin & the Jug Band back in the day.

Seldom do you get to talk about two musicians who carry between them over one hundred years of music legacy. Happy Traum and Jim Kweskin are those guys, and they are vibrant gentlemen who continue to expand their artistic output with the vigor and spirit of their youth. After reading about them here, you will likely want to see and hear them in Encinitas on January 30 (with local favorites, the G Burns Jug Band!), buy their new albums, and maybe partake of a guitar workshop or two.

Happy Traum
Back in the late 1950s when Mick and Keith were just two guys who knew each other from school, when John and Paul were auditioning an enthusiastic youngster named George, when Bobby Zimmerman was playing high school auditoriums in Minnesota, Happy Traum was refining his country blues guitar chops under the tutelage of the legendary Brownie McGhee. Within five years, Happy had established himself as a mainstay of New York’s Greenwich Village folk revival scene. His first recording was on a compilation featuring Pete Seeger, Phil Ochs, and Bob Dylan. Happy’s band, the New World Singers, was the first to record Dylan’s “Blowin’ in the Wind,” though it was Peter, Paul and Mary’s #2-selling version that helped launch Dylan’s career.

A year before Woodstock made national news as a place of “Peace and Music,” Happy joined other artists and musicians in making their home in that upstate New York locale. He retains his home base there, showing his good sense by sometimes wintering in San Diego County.

In the late 1960s, Happy edited Sing Out!, a magazine closely associated with Pete Seeger that was responsible for the first publication of Woody Guthrie’s “This Land is Your Land.” During this time, under the management of Albert Grossman, Happy and his brother Artie Traum released their debut album as a duo on Capitol records. This collaboration would endure until Artie’s death in 2008. Happy got his introduction to San Diego Folk Heritage through local folk musician Marty Katz, who has been a fan since he saw Happy and Artie open for The Band in Central Park in 1971.

Happy is a master of the alternating bass finger-picked guitar. Using a thumb pick, but not finger picks, his thumb keeps the rhythm by hitting two alternating bass notes on the fourth, fifth, or sixth strings. The lower note is generally the tonic of the chord, and the upper note either a fifth or an octave above. He uses mostly standard tunings, though he has said that dropped D tuning is his favorite. (This tuning provides a nice open D-A-D or tonic-fifth-octave in the bass strings.) While the thumb provides a steady bass rhythm on the downbeat, the fingers of the right hand pick out melody, chords, and counterpoint, plucked sometimes simultaneously with the thumb, but often on the upbeat, which supplies a bouncy syncopation.

Guitar picking, like cooking and sex, is not a skill you want to learn by reading about it. You can find some great clips of Happy and his guitar on YouTube. Happy is an engaging and clear instructor, and set up “Homespun Tapes” to help folks learn his style of playing. In fact, Homespun boasts a staggering stable of instructors including BÃ©la Fleck, Bill Monroe, Chet Atkins, Chris Thile, Donald Fagan, Doc Watson, Dr. John, Steve Earle, and many more.

In addition, Happy offers workshops, including one that was sponsored by the Poway Folk Circle last year. Workshop organizer Jeff Bertino says the workshop was “outstanding; very accessible and very cool.” This year’s workshop info may be found on the PFC and Folk Heritage web sites. If that’s not enough for you, you can get multiple days of Happy, with Chris Smither and Jorma Kaukonen, at their May 2016 intermediate fingerpicking camp at Jorma’s Fur Peace Ranch in Ohio.

But wait — there’s more! Happy is also an accomplished songwriter. His “Golden Bird” was given a haunting performance on Levon Helm’s final studio album, Electric Dirt, sounding like it could have grown out of the mountain dirt itself. This album was the first to win a Grammy in the Americana category.

Jim Kweskin
Jim Kweskin is the name most closely associated with jug bands during the post-WWII era. Jim Kweskin and the Jug Band were an integral component of the ’60s folk revival, releasing eight albums in from their Boston home base. Other ’60s jug band luminaries include John Sebastian, Geoff and Maria Muldaur, and Jerry Garcia/Bob Weir/Pigpen (the latter as part of Mother McCree’s Uptown Jug Champions). Jim has put out numerous albums over the years, sometimes revisiting and sometimes extending from his jug band roots.

The heyday of jug bands took place in the 1920s and ’30s, when groups of southern musicians formed (unamplified, of course) bands using whatever store-bought, home-made, or found instruments were on hand. The objective was to play loud and lively, incorporating ragtime, blues, jazz, old-time, and vaudeville styles. Instrumentation might include guitar or banjo for rhythm, fiddle or kazoo for melodies, washboard or spoons for rhythm, and a washtub or jug for bass.

Jim, the Muldaurs, and Bill Keith are not the only Jug Band alumni of note. Before he passed away in Portland ten years ago, Fritz Richmond was musically associated with Jackson Browne, Ry Cooder, and the Grateful Dead, and, as studio engineer, with the Doors and the Everly Brothers. Bob Siggins, the Jug Band’s initial banjo player, has lived in San Diego since the 1970s, putting his PhD to good use in the local biomedical community, and his musical chops to use with several groups including East of Echo and Paul Horn’s Cheeky Monkey Band. He fondly recalls pulling large “hootenanny” crowds in and around Cambridge with Kweskin and company. He also recounts the romantic life of the ’60s recording artist. “We had to sleep in the New York Vanguard studio for several days while we were recording the first album; we were so grubby by the end of the sessions, that by the time the photo was taken for the album cover, we all looked totally greasy and wasted.”

Together Again
Happy and Jim have two shows scheduled in 2016: one with San Diego Folk Heritage in Encinitas on January 30 and the other at Coffee Gallery Backstage in Alta Dena February 6. This is a brief reprise of a Kweskin/Traum 2015 tour. “We played together informally at parties for many years and had always enjoyed it. Jim got the idea in 2014 to put a tour together, so we quickly booked seven or eight gigs in the Northeast and it was very successful.” Asked if they have more shows in the works, Happy answers, “We’ll consider all offers!”

“Keeping the music fresh is a combination of loving the material (much of which is timeless anyway) with a natural enjoyment of playing for people and entertaining them,” Happy and Jim stated in a joint written interview response. “This is what we know how to do best, and it never gets old for us. And we keep adding songs to our repertoire. Learning new/old songs is a great way to challenge ourselves and keep it fresh.” For example, the duo updated the 1920s jazz standard “Sweet Sue, Just You,” played as an upbeat rollick on the debut Jug Band album, to a more leisurely love ballad on last year’s circuit.

When asked about classic folk artists, they answered, “The late Derroll Adams comes immediately to mind. He traveled with Ramblin’ Jack Elliott for several years and landed in Europe, where he stayed, so he’s not as well known. There’s a recent release of a ’70s era live show that’s terrific. And then there are the greats, who should always be revisited: Lead Belly, Big Bill Broonzy, Sister Rosetta Tharpe, Memphis Minnie… the list is endless.” One of Jim’s favorite musicians is the Bahamian guitar player, Joseph Spence; he considers Spence’s 1959 Folkways album, Music of the Bahamas Volume One: Bahamian Folk Guitar, one of the great albums of the 20th century.

Jim and Happy also keep their ears open to new music. “There are many young musicians all over the country who have schooled themselves in traditional roots music and incorporate it into their songs and styles. This can take the form of old time, country, rock, blues, jug band or folk, and mostly it’s a combination of all of it. There is so much good music now that’s easily available that it serves to inspire younger players who are looking for those kinds of connections. You can see and hear many of these at events like the annual Folk Alliance conventions and festivals.”

Happy’s current favorites are Woodstock-based artists like Amy Helm, Mike Merenda and Ruthy Ungar, Liz Mitchell, Larry Campbell and Teresa Williams, and national acts such as the Punch Brothers and I’m With Her. Jim says that everywhere he goes he runs into great young musicians, many of whom he asks to get up on stage with him. Lately he has been performing and recording with Meredith Axelrod, a very talented young singer/musician. He has also performed several shows with Juli Crockett, “an excellent singer and songwriter” and her band the Evangenitals.

New Albums
Each of these gentlemen has been busy with new album projects. Happy is promoting his new CD, Just for the Love of It. “The songs in this collection are either old and traditional, or have been composed in that style by writers with deep connections to what is now called American Roots Music. This is the kind of material I have always been attracted to, and these are songs that I have known and loved for most of my increasingly long life. My idea for this recording was to play and sing live in the studio, to try and capture that wonderful interaction that happens spontaneously with musical friends. For the most part the music on this CD reflects the way it happened in the moment–no frills and as honest as I could make it.” Players including John Sebastian, Larry Campbell and Happy’s son Adam Traum contribute to classics such as “Careless Love,” “Church Street Blues,” and “I Ain’t Got No Home.” The recordings are tight and full of energy and have been getting great response from the folk community.

Happy has also put together a show, debuting this spring, called “Coming of Age in the Folk Revival,” complete with archival photos, sound clips, and plenty of good stories from the ‘60s Greenwich Village scene.

Jim released two CDs in 2015. In the 21st Century came out on the Kingswood label and includes 20 songs. This album provides a great intro to Jim’s work, featuring new arrangements of some of his classic repertoire (“Blues in the Bottle,” “Blues My Naughty Sweetie Gives to Me”) and putting the Kweskin stamp on some songs he’s not usually associated with (“Lazy Bones,” “Ain’t She Sweet”).

Jim’s second 2015 release is Come On In, which was recorded with Meredith Axelrod live at McCabe’s Guitar Shop in Santa Monica. These performances feature bass and fiddle, with Jim playing banjo as well as guitar, and Meredith doing a pretty fair impression of a trumpet on the title track. Jim has also been invited to go to England in February to record an album by the folks who run the Hornbeam record label.

There will be a special pre-show by the G Burns Jug Band, winner of San Diego Music Awards Best 2015 Local Recording and recent Troubadour cover artists. (The Troubadour article from September 2015 gives a nice history of jug band music.) Echoing Jim Kweskin, G Burn’s frontman Clinton Davis says, “I find a vitality and joy in the intensity of this music. There’s a depth of feeling that makes playing it very rewarding.”

David Bowie–Musings from Outside the Circle: The Singer-Songwriter Years, 1967-1973