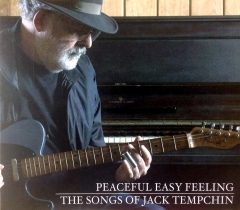 The last time I caught up with Jack Tempchin, he was going solo, leaving the band at home to explore the singer-songwriter inside the singer-songwriter. Now Jack is back with his band and a bunch of great musicians. This is his third album for Blue Elan Records. “After two albums of original music, they wanted a Greatest Hits.” And it is certainly the definitive Greatest Hits for the new millennium: the Jack Tempchin classics newly recorded. Three guest artists from Blue Elan partake: Rita Coolidge, Herb Pedersen, Janiva Magness, plus longtime friend Chris Hillman. “Peaceful Easy Feeling” is played full-band, country-rock style, similar to the Eagles’ original cover, while retaining Jack’s distinctive flavor. Its pop hooks could easily propel it up the charts. The ever soulful “Slow Dancing” captures both the original Johnny Rivers’ vibe while pushing the musical chemistry between Jack and co-vocalist Rita Coolidge. The previously-unreleased “Privacy” is a rocker with an infectious shout-chorus that should go well at any beer bust or college house party. The song carries a strong political underpinning as well, telling the government and corporate America to stay out of our private lives. Except for “Slow Dancing,” every song on the album was either co-written or sung by the late Glenn Frey. And if that wasn’t enough, the album includes “Already Gone,” “Everybody’s Gonna Love Somebody Tonight,” “Part of Me, Part of You,” “The One You Love,” “Soul Searchin’,” “Party Town,” and “It’s Your World Now.” Jack has been social media-friendly for some time. A few years back, he was doing a song a day in which he wrote and posted a new song online every day. Now he’s shooting and posting lots of videos of his music to Facebook. He shot a couple at La Paloma Theater in Encinitas directed by top Nashville music video director Jim Shea. These include “Slow Dancing” with Rita Coolidge. Jack has also been recording “Facebook Live” sets inside his Lincoln Towncar. (Whereas James Cordon does car karaoke, Jack is performing live sets inside his car, parked at Encinitas Beach “every Wednesday or whenever I feel like it.”) These three-song sets capture Jack in a live setting with his beloved Encinitas and the SoCal sun as a backdrop. Jack will continue to post new videos and songs on his Facebook page and YouTube. He’s looking at doing some tour dates, too, in support of the new album. And, finally, he’s dangling the possibility of a new project with longtime friends Herb Pedersen (Desert Rose Band) and fellow San Diegan Chris Hillman (Byrds, Flying Burrito Brothers). So don’t expect the songwriter of “Slow Dancing” to be slowing down any time soon.