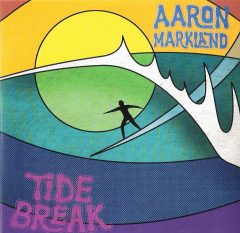 Ocean Beach native Aaron Markland got his musical start with a hardcore punk band in high school, and after a solo project joined with his brother and dad in the hard rock band Markland, recording a 2014 album. That project got his music radio and documentary film exposure, and now he has recorded a new solo disc, Tide Break. Produced by Markland and New Mexico’s John Wall, the album features his vocals and guitar, supported for the most part by brother Justin (bass), Karl Zink (keys), and Tim Archuleta (drums/percussion). Markland’s 10 originals are a hodgepodge of elements, including power reggae, grunge, and soft beach rock, with most of the songs starting on an acoustic guitar foundation, and lyrically dealing with the sun and surf life.

The title track opens with a reggae guitar/keyboard riff, and words about hitting the waves, feared by some when “All we need to do is embrace the day.” “Ocean View” doesn’t vary the message much, celebrating the OB lifestyle to an acoustic guitar stutter step beat, as Markland raps off a list of his favorite past times: sampling microbrews, surfing all day, and playing tunes for friends. For his “Candy Cane,” Markland sings about his “brown skinned girl” with great physical attributes. He also adds “shooby-dos,” nearly mirrors Steve Miller’s “Quicksilver Girl” on the bridge, then mixes it all together in the final verses-without resulting chaos.

Things get heavier in “Burn It Out.” It features two cranked electric guitars and a fairly catchy hook, with a grunge vibe as Markland plows through lyrics about “The night has turned the day into a purple haze/ Better to burn it out than to fade away.” The ideas aren’t new, but he sounds like he has heard a Pearl Jam album or two and means business. “Side by Side” tries a sort of power ballad, slower but with big buildups, with Markland reassuring a love interest that he will be there, if she will take his hand. The tune works, but is frankly too long and overproduced, as the last couple of minutes of layered guitars, loud Hammond organ, and buried vocals are probably too much of a good thing.

Markland likes to write songs about seasons, and “Never Ending Summer” recalls an idyllic time at the beach and the girl he shared it with, an easy assignment-but he does it with a catchy melody that includes striking harmonies that help this highlight. “Her Name was Winter” is also backed with acoustic guitars and sung in harmonies, but bad news this time: “She was a raincloud when I needed sunshine.” The album closes with a catchy anthem about California beach life, “Sea to Sky”: “Never knock it till you’ve tried California,” as he pledges to breathe in the good vibes.

Tide Break is a very good effort by Aaron Markland, especially since he is establishing an identity and a sound of his own. Fans of surf and beach oriented music, and those who enjoy well-crafted alternative rock will enjoy it.