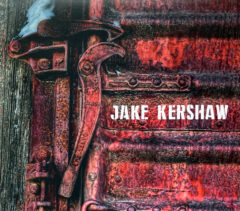 Jake Kershaw, remember the name. The self-titled debut album from this 21-year-old guitarist and singer/songwriter will knock your socks off.
Kershaw, who hails from Albion, Michigan, is not only a dynamic electric guitarist, but also a super soulful singer, a combination that usually elevates a musical artist to top billing. Three years in the making, the album was beautifully recorded and mixed by Kevin Kozel at Third Coast Recording Co. in Grand Haven, Michigan, with producer Bill Chrysler at the helm.
Eleven tracks in all, nine originals, make an immediate impact with Kershaw’s powerful lead vocals, bolstered by tightly harmonized overdubbed vocal choruses, tasteful guitar phrases where he never overplays, combined with well thought-out chordal arrangements to complement his lyrics, all nicely supported by drummer Scott Pellegrom throughout.
The pop-flavored opener, “Lose My Mind,” gives an immediate hint that there are going to be many radio friendly format arrangements ahead. The two rockers, “Stay on the Line” and “Don’t Feel It Anymore,” leave no doubt about Kershaw’s guitar prowess in effortlessly executing blistering rock guitar solos much in the mold of ’70s and ’80s guitarists Van Halen, Don Felder, and Tom Scholz. Another rocker, “Never Not Gonna Love You,” is augmented by some nice honkytonk piano phrases from Dutcher Snedeker, who also shines on piano on “Trip in my Mind,” a gospel-flavored ballad with Kershaw exhibiting his fluid major pentatonic scale and double stop phrases, equally fluid as well in the same vane on “In Case You Were Wondering.”
Kershaw takes a 180 degree turn on the Chet Atkins/Jerry Reed flatpicking tune, “Jerry’s Breakdown,” in which he nails all the hot up-tempo licks note for note. Dana Robbins joins the party for the funky Ashford/Simpson classic, “I Don’t Need No Doctor,” where she tears it up on her 16-bar tenor saxophone solo, followed by Kershaw erupting into a frenetic ending solo, employing licks Jimi Hendrix and Eric Johnson would be proud of.
Kershaw accompanies himself on acoustic guitar for the catchy tune “California” as well as the closing track, “I Will Go My Way,” which segues into a blaze of fiery electric guitar licks, putting his final thumb print on a masterful debut album with much to look forward to from Kershaw in the future.

NENA ANDERSON: Beyond the Lights