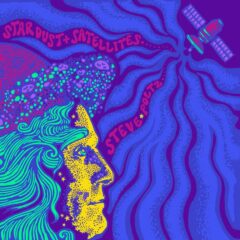 It’s hard to believe Steve Poltz is now 62. He still sits in the mind as the young, 30-something smart-aleck leading the Rugburns at Winston’s in O.B.
But here we are, 30-plus years on, with his 15th (or 16th, or 17th, depending on how you’re counting them) solo album, in addition to his Rugburns stuff and other assorted side projects.
Stardust and Satellites is a stylistic grab bag, with Poltz dipping into genres ranging from straight-ahead acoustic folk to country, gospel to Beatles-esque pop. What are consistent—what have always been consistent—are the syncopated acoustic guitar lines and the gorgeous vocal harmonies that are his hallmarks.
The first single issued from the album, “Can o’ Pop” finds a funky, world-beat vibe drawing equally on Little Feat, Grateful Dead, and Jimmy Buffett. It’s a nice bit of ’70s folk rock percolating atop a Caribbean rhythm. The melody has a great hook, the lyrics are pretty straightforward for a Poltz song, and the arrangement is both polished and interesting. This would be a hit if they still had, you know, hit records.
The lead song on the album, “Wrong Town,” is a prototypical autobiographical Poltz song—just acoustic guitar and vocals, with a stylized opening figure on guitar. In the lyrics, he attributes his style as “Emmylou Harris mixed with a little Don Was.” But there’s a touch of Joel Rafael to his vocals, too—particularly in the meter of his phrasing on this tune.
“Conveyer Belt,” the second track, is a song that could only come from someone who’s got more years behind him than ahead:
We are all on a conveyer belt
In a factory on the wheel of time
Yeah, we don’t know when our cart clocks out
It was yesterday we were in our prime
“Frenemy” may well be the first song to feature “Shostakovich” in the lyrics (and make it rhyme!) and surely the first with both that, Sophocles, Euripedes, and Baryshnikov. More impressively, the clever word play works organically in telling the story.
Poltz dips a bit into southern gospel on “Lord Savior,” which may have the best hook of any song found on this release. What it lacks in theological cohesion it makes up for in some of the most high-spirited playing on any Poltz outing.
“Miles in My Heart” has a McCartney flavor—not only in the jangly pop arrangement, but also in the way utterly different passages are structured together in a way that creates contrast rather than discord. It is, musically, one of the most interesting songs Poltz has yet written.
The album closes out with the title track, another acoustic autobiographical song not so different from the opening song – with equally poetic lyrics:
We’re all made of moving parts
And broken hearts
And we’re all just floating
While the 10 songs on this new album create a varied musical landscape, the philosophical heart of the album comes about halfway through the opening tune, when he admits, “But mostly I’m just here to sing for you.”
Given his talent both at writing and performing, that’s more than enough. We’re blessed to have him.