February 2023
Vol. 22, No. 5
If Music Be the Food of Love, Play On: Dually Noted Pairs Fine Food and Fine Music by Paul HomiczJanuary 2023
Jeff Beck: A Tribute by Ted BurkeJanuary 2023
Marcus Petronius Bashore: The Best Seat in the House by T.E. MattoxJanuary 2023
Pacific Wave: A Surfin’ Safari January 2023
The Winter Dance Party 1959: The Night the Music Lived by Terry RolandJanuary 2023
Back with a Bang! Java Joe's Reunion at San Diego Folk Heritage by J.T. MoringJanuary 2023
Book Review: The Philosophy of Modern Song by Bob Dylan by Ted BurkeJanuary 2023
Rick Nash: Bass Man in Demand by Wayne RikerJanuary 2023
Mod Revivalists the Trebels to Reunite for 40th Anniversary Show by Jim TrageserJanuary 2023
Harold in the Land of Jazz by Bart MendozaJanuary 2023
Advertisements 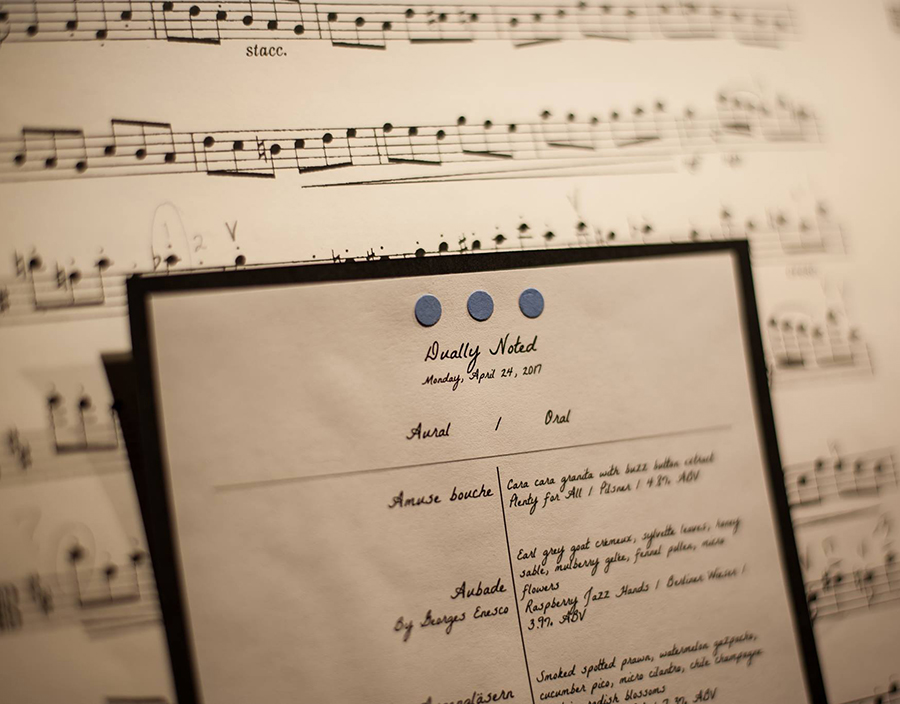 In the shade of a magnolia tree, just as the first course is served, a peach and brie vol-au-vent, the strains of a quartet make their way among the tables and diners. The mid 20th century bassoon piece is lively and fun. And the same can be said of the pastry dish. A finger food, it’s savory and at the same time tart, a lively and fun morsel. I have just been introduced to Dually Noted, which is synergizing music and dining into a new experience.

Rebecca Matayoshi established Dually Noted three years ago as a way to create a dining experience in which all the courses are prepared to perfectly complement the music of the evening. “I like food, and I love music,” she says. “This was a way that I could engage my passions,”

To create a Dually Noted event, Matayoshi, a violist with the Hawaii Symphony and an acting section violist with the San Diego Symphony, works with a classical musician, who chooses a musical program. The music is then presented to a chef, who creates a meal to reflect the feelings and mood of the pieces chosen for the evening. 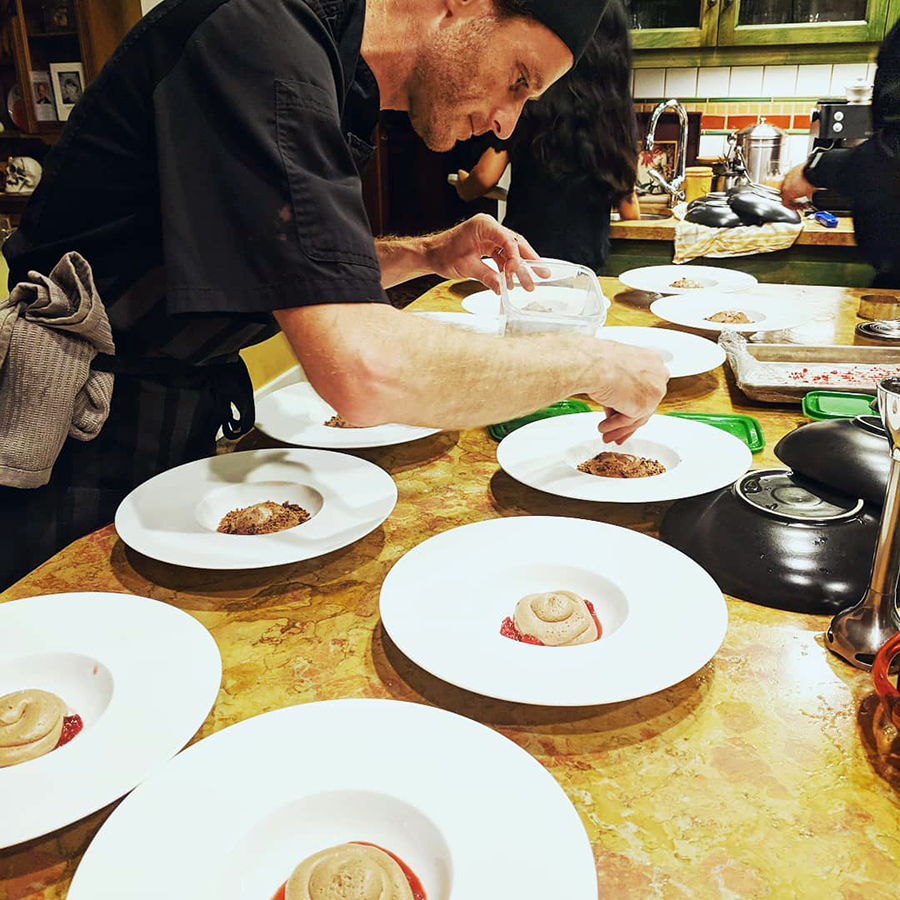 This evening, during the main course, the music is for bassoon and prerecorded tape, a piece quite modern and worthy of serious listening. The music zigs and zags and so does the food. Tonight’s chef, Yara Lamers, says, “Tonight’s theme is American summer, so I chose something very American, chicken and gravy, but there were twists and turns with the music, so I threw in some twists and turns with the food. I thought, ‘How can I make you feel a surprise with the food?’ I wanted a familiar American feel but a new America as well.”

Matayoshi emphasizes the creativity of each Dually Noted event. “A chef may train for years, going to culinary school, working as a sous chef, and wind up working in a restaurant where the menu is already set. Musicians train for years, go to conservatory, and, as symphony players, don’t chose what they play. This is a chance for musicians to choose the music that they play. And it’s similar with the chefs that we work with.”

Diners at a Dually Noted event.

Dually Noted occurs every other month, with the possibility of the event occurring more often. The events are always on a Monday in a house concert setting. Tickets and seats are also available for those who want to listen to the music without having dinner. The emphasis is on casual and comfort. Tonight there are plenty of cargo pants and Hawaiian shirts, and there are no high heels.

Photography being one of her passions, Matayoshi takes all of the professional quality photos used on the website for Dually Noted. The Chicago native knew that she wanted to become a musician when she performed a concerto with her youth orchestra and realized the power that music has to move people. “After the performance, some people told me that they cried,” she says. She landed her first job with an orchestra performing in Osaka, Japan. “The experience helped to show me who I was,” she says.  “Here, I’m seen as Asian. There, I was seen as an American.” 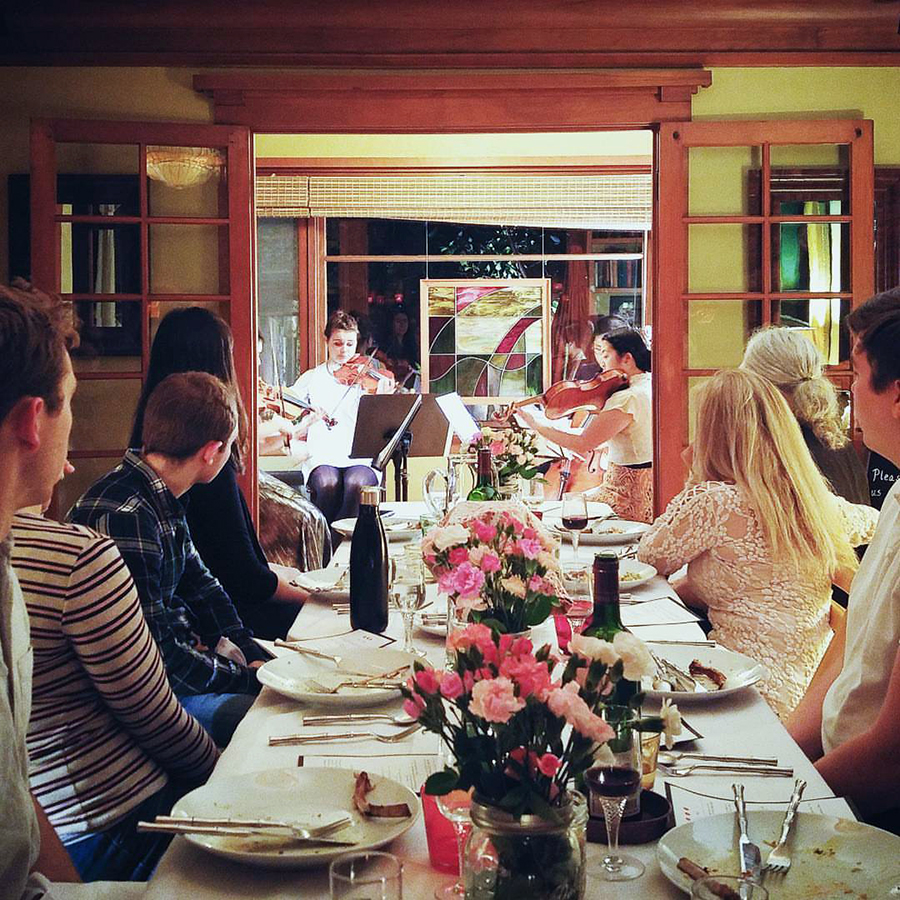 Diners enjoying the fine food and listening to the music.

Matayoshi says that folks can expect more than great food and music if they attend a Dually Noted event, saying that “they will be immersed in a unique social and sensory experience, meeting people they may have never crossed paths with, and absorbing music and food at the highest level. Whether they are familiar with the music and food is less relevant, it’s the manner of presentation that makes it special and memorable.”

After almost three years of a pandemic imposed hiatus, Dually Noted has resumed their unique concert/dining experiences. While founder and manager Rebecca Matayoshi admits that things were a bit rough with the pandemic shutting down, there were some up sides to her experience over the last three years. “I took advantage of new-found time on my hands,” she says. “My husband and I learned how to cook a lot of things from scratch, and we spent a lot of quality time together.” 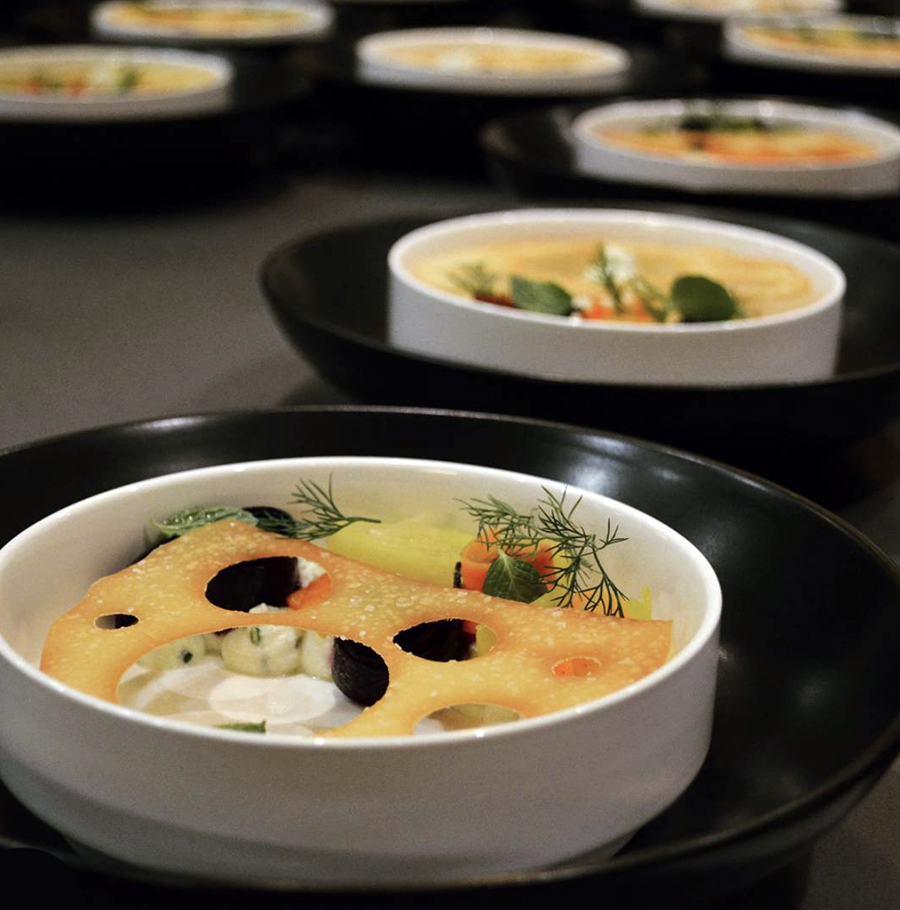 This month Dually Noted is launching their collaboration series. These are partnerships with other local nonprofits, using the dining/music template of Dually Noted as fundraising opportunities for other local nonprofits. The first will be on the 30th of this month with the Symphony Notables, a woman-run nonprofit that is the learning and engagement department of the San Diego Symphony. Symphony Notables perform outreach by bringing underserved communities into the concert hall or exposing children to classical music in schools. Matayoshi says that she wants these partnerships to include nonprofits that are outside the arts community, such as science and education organizations. “I always wanted Dually Noted to be a community-centered event that gives back to the community,” she says.

For further information and tickets, go to: duallynoted.org