February 2023
Vol. 22, No. 5
Rick Nash: Bass Man in Demand by Wayne RikerJanuary 2023
Jeff Beck: A Tribute by Ted BurkeJanuary 2023
Marcus Petronius Bashore: The Best Seat in the House by T.E. MattoxJanuary 2023
Pacific Wave: A Surfin’ Safari January 2023
The Winter Dance Party 1959: The Night the Music Lived by Terry RolandJanuary 2023
Back with a Bang! Java Joe's Reunion at San Diego Folk Heritage by J.T. MoringJanuary 2023
Book Review: The Philosophy of Modern Song by Bob Dylan by Ted BurkeJanuary 2023
Mod Revivalists the Trebels to Reunite for 40th Anniversary Show by Jim TrageserJanuary 2023
If Music Be the Food of Love, Play On: Dually Noted Pairs Fine Food and Fine Music by Paul HomiczJanuary 2023
Harold in the Land of Jazz by Bart MendozaJanuary 2023
Advertisements 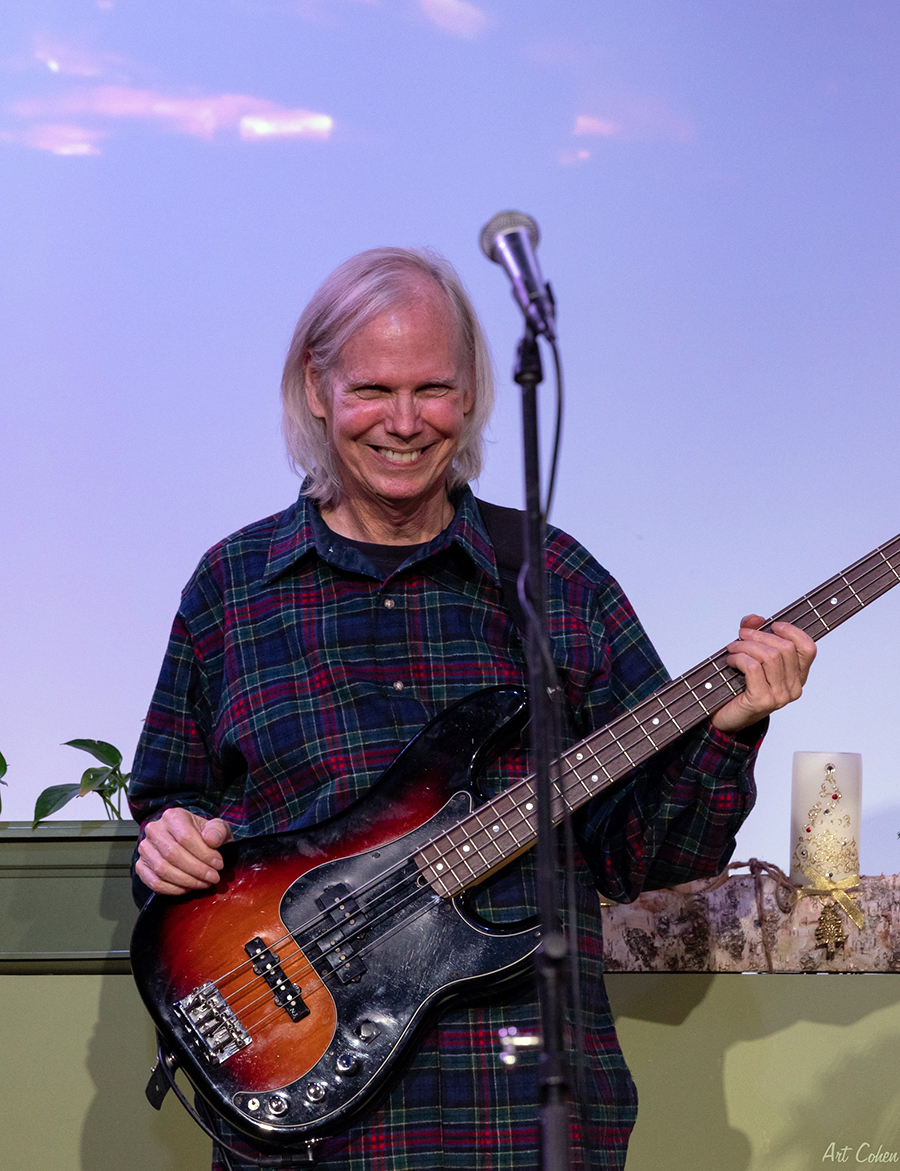 There aren’t many active bass players that come to mind that stand front and center on stage other than, perhaps, Paul McCartney and Sting. Most are hidden in the shadows behind ostentatious guitarists and singers, while they anonymously hold down the bottom end of the rhythm section. Locally, one of those would be the ever-present electric bassist Rick Nash, who performs with a plethora of eclectic bands, live and in studio, throughout San Diego County and beyond.

Nash was born in Long Beach, California in 1953, followed by a move to Washington D.C. before his family moved to Coronado Island when he was five. “My family was a Navy family. Dad was a Navy captain and my mom was a Navy wife,” he recounted. “Early on my parents didn’t want me to become a musician, but they supported my decision anyway.” 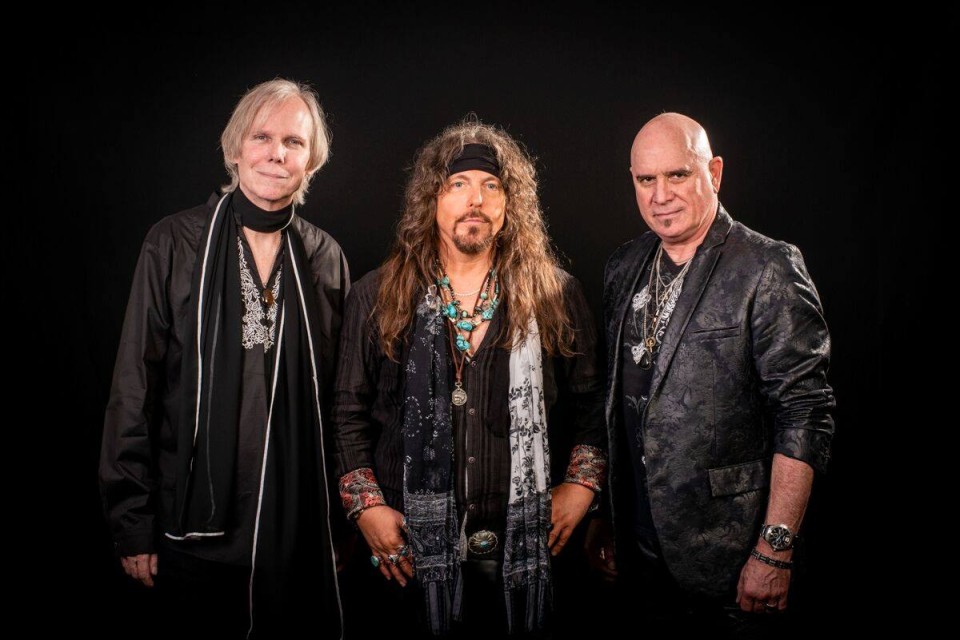 Nash with the Brett Ellis Band.

He played the clarinet in junior high and soon discovered that he loved playing music, but just not on the clarinet as he recalls. “For a little while I thought about playing the drums, but my parents put a quick end to that, saying ‘we don’t want a set of drums in this house!’ I then decided to try playing bass guitar,” he continued. “Little did my parents know that eventually their garage would be turned into a band rehearsal space/clubhouse.” he quipped.

A couple of other Coronado musical icons—guitarists Joey Harris and Billy Thompson—were both contemporaries of Nash during his early playing years. “Growing up there I was able to watch Joey Harris blossom into the total badass rocker that he became,” Nash exclaimed. In the case of Thompson, Nash vividly recalled a precise moment: “Hangin’ out with my first real band, Golden Armor, we went to a party where Thompson was singing and jamming on the harp. We immediately recognized his talent and asked him to join our band. He did! I was able to watch him work his ass off to become the great guitar player he is today…I’m proud to know them and love them both!”

One of Nash’s first established bands in the mid-1970s was Charisma, an eight-piece horn band. “We played Navy bases and high school proms all around San Diego,” he reminisced. “We then toured the U.S. and Canada as Magic Carpet, eventually morphing into a show band with the addition of three singers and changing our name to Awakening; we were on the road for four years playing five nights a week.” After that, Nash’s steady employment continued as a member of the the Dead End Kids, a twin lead guitar hard rock group, featuring local guitar hero Thom Beebe, followed by joining the show band New Feeling. 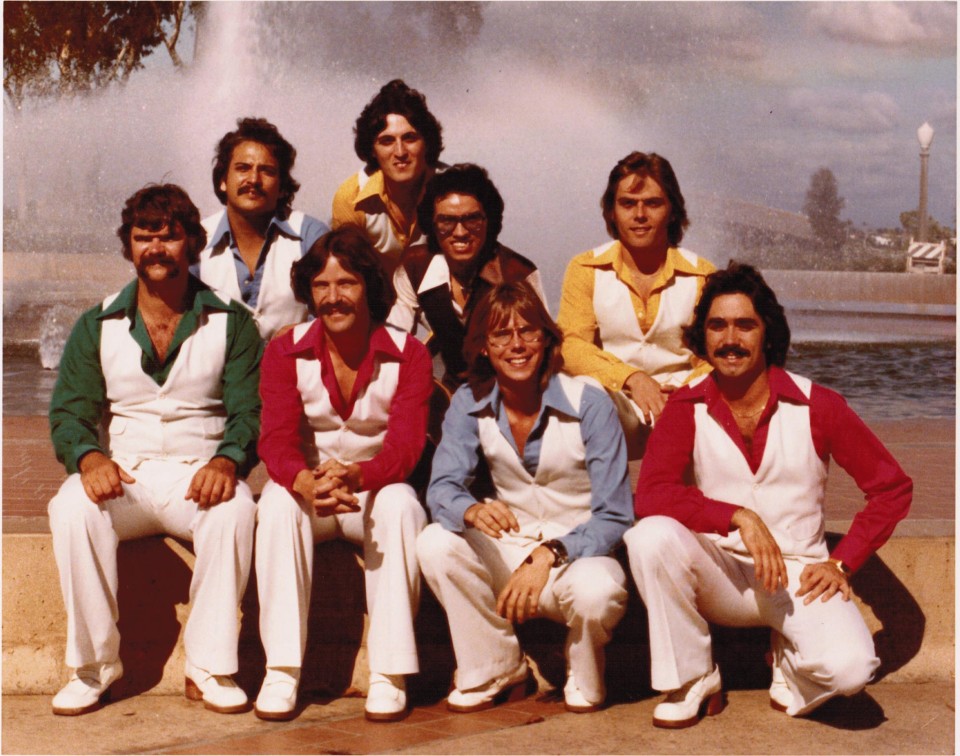 Although Nash never took any lessons locally, like many during those early times, he learned by ear while gaining experience gigging in clubs for years before he decided to expand his musical horizons with his enrollment at the prestigious Musicians Institute in Los Angeles for their 1984 summer session. “Up until then I had been playing by ear. I loved it so much there that I stayed for the full year,” he explained. “While there, I made myself available to anyone that needed a bass player. Playing with all those musicians reminded me of why I started playing music in the first place… I got to hang out often with bass instructor Tim Bogert (Vanilla Fudge, Jeff Beck)…he turned me onto the five-string bass.”
In 1988, the established classic rock bar band, the Siers Brothers, were looking for a bass player as Nash recalled. “I was available, so I joined. I’ve always enjoyed playing with them on and off throughout the years. Currently I’m back playing with them on a regular basis at Tio Leo’s in San Diego every second Friday of the month.”

Bandleader Steve Siers chimed in about his long established musical relationship with Nash. “I don’t think you’ll find any musician in town who would have a bad word to say about Ricky concerning his musical abilities or his personal demeanor… Rick makes everyone play better. I can’t say enough about how he brings stability, excellence and positivity to every gig.” 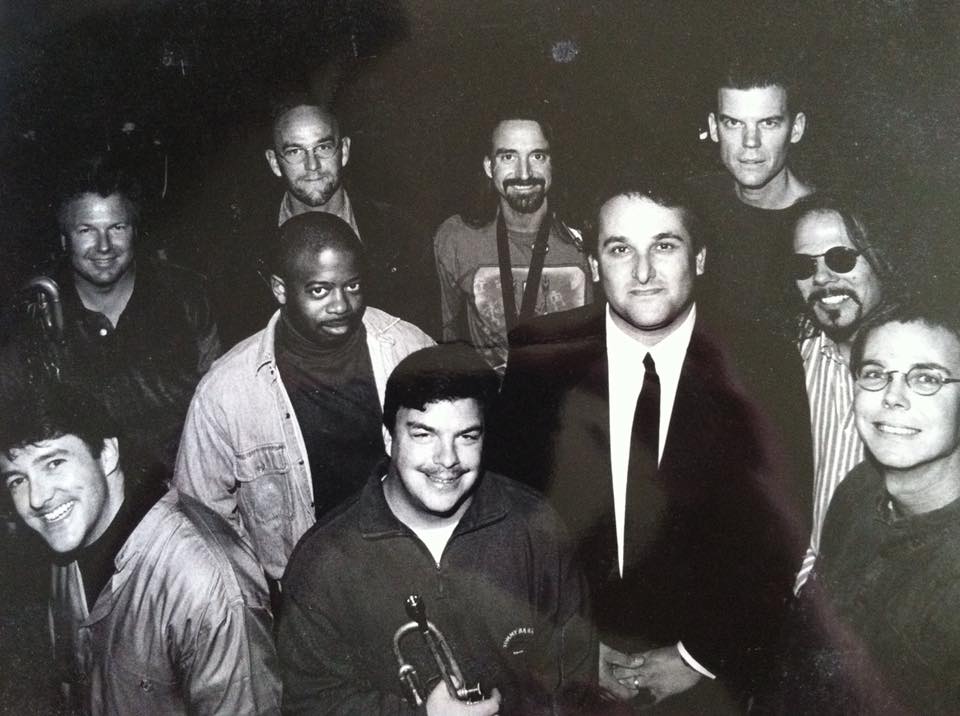 Nash became an original member of the Soul Persuaders, an expansion of the Siers Brothers Band in 1989. “They wanted an additional horn section to do material by Southside Johnny and the Asbury Jukes,” Nash explained. “Many excellent musicians have played in the band over the years. We were retired for a while, but we’re back! We currently play every third Friday at Tio Leo’s.”

In the early ’90s Nash took a couple of 180 degree genre turns when he joined the Afro Pop outfit Burning Bridges, followed by a stint with Robert Vaughn and the Dead River Angels, an original Americana/rock group. In 1994 he did a few local gigs and a West Coast tour with Country Dick’s Garage, which included local icons Country Dick Montana (Dan McLean), Katy Moffat, and Rosie Flores. After that, Nash then joined up with Kings Road, which soon became the very popular Eve Selis Band. 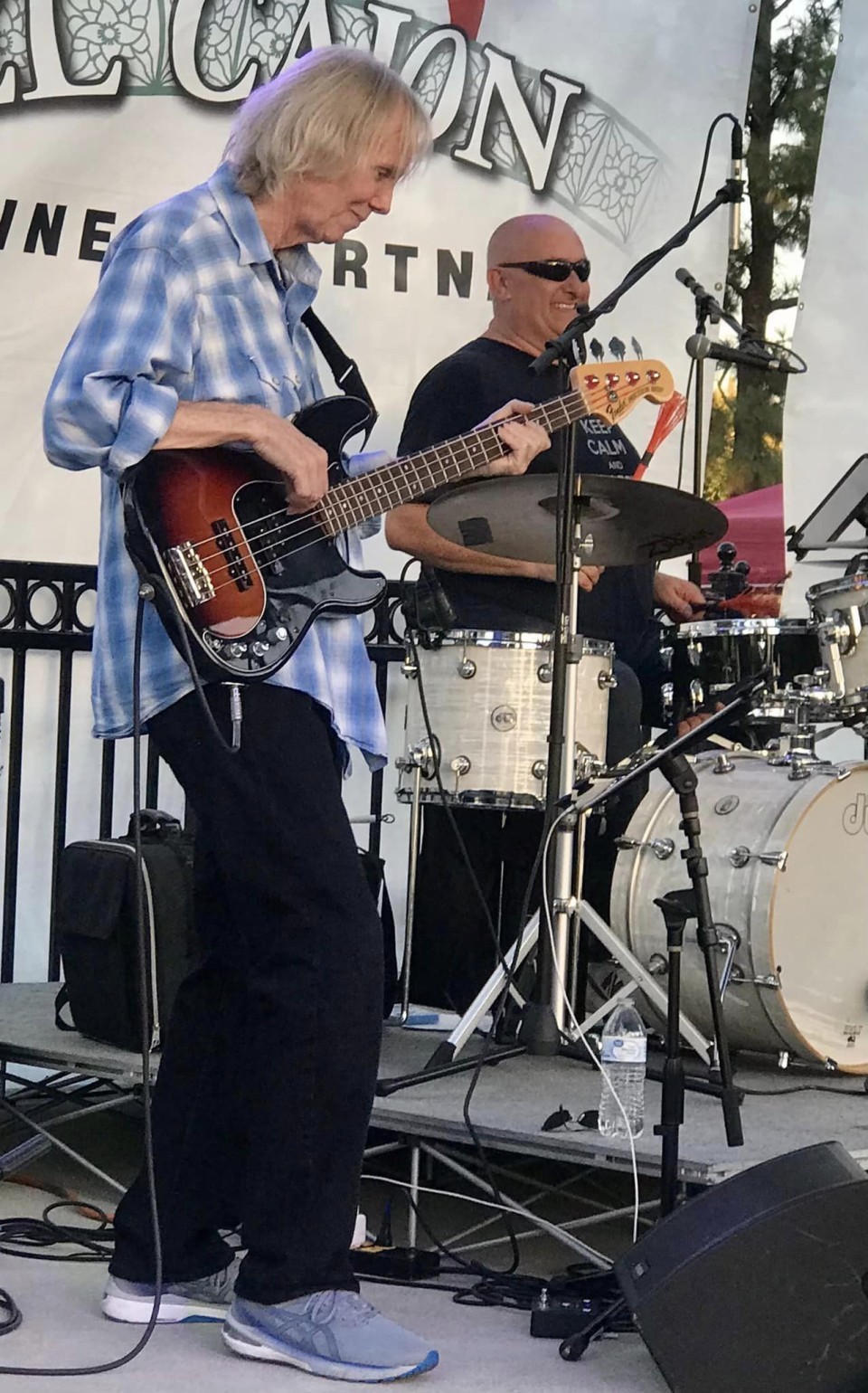 Drummer/vocalist Larry Grano began his working relationship with Nash when Grano joined the Soul Persuaders. Beyond the live performances they both became a first-call studio rhythm section, mainly hired by engineer/producer Alan Sanderson. “We would come to the studio and meet an artist Alan had set for studio time,” Grano explained. “We became their two-man ‘wrecking crew,’ charting and recording the artists songs.

Another great engineer/producer, Jeff Berkley, began to hire us as well,” Grano continued, “to help out with the artists he was booking. Watching Rick make music suggestions in the studio is a lesson unto itself. Most of the time the artist, being almost too close to the material, would listen to Rick’s constructive criticism and like his ideas, which would lead to all the right decisions.”

Nash also splits time with two high visibility rock guitarists’ bands—Jeff Moore & the Witchdoctors and the Brett Ellis Band. “Guitarist Jeff Snider recommended me when Brett was looking for a bass player to record some songs with him and drummer Calvin Lakin,” he said. “We loved playing together from the very start and are currently planning to do some live shows this year. I’ve been playing with Jeff Moore & the Witchdoctors for at least 20 years. I love making music with him.

Unfortunately, we’ve lost a few drummers along the way. Larry Dent was the first drummer I worked with in that band; Gary Nieves was the next. I miss them both. Danny Cambell is our current regular drummer,” he concluded. Nash has also been on board for Moore’s Jimi Hendrix tribute shows. “I’ve been a part of the Hendrix tribute show from the start. I fell in love with Jimi Hendrix the first time I heard him. Jeff Moore plays the shit out of Jimi’s songs as well as all of the guitarists that participate in that show.” Nash has also been the bass backbone for the Back to the Garden band, an aggregation of top flight musicians including guitarists Jim Soldi and Marc Intravaia, keyboardist Sharon Whyte, and Grano, performing themed shows. “I’ve been on board for a few years now,” Nash said. “We call these shows ‘Story Concerts’ with Robert Hughes as our storyteller as we play the music from each notable event or group including Woodstock, the Beatles, Monterey Pop, The Band’s Last Waltz, and the Music of Laurel Canyon, to name a few.”

Recently the band started working with Richie Furay of “Buffalo Springfield” and “Poco” fame. “It’s an honor and a pleasure to work with him,” Nash beamed. “We’re doing our Laurel Canyon show on February 11th at the Poway Performing Arts Center with Richie Furay as our special guest.”

Soldi has been on stage with Nash enough times to witness Nash’s work ethic and musicianship first hand: “I’ve been blessed to work with some of the most amazing players in the business,” Soldi exalted, “and Rick is certainly one of those. He’s way more than just a fine technician, he’s a great musician who takes his craft seriously… Rick has all of the chops but, more important, he has a level of discipline that always honors the song and never gets in the way of the groove… he’s always prepared for every gig and his playing always complements the other players on stage, never getting in the way musically. The greatest joy for me as a guitar player is to play with a rock-solid rhythm section as a foundation, and there are precious few bass players in town who fill that bill.”

Intravaia added his thoughts as well for his bass compadre: “Rick and I started working together in the late’90s and I consider him to be the best in the business. As a songwriter and producer for the Eve Selis band, I would sometimes have to make suggestions regarding a bass line here and there with our previous bassists,” Intravaia stated, “but I’ve never had to make one suggestion to Rick regarding how to play a certain part. His musicianship is intuitive and instinctive; he always makes the best musical choices… and I’d like to add that he is the easiest man on the planet to work with.”

Whyte weighed in as well with her thoughts about working with Nash: “Rick Nash personifies an unsung hero. When he’s on a gig, you know it will be good,” Whyte emphasized. “He always seems to know exactly what to play to make the song work. His musicality, professionalism, and stage presence are unmatched. If you can imagine all the things you’d want in a bass player, the answer to all would be Rick Nash.”

Currently Nash has been as busy as ever as witnessed this past holiday season. “I just finished playing Carols by Candlelight at the Escondido Center For The Performing Arts with the Back to the Garden Band, backing up country music artist Mark Wills, singer/ songwriter Steve Vaus, and Richie Furay… we also performed there with singer Eve Selis for her annual Christmas show.” Nash also played at guitarist Roni Lee’s annual Christmas party as well as a recent stint with the group Jeff Berkley and the Banned.

Nash’s reputation as an all-around skilled bassist and team player is second to none when musical artists of multi-genres need a bass player, duly noted by his rhythm section buddy Grano. “Rick has taken a passion and honed it into an amalgam of great bass work, both live and in studio. His attention to detail and quality of work are world class… and he’s a great friend. To quote from the movie Brian’s Song, ‘I love Rick Nash… I want you to love him, too’!”

Book Review: The Philosophy of Modern Song by Bob Dylan

Mod Revivalists the Trebels to Reunite for 40th Anniversary Show