February 2023
Vol. 22, No. 5
Mod Revivalists the Trebels to Reunite for 40th Anniversary Show by Jim TrageserJanuary 2023
Jeff Beck: A Tribute by Ted BurkeJanuary 2023
Marcus Petronius Bashore: The Best Seat in the House by T.E. MattoxJanuary 2023
Pacific Wave: A Surfin’ Safari January 2023
The Winter Dance Party 1959: The Night the Music Lived by Terry RolandJanuary 2023
Back with a Bang! Java Joe's Reunion at San Diego Folk Heritage by J.T. MoringJanuary 2023
Book Review: The Philosophy of Modern Song by Bob Dylan by Ted BurkeJanuary 2023
Rick Nash: Bass Man in Demand by Wayne RikerJanuary 2023
If Music Be the Food of Love, Play On: Dually Noted Pairs Fine Food and Fine Music by Paul HomiczJanuary 2023
Harold in the Land of Jazz by Bart MendozaJanuary 2023
Advertisements 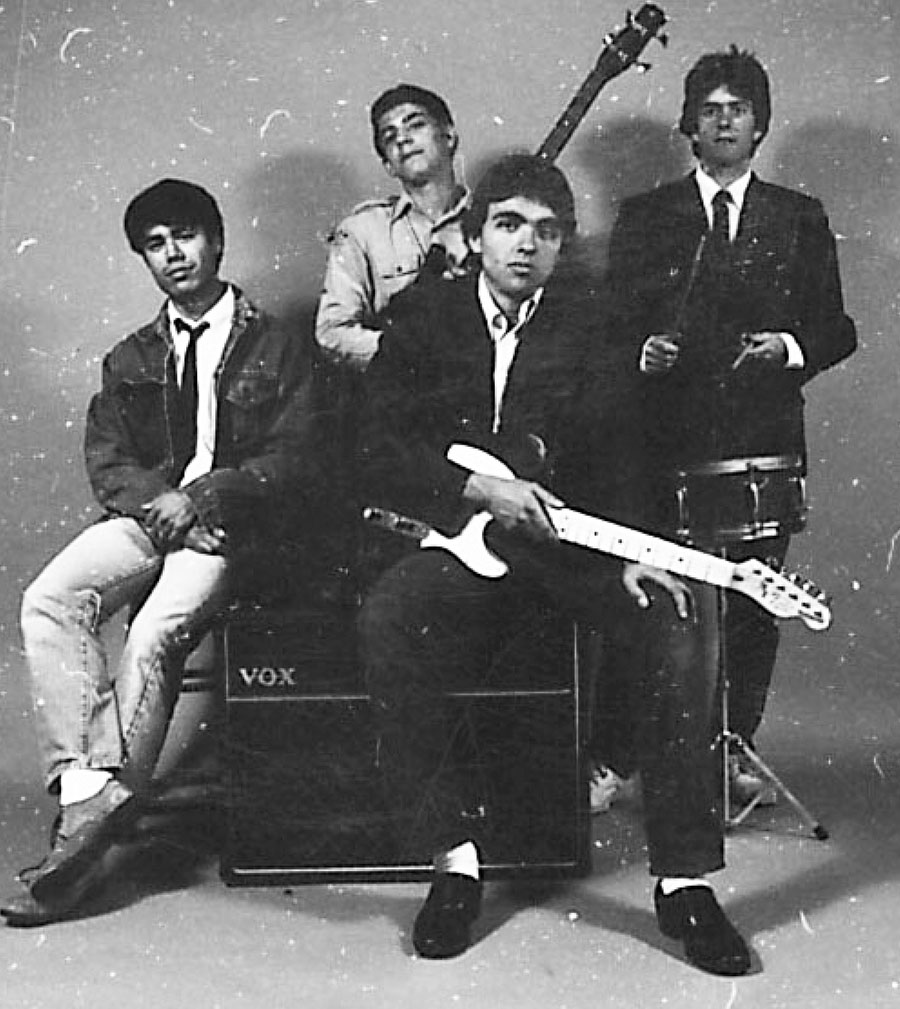 While the 1980s remain best known for the smooth dance-ready synth pop of MTV, other styles were enjoying renaissances: the rockabilly and wider roots revival (Beat Farmers, Paladins, Outriders here in San Diego); a brief, smaller psychedelic revival (Tell Tale Hearts); and, in between, a mod revival (the Shambles).

Generally grouped in with the latter, but also drawing on a strong roots influence, was a quartet out of Imperial Beach called the Trebels.

They released a single 45 (“That’s You”/“That Girl”) in 1989, but were a popular draw around town before life, burgeoning careers, and expanding musical interests on the part of the members led them to dissolve in the early 1990s.

Now scattered across the globe, the band is gathering once again for a January 21 show at the Casbah to mark the 40th anniversary of their start.

Lead singer and harmonica player Jay Wiseman, who is now based in Melbourne, Australia, said in a Zoom interview that the band first started talking about a reunion about four years ago when he and his wife and children were planning a visit to San Diego.

“Then Covid hit right before we were going to leave,” he said.

With bassist Oscar Barajas now living in San Francisco and drummer John Chilson in Oregon, Wiseman said the follow-up planning involved logistics as much as anything. (Guitarist Xavier Anaya is still based in San Diego County.)

“It’s been a long time coming, Wiseman said. “I started planning it in January, then just waited with Covid and bringing the whole family. Then we had to get a joint to host us and get other bands to play.” (Other acts on the bill include The Loons, Alvino & The Dwells, and DJ Tony the Tyger.)

Wiseman said the band will rehearse a little before the show, but that the first rehearsal will be the first time the band has played together in about 30 years.

“I’ve had a few jams with (guitarist) Xavier (Anaya) when I go back to California, but since those other two guys are so far away, it wasn’t feasible.”

But Barajas, who now works as a commercial painter, said in a telephone interview that he doesn’t think the time away will matter once the four are back together.

“I think it’s going to be easy—all these songs I have ingrained in my brain. I’ve been going over some of them, and it just comes out. I think it’s going to be a breeze and I’m really looking forward to it.”
While Wiseman, as the singer—and also the most publicly charismatic of the four—became the frontman and face of the Trebels; he was actually the last member to join.

“I learned guitar from him. At the same time Xavier was learning guitar from his Uncle Chato, who was in the original Trebels, back in the’60s. They had played in the famous Mike’s bar in Tijuana. He was a really good guitar player; he knew all the Beatles songs, all the lead parts.”

Barajas said Anaya lived across the street from him in Imperial Beach, so they had grown up together from childhood.

“We were always into music, and then John was also a friend of ours from elementary school. We decided to start up a band—one of those things kids from suburbia did.”

They were practicing as often as they could but had no singer—and had yet to play an actual show.

Then one day, as Wiseman tells it, kismet intervened.

“I was in another band, just some local friends in the block, and I was actually playing keyboards at the time. We were doing stuff like Deep Purple, the Animals, just whatever we liked. No one sang. It was just kind of put together. We didn’t have a bass player. 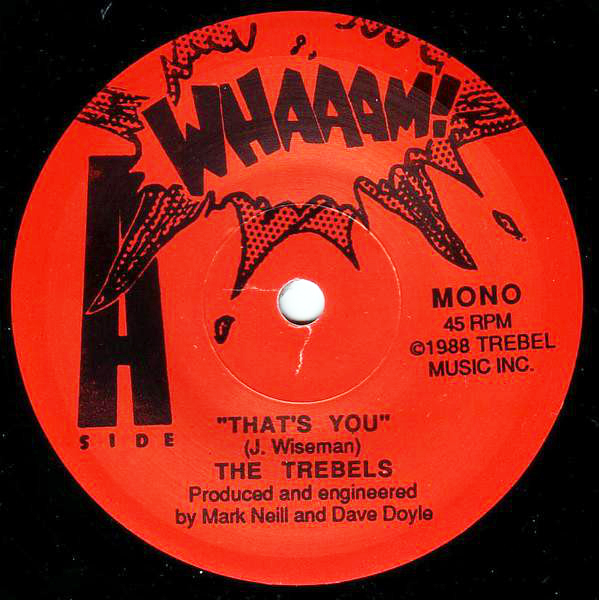 “At one point, we opened up my garage door at my parents’ house and heard another band down the street.

“We drove down and introduced ourselves. I pulled Oscar aside and asked if he was interested and tried to poach him right there! He said, ‘No,’ but he asked, ‘Are you the kid who plays the harmonica?’ I was totally enamored with Keith Relf from the Yardbirds. They asked me to sing a song and play harmonica. We played a song, and it went well, and they asked, ‘Do you want to join?’

“I’d always been interested in putting a band together, but I didn’t know what I was doing. I knew them in school but didn’t know the play; it was a bit of luck finding those guys. A lot of our musical likes triangulated together. They knew a lot of songs that I knew, so we were able to play a bunch of covers from the get-go. Then they started introducing me to some other stuff. It came around pretty fast. We were surprisingly well-suited together.”

Barajas said once Wiseman joined on vocals, everything came together. It was shortly thereafter that they played their first show.

“I think it was probably at a party, one of the high school parties in I.B. We didn’t really care about getting paid, we were just excited to play.”

Wiseman remembered that one impediment to their growth as musicians was not having access to a professional rehearsal space. The neighbors of whichever parents were letting them practice in the garage that week invariably called the police.

According to Wiseman, “Xavier lived right across the street from Oscar, and whenever we’d get a letter from the police, we’d switch houses. We were constantly playing this shell game with the police. Finally, they got a petition to get us to stop playing, so at that point we went over to my parents’ house.

“Early on, we had a manager who was getting us these high school lunch gigs. The money was great at the time, and those were always fun. We played weddings. One of the weddings we played at ended up in a huge fist fight; the police were called. We didn’t know whether to stop playing or what, as these families were going at each other with chairs, fists, about 300 people altogether. 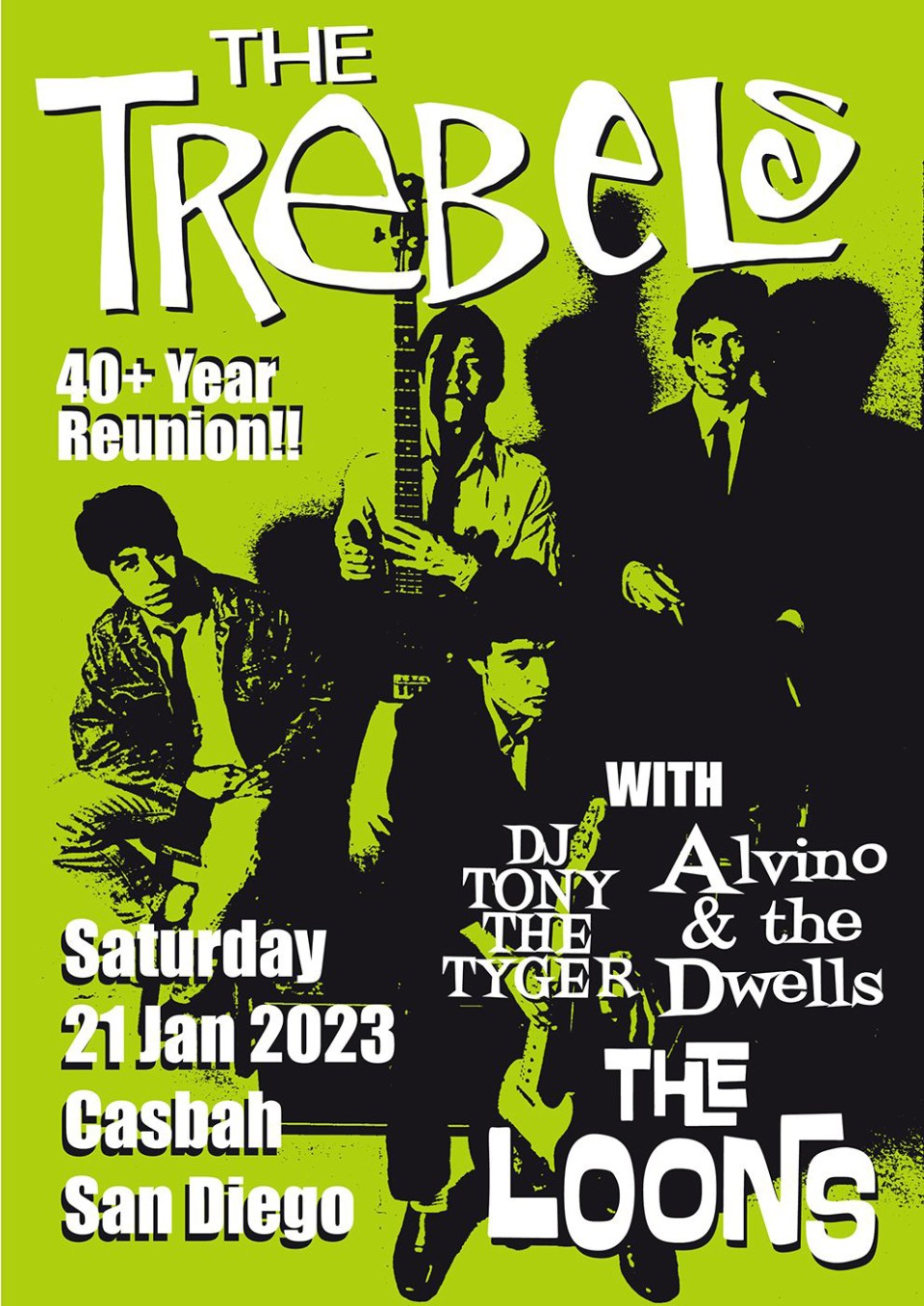 “We went up to San Francisco and ran into a bunch of skinheads at a mod show. They were walking in on us doing this kind of mod, ’60s stuff. At that point in time, those skinheads were pretty harsh—about 20 of them in a big group. They’d go and camp themselves right in front of us, just staring us down, just making us as uncomfortable as possible.”

But Wiseman said other than that one show, the Bay Area was good to the Trebels.

“The audiences were always really receptive in San Francisco. Looking back in hindsight, it probably would have been a good idea for us to move up there. But I was trying to go to university at that point, and everybody else had a job.”

Barajas said that after nine years of playing and not finding a ton of success, they agreed to call it a day as a band.

But then they got one last gig:

“We opened for Chuck Berry at the Bacchanal; that was our last show. We were going to quit, but we got this gig opening for Chuck Berry, who was obviously a big influence on the Trebels. That was very fitting.

“He showed up in this real fancy Cadillac or Lincoln. We met him backstage, he was nice. I brought his autobiography, and he signed it. He signed Xavier’s guitar. He was very nice, cordial. We didn’t hang out with him, but we just briefly met him. And he put on a good show—it was great! It was a dream come true. It’s something you remember for the rest of your life, opening for Chuck Berry.”

Don’t miss the Trebels 40-Year Reunion with Alvino & the Dwells and the Loons! Saturday, January 21 at the Casbah.