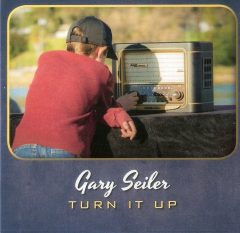 Gary Seiler plays what can only be called country beach music. His bio says he learned his craft “in smokey barrooms in the 1980s,” and during more than three decades of writing songs he has released four albums—and he has also sailed all over the world. His new release, Turn It Up, represents not just 11 new originals (he wrote or co-wrote all of the music), but a comeback after spinal surgery last year robbed him of his singing voice; months of therapy brought it back and the new project shows that his vocals are as strong as ever.

Seiler opens with the title tune, a lively rocker with him backed by brisk drums, nicely layered guitars and pedal steel filling the gaps. He relates his musical life story, name-checking influences like the Beach Boys, the Beatles, Poco and the Eagles—“the heartbeat of my life is all of those harmonies.” Dedicated to his wife, Audrey, “Tell Me” is a love ballad that floats on air, with Seiler almost crooning as he expresses his deep-felt love for the woman in his life.

“Why can’t we be like the horses and the cows?/ Why can’t people get along?” echoes an observation by Seiler’s grandson on “Horses and Cows.” Its positive message is delivered with harmonies and a nice guitar break by Jim Soldi. The Buffett influence comes to the fore in “Tropical Blues” and “Ukulele Shuffle,” which would both fit as album tracks on one of his albums. “Tropical” is a breezy beach song with backing vocals that soar, with Seiler relating that “Buddy Guy and BB King, that ain’t the kind of blues that I’m going to sing/ Ain’t got no Memphis or New Orleans inside these blues.” “Shuffle” includes a solo played on a uke and good-timey lyrics about Hawai’ian beach life.

Seiler wrote “The Old Man in the Chair” about his father, a WW II veteran who “met a girl who took some of his pain away…raised a house full of kids with a wife he adored.” Now in his sunset years, he sits mostly silent, anchored to a chair on the porch—but Seiler wants to remind everyone of his significant life accomplishments. “One More Honky Tonk” sounds like it should to be played in one; a toe-tapper about juke box heroes like Merle, Patsy, and George Jones. Caplinger’s fiddle playing and nice pedal steel take it up a notch, while horns add punch to “Chasing Cherries,” an up-tempo song about pursuing love in life— and how it pays to “pick the sweetest one.”

Gary Seiler’s new album is a great listen that should appeal to both country and beach music fans.

STEPH JOHNSON: So in Love