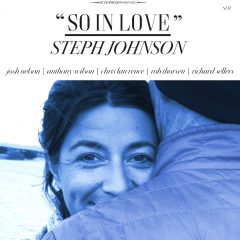 It was just about 10 years ago, at the now-defunct KSDS/ Ocean Beach Jazz Festival, when I first heard the soulful songbird Steph Johnson work her magic on a thoroughly rapt audience. Ms. Johnson clearly had something going on—and I was fascinated to see her start a new trio some months later with the stalwart bass man Rob Thorsen and young drum phenomenon Fernando Gomez.

Johnson has a huge and compelling voice and she has consistently continued to grow as an artist, yielding such gems as Nature Girl with her trio and Music Is Art fronting an expanded band under the expert guidance of Grammy-winning producer Kamau Kenyatta.

As much as I enjoyed her earlier efforts, Johnson’s latest offering, So in Love, is the album I’ve always dreamed she was capable of. She’s super relaxed and at the absolute top of her game—and that gorgeous instrument, which always evokes Virginia tobacco and Tennessee whiskey in my head. She’s actually more of an organic fruit and veggie girl, who has finally found the perfect group of accomplices.

Rob Thorsen (now her husband) is the heart of the band, alongside the incredibly tasteful drums of Richard Sellers. For this album, Johnson has added L.A. heavyweights Josh Nelson on piano, Anthony Wilson on guitar, and Chris Lawrence on trumpet and flugelhorn. All of these cats perform superbly in support and they provide just the right amount of color and interest to elevate the music to a higher plane with their stellar solos. The combination of Johnson’s fully mature voice and this superb ensemble make for wonderful music that stays with you.

Lawrence makes an early and favorable impression on the opening “Lazy Afternoon,” propelled by the crisp drums of Sellers. The singer sounds completely in her element (ironically, she originally intended these contributions as “scratch-vocals”) but she wisely decided to stick with them when she heard the results.

Nelson begins “I Wish I Knew” with a remarkably swinging essay, and immediately two truths become self-evident: first, Johnson has acquired the wisdom to interpret the lyrics with devastating honesty, and second, she has marshalled her instrument in a way that allows her to really lead the band with authority.

Wilson commandeers the exuberant “Here’s To Life” with warm, resonant chords, and when the band joins in—the groove becomes paramount. The connection between Johnson and Thorsen emerges at several moments on the album, perhaps especially so on “I’m Gonna Lock My Heart,” which pulses with pure joy.

Joni Mitchell’s “A Case of You” is a daunting choice—but Johnson has reached a point in her career where her version rings with both ethos and pathos, and I cannot hear it without shedding a tear.

GARY SEILER: Turn It Up