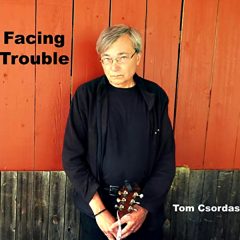 Tom Csordas teaches anthropology at UCSD, and he writes protest songs. He has released a double album of songs about a variety of today’s issues, available only on the web, Facing Trouble and Facing Trouble Part 2.

The first album is a four-track set, getting the listener familiar with Csordas, who sings and plays acoustic guitar, accordion, kazoo, and harmonica. Recorded by Jeff Berkley, the songs are delightfully lo-fi for the most part. Mark Intravaia plays guitar, and Berkley, Rick Nash, and Josh Hermsmeier play bass and drums. The six songs on Part 2 are played by Csordas, Nash, Hermsmeier, and appearances on fiddle by Dennis Caplinger.

Csordas wears his progressive politics on his sleeve, and the titles reflect this. “Climate Song” opens and recites the problems that we and our children face from the effects of fossil fuel. As elsewhere, the guitar accompaniment and harp effects are merely a melodious framework for the lyrical sermon—this time about the need to “clean up the dirt that’s floating in the sky.” “The Battle of Aleppo” pulls no punches about the humanitarian cost of the Syrian war, about orphaned kids whose parents were blown apart by barrel bombs; in the same vein, “Immigrants and Refugees” follows and chronicles the crisis that results from conflicts like Aleppo’s.

“Universal Coverage” is interesting, an electrified blues number that targets the debacle that is America’s health care situation. Intravaia’s slide guitar leads the way, the words are almost clumsy, riding the blues groove burdened with lyrics like “People need to have health care; ain’t it time we had a heart.” Csordas’ soapboxing throughout is urgently appropriate.

Part 2 is more of the same. The title tune is a seven-minute magnum opus, a medium tempo rocker with drums and bass joining Csordas as he relates a litany of occurrences that include Three Mile Island, Chernobyl, the refugee crisis, and senseless mass shootings. “I will resist the turning of the screw/ Seven lean years now are nearly through.” The 1979 arsonist burning of black-owned businesses in Durham, North Carolina inspires “The Burning of Hayti”, a hate act that Csordas’ unflinching indictment repeats, “Who lit the torch?” Another 1979 North Carolina hate crime is “Greensboro Massacre,” about the murders of five left-wingers by Klan and Nazis—and their subsequent court acquittal. It’s another one that hits almost too close to the here and now.

“Tear Gas on the Border” should hit home with San Diego listeners, a simple folk song about child refugees from the gang hell of Central America who walk hundreds of miles to a possible asylum, dream-only to be gassed, “Kill their dreams and send them back to die/ We see you and won’t tolerate the lie.” The project wraps with “Really Had Enough,” using a Western swing framework to tell the listener that the fascists faced in WW II are back, “They weren’t gone, they’ve just been hid.”

Facing Trouble, both parts, is music for our time in the tradition of protest songs that we don’t hear enough of lately.

GARY SEILER: Turn It Up