This month we catch up on reviews and starts with the latest edition of Strange Stage Stories:

Matt Hensley / Flogging Molly: “We were playing at the O2 center in London (02/14/14), opening for Frank Turner, and in the middle of our set our huge back drop that has (our logo) on it fell down on our drummer George , who continued to play the song until the end! It was the craziest looking thing to see. Luckily no one got hurt.”

Israel Maldonado: “I fainted one time when I was in Iowa playing with Agua Dulce after going on a run that same day in super humid weather.” 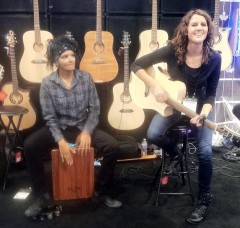 Lisa Viegas / Sister Speak: “Police Officers stormed the stage at our first show in Key West, FL in 2010, and hand-cuffed the whole band in question of grand theft over a complete accident, which was made clear in the aftermath.”

Angela Alvarez — Someday (self-released)
Classic rock in all the right sense of the phrase. The three songs would hit well with fans of Scandal, the Bangles, and so on. Alvarez has a way with a song hook, with a good variety to the three tracks on offer. Opener “Someday” is a classic indie / power pop tinged rocker, while “Not Waiting Around” has a touch of rockabilly mixed with Mancini-vibes in its harmony-laden 2:58. Finally, “Your Lies” is a more jangle oriented rock tune, that really shows off both Alvarez’s song writing skill and voice. Built on a hypnotic piano riff and a climbing chorus, the song is elevated by a terrific bridge starting at 2:26, with a particularly sweet note from Alvarez at 2:39. Those bridges are a strength with Alvarez. All three tracks are good, but the top track here is “Not Waiting Around,” a perfect pop single, down to it’s timing. Nice.

Damcyan — s/t (self released)
Metal through and through. Ran into a couple of these gents at Metal Swap Meet, who tell me this album will remain a one off. That’s a shame because it is pretty good. To be sure, this is intense stuff, not for the faint of heart. Band mvp is easily drummer, Mooks, whose adrenaline- filled work drives the album, but what really sets the band apart is the use of piano and acoustic guitar. There are some nice tempo shifts, prog touches, really good guitar riffs, tasty keys topping things and, best of all, the recording and mix is nice and clear — great! Favorite track is probably “Diabolical Indignation,” which starts off with a haunting piano lick before the heavy metal thunder starts at :36, but “Demise” with twin leads and synth overtures, is also really good. This is a solid disc — the dozen songs are well crafted and all have their charms. If you are a metal fan or just like music that’s made to play at maximum volume, this disc will make your day. 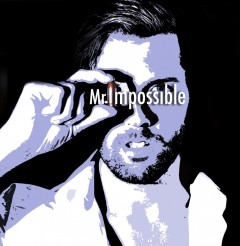 Blaise Guld — Mr. Impossible (self-released)
A three-track EP, with bonus fourth track remix version of the lead track. The first impression, via opening track, “Seraphim,” is of a vintage crooner, Dean Martin type recording, complete with scratchy vinyl noise and retro mandolin intro, before it kicks in to a modern soul, power ballad with splashes of electronica and Latin rhythm. Given the right circumstances, it’s a smash hit, a la George Michael, Ricky Martin etc. “Candyworld,” heads into Bowie-esque territory, while “Mr. Impossible” ramps up the rock quotient in the music, before adding a heavy dance element that reminds me in places of a modern take on bands such as Styx and Queen. The second version of “Seraphim” is good, with a more standard production, but the first one is a masterful piece of pop that should be a hit for Guld, but also sounds like a possible future standard — certainly I could hear the likes of Santana covering it. If you’re a fan of modern pop rock, this is highly recommended. 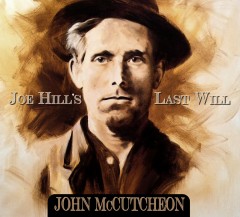 John McCutcheon — Joe Hill’s Last Will (Appalsongs)
Wonderful from concept to execution. File under Americana, folk with occasional Celtic influence as well, Joe Hill (1879-1915) was a songwriter. Interestingly, Hill borrowed tunes, both contemporary and traditional, creating new works in the process, whose very titles give it all away: “It’s a Long Way to the Soup Line,” “The Preacher and the Slave,” “There Is Power in a Union,” songs that deal with labor and unions, workers’ plight and ultimately, the human condition. What we have here is a tribute album and it’s a good one. Drawing a clear line from Hill to Guthrie to Dylan to Springsteen, the album sounds great, with a warm tone on both the acoustic and the full band numbers — 19 musicians take part — wrapping up in the same manner as any number of socially conscious concerts, with a giant sing-a-long, in this case including amongst others, Tom Paxton, Holly Near and Tom Chapin. The title track is exactly what it says, Hill’s last written words, set to music by McCuthcheon himself. Hill’s story is fascinating and well worth investigating, suffice to say that the album’s liner notes explain that these words were handed “through the bars of his cell to a guard at 10 p.m. the night before his execution on November 19, 1915.” There’s a movie there to be made and this is the perfect soundtrack. 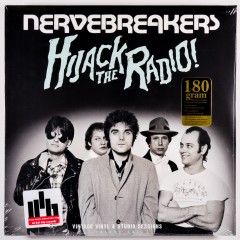 The Nervebreakers — Hijack the Radio (Get Hip)
You need this! Filed under punk rock, but this will make fans of garage, power pop or rock ‘n’ roll, drool — a 15-track collection of tracks recorded between 1975-1979. The title track kind of says it all (it’s also included in a demo version), but c’mon, there are tracks called “My Girlfriend Is a Rock” and “I Wanna Kill You,” so you know this was the product of snotty, youthful, angst. These cuts were originally scattered across various compilations and singles, so as might be expected for a compilation which covers a span of years and many recording sources, sound quality varies, but it’s nothing distracting. There is only one cover amongst the tracks, and it’s a killer — a storming version of the Troggs “Strange Movies.” If you are a fan of any of the genres I mentioned above, you’ll absolutely love this album. Anyone who has followed the Nervebreakers through the years will love having all these tracks in one place, but any novice music archeologists (aka new listeners) will love what they find as well. 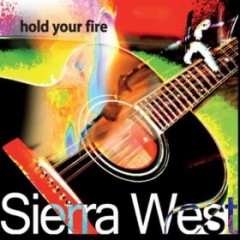 Sierra West — Hold Your Fire (self released)
Sierra West’s debut, five-track EP, showcases her strong songwriting and wonderful voice. The clear single here is “In Your Hands,” a driving, near power pop, tune that is pure hook and melody, with a nice bridge to boot,. “It’s About Time” a moody, melancholy song, reminds me a bit of Innocence Mission, it’s a wonderfully atmospheric track. Yep, there are a lot of singer-songwriters out there, but West is special. Gifted with a wonderful stage presence, her songs can take on a confessional tone, her voice carrying a lot of emotion. Well worth hearing, the EP accomplishes everything it was supposed to do, impressing the listener and leaving them wanting more.

Various Artists — There Must Be a Hole in Your Memory: A Tribute to the Sound and Adrian Borland — (The Beautiful Music)
A 17-track / 17 artist compilation, this works on two levels. If you’re a fan of The Sound and/or Adrian Borland, who passed away in 1999, then this is nirvana. The album sounds great with excellent performances across the board. On the other hand, even if you’ve never heard of Borland and Co., it’s a terrific work — great songs are great songs. My favorite cut is the closing, driving rocker, “Missiles” by Temporary Thing, with Robert Scott’s “Party of My Mind,” a close second; it reminds me a lot of a revved up Jonathan Richman. Also pretty darn great is the Last Burning Embers take on “Heyday,” which echoes a punk 1979 feeling, with hints of Buzzcocks, Devo, Wire, and Gang of Four in their attack-killer stuff and the track that tips this comp from pretty good to essential. Indeed, even a cursory listen to the songs here, leads to the obvious question- why weren’t the Sound better known in their, well, heyday. Certainly songs such as “Counting the Days” were on par with the Church and other like bands, but such is life. By the way, the version of “Counting the Days,” here done by the band Easy is jangle pop perfection. I could go on, but suffice it to say that this album does everything it’s supposed to; present worthy new versions of Adrian Borland’s music and expose his music to a larger audience. This limited edition version of what will ultimately be released as part of a bigger project was released in support of a documentary about the life/music of Adrian Borland, Walking in the Opposite Direction.