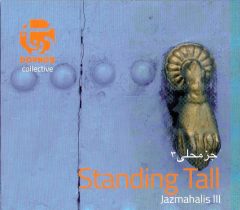 Dornob Collective is a local group of world music specialists who have been playing together in various combinations and releasing music since the 1990s. They play various genres of Persian music on instruments primarily associated with western jazz. Previous releases have included 2015’s Segah, focusing on traditional Dastgah modal concepts, and Electric Gulf, a 2014 look at Afro-Arab music. They have also released music based on pre-1979 Iranian pop standards, and their newest is Standing Tall, an interesting mix of originals and adapted traditional songs that convey both the common ground shared by this music and smooth western jazz as well as the distinct flavor added by the Persian musical conventions beneath the surface.

Most of the originals among the seven tracks were written by Farhad Bahrami (guitars, electric oud). Other members prominent in the sound are drummer Fernando Gomez, Hamid Radvar on keyboards and piano, Behnam Nowzar on bass, and Jesse Audelo on tenor sax and flute. It is Radvar’s electronic keys that convey the most Eastern-sounding atmospherics to several of the tunes, and Bahrami’s occasional sitar-invoking echoes of the oud. Much of the rest is curiously similar for stretches to fusion jazz with flourishes of funk, as Radvar, Audelo, and Bahrami variously explore scales that transcend association with any particular place on the map. Gomez also stands out, with flashes of Billy Cobham’s buzz-saw dynamics often apparent. The material varies and holds the listener’s interest, but one quibble is that the songs too often end before realizing their full potential.

“Arachaemania” starts off with oud, then keyboard statements over an exotic, electronic hook and surging drone-like melody. Like several of the songs here, it seems to end abruptly. Audelo does fine work on “Desert Blues,” which has a Persian signature melody and flights of hot sax improvisation, also ending too soon at three minutes, followed by the flute-centered “Ventana.” This simple but effective highlight somehow is reminiscent of Tim Weissberg and Dan Fogelberg’s instrumental pop efforts from ages past. A strange connection perhaps, but it is fully realized at nearly six minutes and flows like cream.

A Latin beat permeates “Samba B” as nifty unison Persian scales are played over the top of some madman playing by Gomez on a cooking dance number. The magnus opus here is “That’s the Way It Is,” a three-part suite that makes the biggest commitment to exotic Eastern sounds on the disc. The first section, “Ascension,” has percussion similar to tabla hand drums dancing with Bahrami’s distorted guitar lines and Audelo’s snaking woodwinds, and it achieves a hypnotic pattern. It becomes “Harwaya,” a hard-charging Kurdish piece that eventually becomes a sax and guitar jam. “Karoon” is a curious, building flute/drum showcase that closes the disc, another track with fusion jazz genes-and another that just seems to be taking off when it ends.

There is much for world music fans to appreciate on this disk.