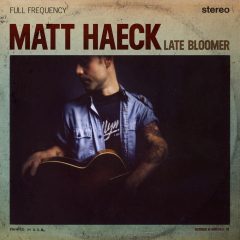 Matt Haeck has been appearing in local spots recently, playing alt-country originals from his CD, Late Bloomer. The album is billed as his debut, though Haeck has been around for a while and has released a 2008 full CD and a 2010 EP. The story behind his latest is that of a reboot, following some hard personal times. After recovery efforts, Haeck relocated to Nashville with a batch of songs that include some mentions of his struggle, complete with plenty of gospel influences in his music.

The new disc is Nashville slick all the way, all of the edges sanded off, and performed by a battery of session cats that surround Haeck’s vocals and guitar with five different electric guitarists and a hellacious pedal steel player. The dozen songs include two covers and a menu of personal, primarily first-person country ballads and light rockers that feature Haeck’s strong and earnest vocals.

The opener is “Tennessee,” a building country rocker that finds Haeck singing of his devotion to a lover, in whom he sees both the light and the dark. It is also over-produced, by the end of the 4-1/2 minute song, it is a mountain of distortion. Much better is “Minnie Pearl,” which frames Haeck with banjo and fiddle as he sings about being on the road with its drinks and fights, his place of refuge being old country songs, “Minnie Pearl, there ain’t no light/ So just drive me around/ The whole damn night/ We can sing a gospel song or two.” He kicks up some sawdust with the honkytonk-style “28 years,” about taking his leave of a longtime lover who “poisoned (his) breath.” It gets a boost from horns, accordion, and some blazing pedal steel riffs.

A deliberate ballad, “Couldn’t Say Yes (Till I Learned to Say No),” plods, but contains some insight into his life changes as he observes, “I’ve already crossed the bridges I’ve burned,” the song sounds soaked with regrets. A brisk shuffle, “Whiskey and Fast Women,” seems to be a nod to the great Sun Studio artists; it even has some distortion built into the vocal to match Haeck’s Elvis meets Jerry Lee intonations. The cats on hand fill the bridges with hot solos, and this highlight is fun right through the end, including the barely audible, “Ah, I f#*%ed up that part again” after the final fade. An interesting juxtaposition takes place on “Worst Enemy/ Ramblin’ Man” when Haeck sings his song about a Civil War soldier on the edge of despair, which continues with no changes to become Hank Williams’ “Ramblin’ Man” tune about being at home on the open road. Caitlin Rose joins Haeck for “Cotton Dress” and the result is another disc highlight, a soft, catchy song about down-home life on the occasion of the death of an elder. “Call the preacher down/ We’re goin’ in suit and gown/ Now we can be wife and man/ So call the preacher down.”