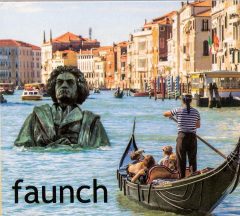 Venice and Beethoven is new music by Faunch (as in Andy Faunch). The LA-area multi-instrumental whiz put it together with Michael McClure, who contributed guitars and co-produced. Faunch sings, plays guitars, multiple keyboards, and percussion arrangements and wrote all nine originals. Both Faunch and McClure have San Diego area connections. Faunch, McClure and local producer/ musician Dave Blackburn (who mastered the disc) played in the same bands in England in the ‘70s, then in San Diego in the early ‘80s. Later in the ‘80s Faunch and McClure played in an LA group, And/And/And. This disc, played mostly by one person in essentially a home studio situation, is beautifully realized, right down to McClure’s art work.

The new disc is rock, but not the speaker-cranking variety. British ‘70s and ‘80s artists, including some of the better new wave and funk performers, have an influence on Fauch’s music. On “Lovin’ Is so Easy,” the opener, Faunch sings “Lovin’ is so easy when you’ve got it sussed out,” in a voice that recalls Human League’s lead singer Philip Oakley. “The Man with the Getaway Face” establishes a James Bond vibe in just a few measures, using acoustic guitars and mellotron, and takes off from there. With all of the bells and whistles of good spy thriller themes, it’s a highlight.

The first four minutes of “1984” float on a sea of synthesizers and sharp New Wave touches, “I’m gonna love you like it’s 1984.” The next three minutes shift gears into an interesting, competing interplay of synthesized funk beats from each side, then a sizzling, Prince-tribute guitar break by McClure closes out the memorable track. “My Beacon” is totally different; the slower, softer acoustic/ piano ballad shows another dimension of Faunch. Throughout, he has the ability to create an ethereal feel, the way Brit pop icons 10cc used to do on songs like “I’m Not in Love.”

There is a “side two” on this disc by design, and first of the that group is “Brother.” The influence of underrated British New Wavers XTC comes through, with a surging wall of guitars beneath angelic synths. When Robert Palmer recorded “Bad Case of Loving You” it opened the door for rockers like “Bad Influence,” an infectious guitar grinder that clicks on all levels and featuring a bridge with Faunch and McClure trading hot, quicksilver lines. The rock buttons remain switched on for Alex Harvey’s “The Faith Healer,” the only cover, working a great electric guitar hook and organ solo, and again getting the big sound with just one guy.

Another late disc shift of focus is “The Ghost of Glyndowr,” another highlight. Faunch tells the first-person story, in a dreamy atmosphere that conveys crashing waves, of an ancient spirit. Beheaded 300 years ago, “I won’t give you trouble, I’ll stay out of sight…maybe I’ll go out wandering tonight.” The song takes the listener to another place and time for 7-1/2 minutes.

Faunch’s Venice and Beethoven is a fascinating listen, and a must-have for fans of quality guitar and keyboard rock, especially those familiar with top ‘80s British pop.