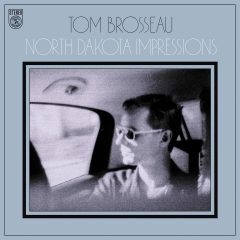 When last heard from on last year’s Perfect Abandon, Tom Brousseau was singing his striking original folk music in tunes recorded live, on one mic, on a stage in England with a small band, a bare-bones recording that fits Brousseau’s musical approach well. Originally from North Dakota, his music has an unhurried, intimate feel–one that has caught on, as he has released a dozen albums since 2002 and toured the world. His new one is North Dakota Impressions, a nine-track offering of originals that is part of a trilogy, which Brousseau began with his 2014 Grass Punks CD and has much the same sound and vibe as Abandon. It was recorded in LA, with just Brousseau (acoustic guitar, harp, vocals) and Sean Watkins, the multi-instrumentalist member of Nickel Creek who has five solo albums of his own, on various guitars, basses, and harmonies. The arrangements are spare, and the focus is on the tales that Brousseau weaves.

Opening with “No Matter Where I Roam,” Brousseau sings about travel, experiences, homesickness for the “waves of wheat” and a lover from the past. In the background Watkins adds tasty electric guitar in some of the empty spaces; it is a mellow but compelling combo. “Fit to Be Tied” is a simple folk song that is rendered on acoustic guitars with close harmonies; it opens with humming and wraps with harmonized “ooohs” that click on all levels. For “On a Gravel Road,” it is a slow, finger-picked minor key folk melody, again with pleasing harmonies; this time Brousseau is painting a story board. A couple drive out in the sticks to an uncertain fate, “No turning, no turning back at all/ Again she cries, ‘slow down.’” But he is bound and determined to show her, this night, his undying love once and for all. It has a haunting and surreal quality, the disc highlight.

After a pleasant bluegrass-inspired instrumental halfway through, “Slow and Steady Wins the Race,” Brousseau gets his down-home persona out for “A Trip to Emerado,” a talking folk piece that walks the listener through a trip to the area where his grandmother lives in the prairie, “Folks around here are hard working and good, there’s a general esteem for one another.” The tune adds to the sense of time and place that the rest of the disc strives for. Next up, a catchy folk tune “Nobody to Call My Own,” which has the niftiest hook heard on the disc, but also has a reverb effect on one of the guitars that distracts some from its impact. Broussard is surely a student of traditional folk, “The Horses Will Not Ride, The Gospel Won’t Be Spoken” is stark and simple, and built on the bones of long-established folk melodies and themes-the wistful tale of a burned down church and barn.

North Dakota Impressions is straightforward folk music, without efforts to cross over to other styles, kept on message, and well-played and arranged. Tom Brousseau’s music conveys wide open spaces and simpler life than most listeners are accustomed to.