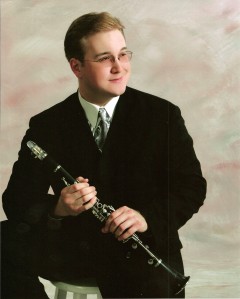 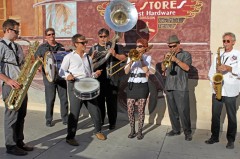 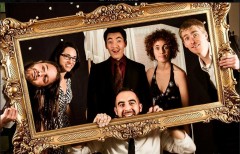 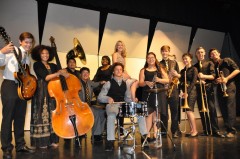 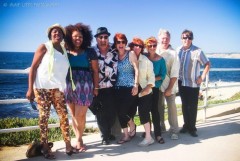 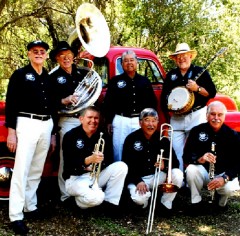 When Dave Bennett is out on the road — which is a lot — he needs enough luggage space to pack a sharp business suit and, perhaps, a pair of suede shoes!

Call it a case of dueling alter egos. On any given evening, with clarinet in hand, the Waterford, Michigan resident looks like the spitting image of the “King of Swing,” Benny Goodman. One night later, with hair flailing out of control, Bennett’s on top of the piano, bringing the energy necessary to pull off a song by “the Killer,” Jerry Lee Lewis. Goodman will once again be celebrating the sounds of the Big Band Era and Sun Records when he appears at the 36th Annual Thanksgiving Jazz Fest at Mission Valley’s Town and Country Convention Center.

Self-taught, the versatile musician started out as an artist. According to his online bio (DaveBennett.com), his immersion into music can be chalked up to one of life’s happy accidents. “In fifth grade, when the option to join the school band came along, I didn’t think I would be any good at an instrument,” said Bennett. “But the idea of playing intrigued me. And then my grandfather said, in a sort of ‘holy spirit’ moment, ‘I think you’d enjoy playing the clarinet.’ He just came out with it, and then he and Grandma went down to the local pawn shop and bought me a plastic Conn clarinet to try out.”

Bennett had an “instrument,” so to speak, but who would he listen to? Once again, Grandpa to the rescue. “Grandpa bought me a cassette tape of Benny Goodman — and that’s what did it. I completely flipped out: it hit me square between the eyes, and I knew at that moment that this is what I wanted to do with my life.” He admits that his peers had to be persuaded.

“Prior to music, my main interest was drawing and artwork, and I wasn’t listening to a lot of the music the other kids were into,” Bennett revealed. “When everyone heard I liked this music from my grandparents, they looked at me like I had three heads. But once I played it for them, they really liked it.”

The self-taught musical prodigy continued to soar in his teens. He played with the Count Basie Orchestra at age 17 and was only one of two guest soloists from an application pool of 600 hopefuls. In 2013, he performed with the New York Pops for the 75th anniversary of one of the most important milestones in American music: Benny Goodman’s 1938 concert at Carnegie Hall. Goodman converted the hall of mostly classical music fans to a new appreciation for jazz, and his band (full of stars like Harry James, Lionel Hampton, and Gene Krupa} certainly helped their leader seal the deal. “He was America’s first pop icon. Before the King of Rock ‘n’ Roll, we had the King of Swing,” Bennett said.

Bennett’s mastery of Big Band swing is well documented but so is his talent for capturing the big rockabilly train out of Memphis. The easy transition is testimony to Bennett’s eclectic nature. “Since my early teens I’ve been influenced by many other genres besides jazz,” said Bennett in his bio. Jerry Lee Lewis may be part of his own genre. “He is definitely one of the founding fathers of rock ‘n’ roll. Jerry is a stylist and has influenced many musicians after him,” said Bennett in an online chat with the Troubadour.

The more animated side of the Bennett personality will be playing the piano as a member of the Memphis Speed Kings on Saturday, November 28. They’ll be part of a lineup featuring the Red Skunk Band, Sweethearts of Swing w/ the High Society Band, and Sue Palmer and her Motel Swing Orchestra. The most popular event of the Thanksgiving Jazz Festival is the Saturday Night Swing Extravaganza, with this year’s Battle of the Bands pitting Stompy Jones versus Jonathan Stout and his Campus Five. There will also be swing dance demonstrations by Joel Plys and his Hang Ten Hoppers.

Once again, San Diego musicians are well represented at the jazz fest. The local artists include the Euphoria Brass Band, the Mission Bay High School Jazz Preservationists, the Dixie Express Jazz Band, the Heliotrope Ragtime Orchestra, High Society Jazz Band, Sweethearts of Swing, and Sue Palmer and her Motel Swing Orchestra. The Thanksgiving Jazz Festival is just one of the yearly calendar of events sponsored by the AFCDJS, an organization devoted to providing educational opportunities in jazz to all age groups.

The Festival will run from November 25 through 29 at the Town and Country Convention Center. Dave Bennett wouldn’t miss it; “The people are so warm and there is a lot of love in the atmosphere.”

Walking the Straight and Narrow with Chris Hillman