January 2023
Vol. 22, No. 4
Cliff Keller: Music Community Activist Stands Out by Lindsay WhiteJune 2012
Back with a Bang! Java Joe's Reunion at San Diego Folk Heritage by J.T. MoringJune 2012
Book Review: The Philosophy of Modern Song by Bob Dylan by Ted BurkeJune 2012
Rick Nash: Bass Man in Demand by Wayne RikerJune 2012
Mod Revivalists the Trebels to Reunite for 40th Anniversary Show by Jim TrageserJune 2012
If Music Be the Food of Love, Play On: Dually Noted Pairs Fine Food and Fine Music by Paul HomiczJune 2012
Harold in the Land of Jazz by Bart MendozaJune 2012
Sephardic Dance and Music by Yale StromJune 2012
Loretta Lynn: A Special Tribute to the Queen of Honky Tonk by Terry Paul RolandJune 2012
Ben Grace Gilmore: It's All About Building Community by Sandé LollisJune 2012
Advertisements 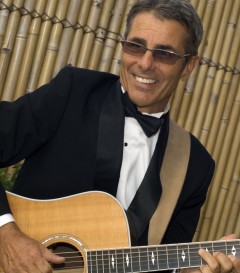 Abundant positive energy is what first drew me to Cliff Keller over two years ago. I was busy wallowing in my own personal despair when my friend and fellow songwriter Nick Z swooped me up one Sunday and escorted me to Encinitas for a revitalizing field trip to the Self-Realization Fellowship Temple, Lou’s Records, and Wine Steals. (Forget church, that’s a holy trinity). On the way, Nick mentioned he’d like to stop by his friend’s house in Cardiff to discuss the details of a potential house concert. Suddenly I was sitting in a gorgeous living room, overlooking a beautiful ocean landscape, talking about music, and drinking an ice cold beer given to me by my new friend Cliff Keller. He was chicken soup for my soul, and I wanted to know the ingredients.

Cliff Keller, 56, enjoyed a typical middle-class upbringing in La Mesa. His love of music grew as he did, first taking shape via tennis-racket-turned-fake-guitar “performances” while listening to the Beatles and taking turns mimicking the Fab Four with his posse of 10-year-old friends. This naturally progressed into typical teen angst songwriting. Eventually, Cliff moved on to home recording, where he began to take the craft more seriously.

After graduating from San Diego State University in 1979, Cliff embarked on a successful career journey in the tech sector, holding high-level jobs throughout Europe for six years. Says Cliff, “I was fortunate in my career; I left the industry as a full-time worker seven years ago when my employer was gobbled up by a behemoth. I still consult for a couple tech companies, but I now have more time to do the things I really love, including music.”

Cliff’s good fortune translated into great fortune for the entire music community. His efforts to bring fellow musicians together reach far and wide throughout the region. Five years ago, Cliff founded the San Diego Songwriters MeetUp. “I wanted to find a place where I could meet other songwriters who would actually listen to my songs and give me feedback, and hopefully collaborate writing and performing our songs,” says Cliff. “I had recently heard about MeetUp and I liked their format: using social media and the web to find people with common interests but having the meetings face to face versus on-line.”

The group, which meets every other Wednesday at 7pm at New Expression Music in North Park, considers an array of topics within a variety of formats that are helpful to songwriters at every level. These topics include recording tools, lyric-writing, composition, social media, and more. Knowledgeable speakers are invited to address the group on a regular basis, and cross-organizational collaborations are a regular occurrence. Every six weeks the group partakes in Listen Local San Diego’s The Game, where host Cathryn Beeks provides a song title, a deadline, and a location for all to come and perform their creations. The MeetUp group will also be involved in the San Diego 48 Hour Film Festival this summer. Cliff explains, “We provide an easy one-stop shop for the many film makers to find original music. It’s a blast to go to the big cinema and hear your music playing in a scene.”

The San Diego Songwriters MeetUp group has met over 100 times and boasts more than 560 local members who are clearly benefitting from the welcoming, non-judgmental, collaborative environment Cliff has helped create. “Collaboration is effective and fun, no doubt about it,” says Cliff. “Think about all the incredible songwriting teams, now and in the past. My recommendation for collaboration is to leave your ego at the door, be open to new ideas, don’t have a million-seller hit as the goal, and try to find and leverage each person’s strengths.”

Cliff’s absolute favorite thing about the San Diego Songwriters MeetUp? He met his wife Karin there. “I was super impressed by Cliff’s ability to run a meeting,” says Karin. “He kept it fun and on track, creating a welcoming atmosphere where people felt comfortable sharing. As I got to know him more I fell in love with his joy, humor, incredible energy and enthusiasm, honesty, intellect, compassion, and integrity.” Cliff gushes, “Our first real date was going surfing and then writing a song together. How compatible is that?”

Cliff and Karin (who were married in 2009 and write music under the name The Kellers) find that their partnership thrives on mutual passions and the ability to work as a team. Cliff explains, “Nearly every one of our songs over the past four years have been a collaboration. Karin helps me with lyrics and phrasing, and Iâ€ˆhelp her with the musical arrangement.” Feeling no pressure to stick to a specific genre, the Kellers write freely in any style they are inspired by, including folk, garage grunge, country, rap, soul, funk, and R&B. “We are constantly making up songs on the fly and singing around the house,” says Cliff. “Dirty dishes? We break out in song about it well before we get around to washing them.”

While you may not be able to catch the Kellers performing at any local venue other than the Songwriters Meetup location (they blame shyness), the couple has graciously opened up their lovely Cardiff home as a very popular house concert venue. “Let’s face it,” says Cliff, “it’s tough to get people to go out to clubs, and quite often the clubs are so noisy the experience is compromised. But it’s pretty easy to get people to attend a pot luck party with killer music. Our goal is to bring new fans who may not know the artists and typically would not go out to a club.” He even expresses interest in helping other would-be hosts, adding, “House concerts provide great music to an attentive audience, which is a win-win for everybody! If anyone is interested in hosting a house concert, contact me and I’ll help any way I can.”

So far Cliff and Karin have hosted around 10 house concerts (their home seats about 70 people comfortably) and have plans to continue hosting a new concert every six weeks or so. (Future guests include Barbara Nesbitt, Berkley Hart, and Lisa Sanders.) Relying primarily on an internal email list and word of mouth, these typically sold-out shows not only help expose local acts to new audiences and vice versa, but they are also a great help in generating income for struggling musicians. Powerhouse vocalist Tori Roze (who performed at one of the Kellers’ first house concerts with members of her band, the Hot Mess) jumps at the chance to show her appreciation. “Cliff Keller has a heart of gold and is the most genuine true music fan. What he has done to show love for the lesser known music out there is boundless!”

It’s clear that Cliff has found his niche in the music community by creating mutually beneficial relationships among friends, fans, artists, and neighbors. So it comes as no surprise that he continues this pattern within his own volunteer efforts. For the past four years, Cliff has been involved with Resounding Joy, a local organization that provides music therapy to those in need. Certified Music Therapists provide training to volunteers like Cliff, who then become active in the community. Over the years, Cliff has been able to provide assistance to both individuals at home and to groups in assisted care facilities. He says, “It’s so rewarding to see how much music can lift people, and in some cases heal them. Plus it gives me the ability to showcase my music to the most appreciative and wonderful audience you can imagine.” Noelle Pederson, Director of Education and Training with the organization, is quick to praise Cliff for his help, stating that he “has been one of Resounding Joy’s integral volunteers. He brings his love of music and creating community by leading several of our interactive music programs at older adult facilities. He spreads joy to everyone he meets!”

It became clear to me while researching for this article that many others share my admiration for Cliff’s positive demeanor and eagerness to help others. But I wondered how he might explain his own accomplishments. “My surfer personality is often my dominant trait,” Cliff offers, “but my background in business has taught me some skills that help me as an organizer: coming up with a common mission that is clear and achievable, organizing people to help and take part, keeping meetings on track even if it means being brusque sometimes, setting a timeframe and keeping to it, and constantly monitoring the progress and making adjustments if members aren’t getting what they need.”

Cliff’s balanced approach toward life is closely mirrored in his songwriting approach. He offers this advice when it comes to crafting songs: “Study it. Songwriting is so special because it uses your creative and your analytical skills. It’s great exercise for the brain and the soul. Remember though to have fun with it. Listen to songs you like closely…Everyone has influences; don’t be afraid to be inspired by them.”

At first, I became inspired to write about Cliff Keller because I was convinced that he was a medical marvel. I have been in a room with this man and his contagious positive energy enough times to suspect that something extraordinary must be going on with his DNA. Turns out the real marvel is Cliff’s ability to access happiness through a simple formula of hard work, creativity, adaptability, and community spirit. If the thought of having a positive outlook on life confuses, terrifies or even revolts you, I encourage you to connect with Cliff. Chances are, he’ll offer you an ice cold beer and help you get started.