January 2023
Vol. 22, No. 4
Video Archivist on the Move: Steve Laub by Bart MendozaJune 2012
Back with a Bang! Java Joe's Reunion at San Diego Folk Heritage by J.T. MoringJune 2012
Book Review: The Philosophy of Modern Song by Bob Dylan by Ted BurkeJune 2012
Rick Nash: Bass Man in Demand by Wayne RikerJune 2012
If Music Be the Food of Love, Play On: Dually Noted Pairs Fine Food and Fine Music by Paul HomiczJune 2012
Mod Revivalists the Trebels to Reunite for 40th Anniversary Show by Jim TrageserJune 2012
Harold in the Land of Jazz by Bart MendozaJune 2012
Sephardic Dance and Music by Yale StromJune 2012
Loretta Lynn: A Special Tribute to the Queen of Honky Tonk by Terry Paul RolandJune 2012
Ben Grace Gilmore: It's All About Building Community by Sandé LollisJune 2012
Advertisements 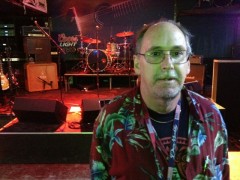 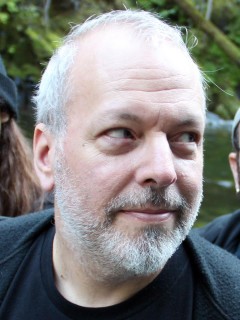 Technology being what it is, it’s no surprise these days to see someone filming a concert, no matter the size of the production. That said, it takes know-how and a true love of music to capture a performance just right. While there are a few people in town who have taped their fair share of shows, its likely no one comes close to the achievements of Steve Laub.

He began documenting the area’s music scene in 1996, with both national and local artists equally represented in his collection. Today the Del Mar resident is the video archivist for both Mike Keneally and Los Lobos, as well as the AMSD Concerts Series. While he doesn’t have an exact count on the amount of footage in his archive, Laub is omnipresent at local events with well over a 1,500 hours of footage in his archive.

Laub attends over 100 concerts a year, bringing a tripod and camera to just about every one. “Probably 97.5% of the time I have my camera with me. Sometimes if I can’t tape, then I don’t go,” Laub said. After 16 years of taping he admits to having slowed down a bit, though he doesn’t keep track too closely of his activities. “I’m now averaging about one or two shows a week videotaping, although it fluctuates. I taped three bands in the last six days.”

Early Days
Steve Laub was born in Cocoa Beach, Florida, but grew up in Winnetka north of Chicago, where he attended Jesuit prep Loyola Academy, followed by NIU. He eventually transferred and graduated from UCSB, arriving in San Diego via Los Angeles in 1982.

Now a resident of Del Mar, Laub’s move into videotaping came through his love of collecting live concert tapes. “I myself was never good at high-quality audio field recording, so I tried video, with the best possible audio, for recording a gig,” he said. In 1996 a friend bought a mono 8mm so he and Laub could capture a performance from the Dave Nelson Band. “Shortly after the show I asked to borrow the camera to shoot a band… and then another band… the rest is history,” Laub said. A fervent musical fan, he considers it his mission to record as much musical history as he can. “My impetus in general is to capture and have a record of those fleeting musical moments for posterity’s sake as well as documentation for the musicians,” he commented. “Historically, many of my friends have been musicians. I kind of consider myself a frustrated musician since I don’t seem to have the patience [to create music] and love live music, so this is one way I can participate with some sort of relevant value.” It’s a far cry from his day job as a quality manufacturing scientist, working on medical testing instruments.

Permission
One thing that sets Laub apart from most part time videographers is that he strives to get permission from both artist and venue to tape. “I can count on less than two hands the number of times I’ve been turned down,” he remarked. Sometimes being turned down might be due a current live DVD project a band has underway, or perhaps be due to contractual or copyright issues. “A trust factor is involved here, but for those interested yet hesitant, I carry a couple versions of limited release forms, drawn up carefully by a lawyer friend of mine, which formally state our relationship to the video documentation. It’s been used numerous times to facilitate comfortable documentation.”

Occasionally it’s an artist performance itself that’s the problem. “Other times I am declined, understandably, for circumstances that may not show the band off in their best light and on a night they might not want to be remembered for… singer has a sore throat, new drummer doesn’t know the material, and so on. While I do understand that apprehension, sometimes the artists may not be the best judge for a current moment’s worth in the future or the off-chance that something good happens despite the trepidation.” In a few extreme cases artists have requested a performance never be viewed again. “Hyper-critical, perhaps, but I will still reasonably adhere to such requests short of destroying the master tape,” he said.

“Most of the time, bands understand my motive is to preserve the moment in its best light at no cost to them other than allowing me to do my thing. Which leads me to mention my desire to be as unobtrusive or disruptive as possible. I don’t want to be a distraction to the persons or the event, while still affording some ‘money-shot’ possibilities to make it as compelling of an A/V experience as possible.”

Mike Keneally
If Laub is known for one thing, it’s his diligent work documenting the career of guitarist Mike Keneally. A major fan of Keneally’s work, Laub began taping him in 1999. “Since then I’ve taped nearly every single West Coast show (SD, LA, SF), two East Coast tours, and one set of shows over in Holland,” he said. “I started coming to his studio album sessions for his Dancing album in the early ’90s and have been in various studios videotaping the making of every album of his since to date.” He’s even taped promo photo shoots and behind-the-scenes footage at Keneally’s appearances on TV show such as CW-6 TV’s now defunct “Fox Rox” and KNSD’s “In the Square,” a morning news program. “I’ve filmed him just about everywhere. House concerts, guest appearances with other bands such as Rockola, when he plays the Beatles’ albums with them. I even taped his work with School of Rock when he was the professor emeritus and played with the kids at the endings of their recitals. I’ve taped him playing off the cuff in hotel rooms. I could go on and on, but I don’t even remember it all offhand.” He notes his camera work is on each of Keneally’s released DVDs.

Other Projects
Besides Keneally his footage has shown up in other projects. “It’s been used professionally by Chris Opperman, Bryan Beller, Lynn Drury, and Mem Shannon, among others. I’ve also done interviews with Grace Slick and Mountain Girl, Jerry Garcia’s ex. Some of that footage was used in an unreleased documentary by Sandy Troy called The Summer of Love.” He’s also done interviews with the Beat Farmers (Buddy, Jerry and Joey) for a documentary by Jamie Dawson called, Pay Up Cheater.Â  It’s also unreleased but has been shown around town and is posted on YouTube.

He notes that it’s difficult to keep track of footage once he gives it to a band. “I know some have been posted on their websites or YouTube. For instance David Hildago and Louie Perez [Los Lobos] have a band together and have used most of a show I shot in Poway on their website.”

Laub points out that doing multi-camera shoots provide a better idea of what an event was like, but are also far more labor intensive than a standard one camera shot. “There are many shows I’ve shot with multiple camera angles and additional audio sources, however it is cost and time prohibitive for me to work them up by editing it all together in post or, more likely, I’d have someone who can be paid to edit. So there are a number of potential projects should myself or the band involved ever have a benefactor or money budgeted for such,” he said

“I’m sure there’s more,” he says with understatement. “I shoot my friends who don’t otherwise play out live very much if at all, in their living rooms.”

Besides his work with Keneally, he’s proudest of being able to document artists that are just developing. “I like to shoot up-and-coming bands that I can find out about before they break big, like the early stuff I’ve taped by the Los Lonely Boys, the Secret Machines, Taylor Swift, and Jason Mraz.”

Legacy
What are his plans for this video treasure trove? “Enjoy share and preserve them for now,” he remarked. “Anything done with them would be in cahoots with the artist or with their permission.” Thinking ahead, he has considered the tapes’ ultimate fate. “It’s in my will to be dispersed back to the artists where possible,” Laub said.

After almost two decades Laub still gets the same thrill of taping a show, though he finds himself more selective. He considers that he has been to many live music spots numerous times. “I’ve shot in many venues and upon returning there I try to learn from past visits and improve my overall quality each time. Some venues only have so much potential while others afford better circumstances and better potential for high quality results. So I’m also thinking of venue combined with band, my schedule, other gigs in me deciding what’s fun to go see/hear/document,” he said.

“These days I’m a little more picky about trying to value my time versus what I’d like to shoot,” he said. “Partly to balance with and not affect my day job hours and partly to weigh the effort versus value to me and/or others.” Taping a band and getting it right takes hard work. “With having to get prior permissions lined up, setting up before gigs, and being the last to leave, it’s a commitment,” he said. “But it’s something I think I’ll always do.”