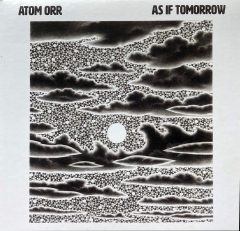 Atom Orr has released two new albums, As If Tomorrow and Afterimage. The band is the long established solo project by Christopher Hoffee that has released 17 albums of original music He has been a fixture on the local scene in this band and others for over 30 years, including Blacksmith Union, the Truckee Brothers, and Fivecrown. He also has his own studio (CHAOS Recorders), and this musical jack of all trades plays multiple instruments and does the recording, mixing, and mastering; the side players add contributions that fill out the arrangements of his interesting love songs that defy pigeonholing.

On As If Tomorrow, the program is 11 Hoffee originals, with Hoffee singing, playing guitars, piano, and percussion. Nine other musicians contribute everything from backing vocals to violin, cello, and viola (Molly Thomas); saxes, flute, and recorder (Martin Seiler); and drums (Matt Lynott). The songs are uniformly compact (only one longer than 3:38) and frequently include a maelstrom of instruments pulled together to create powerful crescendos as well as softer moments. Hoffee sings his poetic lyrics in a vocal that is not unsimilar to the resonance and power of Pearl Jam power ballads (like “Jeremy” and “Corduroy”) sung by Eddie Vedder from a quarter century ago, if one were to substitute the almost orchestral backing instead the overdriven guitars.

The title tune is a strong statement, sustaining an ethereal feel through buildups from acoustic guitar and violin to a backing choruses that give it an anthem vibe. “Black Wind” is next, with similar instrumentation and lyrics that are sort of a musical primal scream. “Underneath this shirt of woe beats a heart no grave could dig shallow.” The mood is sustained on “Deadfall,” which softens the full-bore attack just a bit, but has choruses that soar.

A softer, piano-based ballad that has pop hooks that grab the listener, “Into Thine Eyes” is a disc highlight that is a love song Hoffee style, relating to the object of his affection. “Run to me my love, run and I’ll catch you as you make the leap.” Another strong track early in the set, “A Waking Reverie,” has a primary melody that seems built on minor-chord chassis of a Celtic folk song. The sonics are totally different on “One Day Sun,” which is driven by electric guitar figures that are punched up by horn charts; the pace is brisk as Hoffee sings to a lover, “Love and lust are not the same/ If there was a word for it, it would be your name.”

“In the Night” quiets things down on another love tune that starts soft, then changes rhythm in mid-song as Hoffee sings about what he sees when he sees his lover asleep. The set wraps with two more interesting tracks. “The Bluebird Only Comes at Night” features pedal steel (Ben Zinn) that adds interest as Hoffee’s voice slides up and down, and the melody gets an injection of energy. “The Conjurer” is more deliberate with harmonies wall to wall on verses that set up more power ballad choruses. 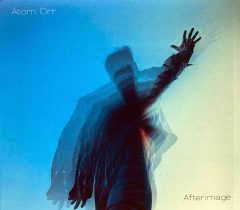 Most of the same studio crew is on hand for Afterimage, and the 12 tracks are all covers—well chosen from the worlds of classic rock, folk, and country and artists that include Bob Dylan, Bruce Springsteen, Leonard Cohen, the Kinks, and Tom Waits. The overall sound resembles As If Tomorrow, though on this disc, Hoffee tries, successfully, on some tracks to convey the impressions made by the original songs—which, if anything, is a strength.

John Denver’s “The Eagle and the Hawk” is a triumphant outcry of country power pop, and the magic is retained, with strings adding bottom and Hoffee’s excellent vocal driving the message home. “My Beautiful Reward” does a good job of capturing the underappreciated Springsteen track, and seems to realize that it doesn’t need much added to the original arrangement to sound just right. Ray Davies’ classic “Sunny Afternoon” is a light-hearted music hall favorite, and again without a major overhaul, though the pedal steel and fiddle flourishes sound great—proving the fact that covering the Kinks never fails.

Leonard Cohen’s “Suzanne” is more softly rendered, as Hoffee’s vocal is reverent and almost understated. This song has over the decades become a sort of hymn to the singer-songwriter community, and the version here shows why. Dylan’s “The Girl from the Red River Shore” is the magnum opus on this project, the Time Out of Mind outtake runs over five-and-a-half minutes, with Hoffee on acoustic guitar on the slow ballad, gradually joined by the rest of the studio band. It makes no attempt to emulate Dylan’s vocal but succeeds in reflecting the unhurried folk vibe of the original.

Captain Beefheart’s “I’m Glad” has another slower, personal vibe as Hoffee and some great female backup singers deliver another memorable arrangement that includes recorder, violin, and keyboards. The last two tracks were written by Tom Waits, “Who Are You?”, and Tim Buckley’s “Song to the Siren,” closing out four consecutive songs that are somber, laid back folk-flavored ballads that push most of the same buttons. The latter has a nice arrangement with strings and some vocal falsettos that help it soar.

Atom Orr’s two 2020 releases are a great opportunity to grab some well-crafted and played music that almost qualifies as an embarrassment of riches, while making a clear statement about the depth of Christopher Hoffee’s talent as a singer, arranger, and writer.