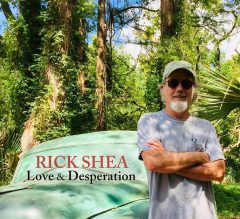 Rick Shea may be Southern California’s best kept secret on the Americana scene, but to those who have followed his 30-plus-year career, his poetic survey of the American songscape is something to shout about.

His new release, Love & Desperation, is proof positive of a well-earned reputation, Shea gives us a glimpse of the inspiration found in creating music during a year of a raging pandemic, racial upheaval,and a noisy polarized presidential election.

All the while, Shea’s album allows us to feel life on a Mexican coastline near an oasis with a plentiful watering hole. This collection could stylistically be described as Cantina Country. In the same way Hank Williams used roadhouse honkytonks to refine his soulful brand of country blues, Shea has created an album that brings a celebration of the multi-cultured diversity so cherished in Americana music today. From this home base, the album takes us down the back roads and alleys of great American music.

His voice carries the pedigree of his musical teachers, Merle Haggard and Jimmie Rodgers. It’s these influences that have been well-worn by him over the years to a place where the sound is distinctly his own. Love & Desperation does what the best country music is capable of in the worst of times: It lifts us out of life’s heartaches to a place of joyful blues, ballads, and a celebration of what is the best in all of us no matter our external circumstances.

There is not a weak song on this 12-track collection, recorded during the worst Pandemic in a century. The sessions were congregated from various home studios with the core guitar, steel guitar, and vocal tracks completed at Shea’s home studio in Covina, California, and added instrumentation from Shawn Nourse (drums and percussion), David Jackson and Phil Parlapiano (accordion), Dave Hall (bass), and Skip Edwards (accordion and Hammond organ).

The song cycle opens with foot stomping songs “Blues Stop Knocking at My Door” and “Blues at Midnight.” We then duck into “(Down at the Bar at) Gypsy Sally’s” with allusions to Chicago’s blues harpist, Little Walter, a bar named from a Townes Van Zandt classic and an atmospheric saxophone. The title track portrays the danger and outlaw themes familiar to the songs of Townes and Guy Clark in a way that is unique to this vital songwriter. “She Sang of the Earth,” is a portrait of transcendent love found in a moment of song as time just seems to be passing along with the rhythmic train-like movement of the tale. “Big Rain Is Comin’ Mama” and “World Gone Crazy” are inspired by the epic year of 2020, while “Mystic Canyon” portrays the restful, romantic feel of Southern California’s canyon country. The songs are joined together in their love for character, story, and loneliness found in the heart of the American ballad. Mickey Newbury would be proud.

Shea’s Love & Desperation continues the singer-songwriter’s road trip through the highways and byways of our current broken American landscape with grace and the kind of skill that is as timeless as it is timely.

CHRISTOPHER HOFFEE: As If Tomorrow and Afterimage