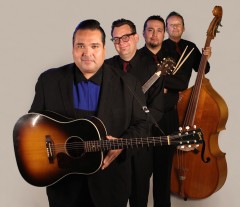 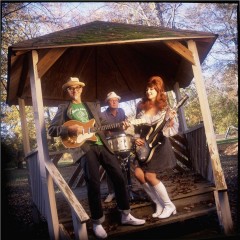 Southern Culture on the Skids 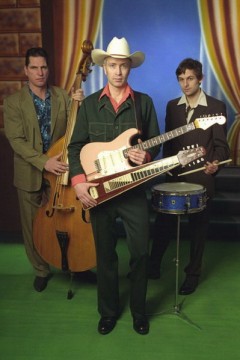 If you’ve come across a scratchy 78 record and heard a cookin’ Hawaiian band that would sound just as at home on the Grand Old Opry stage in Nashville as they would in a nightclub just one block away from Waikiki Beach, you are not alone. There is a connection.

It is this musical cross-fertilization that is the theme of year’s Tiki Oasis, scheduled for August 15-18 in San Diego. The Troubadour staff loves a mai-tai and a sunset concert as much as as anyone, and in the past we have covered this summer ritual as a revived form of lost Americana, when our citizens seemed more adept at having a good time. But with this year’s theme of “Hulabilly!” we feel our coverage is particularly appropriate as we champion the cause of rockabilly, western swing, and old school country in a typical calendar year.

“Hulabilly!” (“Hawaiian Hootenanny!”) is the latest conceptual theme of Tiki Oasis founders Otto and Baby Doe Von Stroheim. The official website provides this entertaining thesis statement on the phenomenon of “Hulabilly”; “Just as Tiki style is a blend of Polynesian influences as interpreted through Americans’ romanticized view of the South Seas, Hawaiian music has been sentimentalized and interpreted by American musicians. Like waves hitting the Pacific shores, America experienced recurring ukulele crazes with a longing look toward the Hawaiian Sunset. Similarly in the 1930s, ’40s, and ’50s Hawaiian slack-key guitar and slide guitar seeped into Western music and permeated the Nashville Sound. American musicians used that sound to play their own versions of Hawaiian music classics such as “On the Beach at Waikiki,” “Hula Blues,” and “Ukulele Lady,” and then form their own westernized Hawaii sound blending Hawaiian music influences with American early rock ‘n’ roll (bop) to create the sound of Hulabilly.”

Want to hear some examples? The website suggests Bob Wills and his Texas Playboys (“Hawaiian War Chant”) and a jumpy little number from by Elvis from the Blue Hawaii soundtrack (“Rock-a-Hula”). Although there wasn’t anything Pacific Islander in his gene pool, the late Marty Robbins cut many excellent Hawaiian tracks and Buddy Knox (“Party Doll”) had a fine rockabilly take on “Hula Love.”

Headlining this year’s Tiki Oasis will be one of SoCal’s most popular live acts, Big Sandy and his Fly-Rite Boys, who will be playing from 6 to 10 p.m. on Sunday, Aug. 18th in the Grande Ballroom of the HanaleiÂ  (AKAÂ  Crowne Plaza Hanalei). Adding to the honor bestowed onto them by the Tiki gods, the appearance will take on greater meaning as Big Sandy (real name: Rusty Williams) and the group are celebrating their 25th anniversary of playing country, rockabilly, and rhythm and blues.

The other musical acts playing over the weekend encompass quite a musical smorgasbord. The always unpredictable Southern Culture on the Skids has been described as “Dick Dale meeting Hank Thompson.” Chris “Sugarballs” Sprague and his 18-Wheelers revive the “Bakersfield Sound” of Buck Owens and Merle Haggard and the Hula Girls band combines Hulabilly with the reverb of a surf guitar.

Vocalist Kim Tsoy holds the distinction of being the first artist of Asian heritage to chart in the country music field. Two western swing bands — the Lucky Stars and the B-Stars — will be taking us back to Tulsa in search of the “San Antonio Rose.” Acapulco Radio embodies the high, lonesome sound so popular on today’s alternative country/Americana scene. Their mission is particularly admirable as they hail not from Mexico or Alta California but from Deutschland!

San Diego talent will be on display, and among the locals will be the Creepotixa (aka the Creepy Creeps), Jason Lee and the R.I.P. Tides (horror film music and surfing sounds), and the ukulele punk of the Cheap Leis.

Tiki Oasis ‘13 will kick off with the annual “meet and mingle” at Shelter Island’s Bali Hai Restaurant on Thursday evening, August 15th. The Hanalei will serve as the locale after that. Many of the events sell out early and reservations need to be made faster than you can say, “Book ’em Danno.”Â  Visit the official website at http://www.tikioasis.com/

Check Your Ego at the Door: Transformation and Rejuvenation at the Steel Bridge Songfest