February 2023
Vol. 22, No. 5
Birth of a Genre: San Diego’s own Fattburger helped create smooth jazz and showed what it might have been. by Jim TrageserJanuary 2014
Examining Bob Dylan’s Love Sick Blues by Ted BurkeJanuary 2014
John Densmore: An Invitation to Dance on Fire by Terry RolandJanuary 2014
A Father’s Day Story: The Courtship of Harry Nilsson’s Son, Zak by Terry Paul RolandJanuary 2014
Jazz 88 Keeps Pumping Out the Tunes: Station persists despite numerous challenges over the years, including Coronavirus by Michael J. Williams and Jim TrageserJanuary 2014
Me and Ronnie Earl by Eric LiebermanJanuary 2014
Lawrence Ferlinghetti: America’s Poet by Ted BurkeJanuary 2014
Q & A with Gabe Lapano: After the Rain and Beyond by Andy RasmussenJanuary 2014
Remembering Sam Hinton by Paul HomiczJanuary 2014
Band of Brothers: The Liggins Brothers by Bart MendozaJanuary 2014
Advertisements 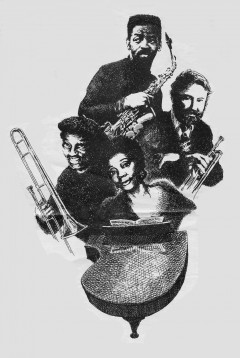 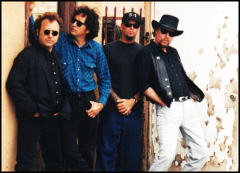 In September of 1982, I turned 21 in San Diego — able at last to legally enter any bar I wanted. Like most newly-minted 21-year-olds, the alcohol was the main draw. But also, like many young people of the pre-Internet era, I quickly discovered that most of the best live music was performed at the same places they served booze.

Among the venues I discovered that first fall of bar-hopping, four shaped my musical landscape, and continue to do so up through the present:

-Â  Bodies (over by SDSU), where the Beat Farmers held (a very raucous) court every weekend

-Â  Pal Joey’s on Waring Road in Allied Gardens, with the great Fro Brigham presiding over his New Orleans-style jazz combo on weekends

-Â  The Mercedes Room at the Bahia down on Mission Bay, where Sunday nights found Jeannie and Jimmy Cheatham hosting one of the great regular jam sessions in history — any given week might find members of the Basie band or the Tonight Show Orchestra sitting in along with Jimmy’s UCSD students and local luminaries

While none of those clubs exist anymore (the Bahia is still there on Mission Bay down the street from the roller coaster, but the Mercedes Room was long ago renamed and repurposed), the argument can be made the Old P.B. CafÃ© lives on more than the others because of what was happening in there most weekends while the Cameron-Gentry outfit was the house band.

While trumpeter Bruce Cameron was more of a straight-ahead player, when he invited saxophonist Hollis Gentry III to co-lead his longstanding band, he set in motion musical developments that nobody could have predicted. Gentry and Cameron hold-over keyboardist Carl Evans Jr. began pushing the sound toward fusion — but with more of an R&B vibe than anyone else had really done.

The result? Going to hear the Bruce Cameron-Hollis Gentry Jazz Ensemble was an event. Like seeing the Beat Farmers at Bodies, going to see the Ensemble felt like watching history. There was a buzz about the band — with the lines snaking around the Old P.B. CafÃ© to prove it (and parking was always a pain).

Inside the club was usually pandemonium, with the floor jam-packed. While most jazz clubs — see the Mercedes Room or Pal Joeys — had small dance floors in front of the stage with most of the floor devoted to tables; when the Bruce Cameron-Hollis Gentry Jazz Ensemble was at the Old P.B. CafÃ©, it was standing room only many nights.

And people were dancing. To jazz. For the first time since swing was king.

At the height of their success, the Bruce Cameron-Hollis Gentry Jazz Ensemble were San Diego music royalty. When the Padres beat the Cubs in the 1984 National League playoffs, it was Bruce Cameron on trumpet and Hollis Gentry III on alto sax who played the National Anthem at Jack Murphy Stadium for the first-ever World Series game in San Diego (against the Detroit Tigers).

But within a year of that high, Cameron left the group he’d founded and that had borne his name. The band changed its name to Fattburger, and self-released a self-titled album in 1985 (re-issued in 1986 as One of a Kind). A year later, Gentry, too, left — but the band by then was signed to Intima Records, and well on its way to national fame.

San Diego radio station KIFM had started a weekly show hosted by Art Good called “Lites Out.” Soon, the format took off — rebranded as “smooth jazz,” and by 1987 that was the full-time format of the station, which quickly spread to stations in other cities, along the way making stars of folks like Kenny G, Spyro Gyra, and Bob James.

Smooth jazz is a favorite punching bag of jazz purists and music critics. It provides easy condescension for those seeking a holier than thou high, and is generally dismissed as nothing more than a contemporary take on what our parents called “easy listening.”

But just as New Age once took in far more than the idyllic tinkling of Windhan Hill artists — in the early 1980s, the “New Age” label covered everyone from electronica pioneers Tangerine Dream to avant garde jazzsters Oregon to dance-ready world beat steel drummer Andy Narell — so, too, does the “smooth jazz” appellation smear more than illuminate.

Fattburger could play. Still can. They never stopped improvising on their solos, and if their music can make for a pleasant backdrop to dinnertime conversation, is there really anything wrong with that?

No less than blues and jazz tigress Jeannie Cheatham — a powerhouse blues pianist and full-throttled singer who could belt them out with the best in her heyday — once cut this writer off at the knees when he made some snotty, sneering comment about 1960s easy listening stalwart Ray Conniff.

“Don’t you make fun of Ray Conniff!” she said in a tone that pre-empted any thoughts of interruption, or even dissent. “That man makes beautiful music! Not everything in life has to be high art; everyone doesn’t have to be Ellington. Sometimes it’s enough to just come home and listen to something beautiful.”

So let’s put Fattburger down as a band that made more than its share of beautiful music and provided a romantic backdrop for many a happy couple.

Of the above bands, the Beat Farmers lost founding members Country Dick Montana (Dan McClain) and Buddy Blue Seigel, but soldier on with guitarist Jerry Raney, and former Penetrators Chris Sullivan (bass) and Joel “Bongo” Kmak (drums), still playing much of the band’s old playlist. Fro Brigham passed many years ago (although his drummer, Hollis Hassel, continues to gig around town). Jimmy Cheatham passed a few years back, and Jeannie is semi-retired from music now — although the many, many students of Jimmy’s who passed through those jam sessions continue to take that music to the world (folks like trumpeter James Zollar).

The old Bruce Cameron-Hollis Gentry Jazz Ensemble has also been thinned in the intervening years. We’ve lost both Evans and Gentry, although Fattburger soldiers on with Allan Phillips filling Evan’s old seat on keys.
And after leaving his namesake band, Cameron was in a Latin jazz band for several years – serving as the house band at Croce’s shortly after Ingrid Croce opened her landmark Gaslamp Quarter club. He also became a respected merchant of model railroading in East County and still volunteers at the San Diego Model Railroad Museum in Balboa Park. Most recently, he’s part of the house band at KSDS Jazz 88’s Sunday evening jam sessions.